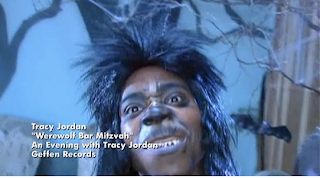 Too much good tube on Thursdays.

There I was, ready to smooth over the rough edges of my post (l had a harsh editor as a child) for The House Next Door's must-read close-up blogathon, figuring I'd have plenty of time to do so with only a half-hour of 30 Rock and thirty more minutes of The Office to delay me. Little did I know that The Office was another hour-long saga (and one more step forward to old form following the dud opening week). Then lo' and behold, I remembered that Mad Men was on after that with this season's penultimate episode! (It was great, though I think too much is being made about the series allegedly following The Sopranos template, as if Matthew Weiner can't think for himself). Didn't get much sleep that night, but too many great moments to mention made the evening worth it. Here are four that come immediately to mind:

2. Andy's courtship of Angela on The Office, culminating in his wonderful rendition of "Take a Chance on Me." Ed Helms' best moment yet--namely that he played it seriously and not just for laughs--and the high-point of the season thus far.

And finally, the scene that made me laugh the hardest:

1. Bert Cooper's devastating reaction to Pete's revelation about Don Draper's secret identity on Mad Men: "Mr. Hammond....who cares?" It was pure catharsis, somehow both surprising and completely true to the nature of this cliche-bending show.

Well, I had no pressing deadlines Thursday night and knew I had a long day looming on Friday, so I wanted to catch something funny on TV, but my heart sank when I heard that "The Office" would be another hour-long episode. I hadn't made it through the entire hour last week, but this time there were a lot of fun things going on. I guess I'm warming up to these characters again and it's the little moments with the individuals from this large cast that make that happen for me. I have three favorite bits from this episode: 1.) Darrell fending off Dwight, casting him out of Kelly's office, and telling him to go back to his desk and sell paper by the case like a real man. That was a great heroic moment for that character, 2.)Andy's song for Angela, the first time I think I've seen this character do something that seemed sincere and be more than just snarkiness, so a new twist for that character, and 3.) Angela's protracted, controlled, bitchy riff explaining the differing qualities of spoons and forks for Phyllis. I think the actress was enjoying these very fun lines.

All the cast seemed to be having more fun and so I did too, for the full hour.

Those were some great examples that I'd forgotten. Maybe they'll have more for Craig Robinson (Darrell? Darryl?) to do this year. With that monologue as the nightclub doorman in "Knocked Up," he proved how great he could be.

As you indicated, this show is at its best when they let all the characters lead their own independent lives, rather than just reacting to Michael's idiocy or blathering about Pam and Jim.