Where God Lives (The Tree of Life)

Anyone who has ever prayed to God and/or cursed His name (i.e., almost everyone) may find themselves as overwhelmed as I was during the "creation" sequence of
The Tree of Life. Then again, you might hate it. This twenty-minute passage -- a lavish CGI set-piece documenting the origins of the universe -- has received several conflicting interpretations, the most dismissive from the peevish Barnes & Noble clerk who informed me that Terrence Malick had stopped the narrative cold for a "NOVA episode." That initial prologue, however, is what separates Malick's digression from a nature special: the patriarch and matriarch of the O'Brien family (Brad Pitt and Jessica Chastain), living in Texas circa. 1950s, receive news that one of their three sons has died. Overcome first with grief, followed by the inevitable Malickian interior monologues, the voices of the bereaved O'Briens rise on the soundtrack and continue skyward to the stars. We don't know how their son was killed, much less "Why?", but as we watch the cosmos, the oceans, the volcanoes, the Earth and its early inhabitants come into being, a thought springs to mind: God may be too busy to listen.
I have no idea if that's what Malick wants us to think. Indeed, a rough outline may make The Tree of Life sound like the kind of "Christian movie" evangelicals would long to release. (Baptisms, sayings-of-grace at dinner, the oft-cited example of Mother O'Brien holding one of her children, pointing to the sky and cheerfully exclaiming "That's where God lives!") The overall tone, though -- as the movie shifts from a creation epic back to the story of the O'Brien household years before their family tragedy -- is non-denominationally spiritualist, transcendentalist, Deistic. If there is a God in The Tree of Life He doesn't intervene, yet Malick intimates over and over again that Something is out there, visualized in the opening and closing images as a portal of light that's as awe-inspiring and unsettling as the monoliths in 2001.
If Malick is conversing with Kubrick in the heavens he seems to be speaking to Spielberg on the ground. His work with his preteen actors -- especially Hunter McCracken, who portrays the central character, eldest brother Jack (Sean Penn plays the grownup version of the character, forgettably) -- rivals the thrilling spontaneity of the youthful cast of E.T. The trio of O'Brien sons are raised by their dreary Father (Brad Pitt) to be dutiful and disciplined; naturally, they respond by going on the prowl with other neighborhood kids I recognized only too well. They hit each other and wrestle, shoot BB guns and throw rocks through an abandoned house's windows, blow up bird eggs and tie frogs to bottle rockets. Spielberg captured how the world is experienced by a child while I was growing up; Malick reminds me of how it felt then, now. 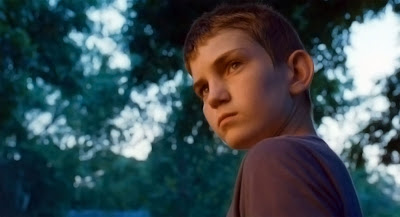 Did childhood feel as fragmented as The Tree of Life depicts it, though? In a superb piece deserving of more attention, Matt S(chneider?) of the fine blog Catecinem argues that the revered Terrence Malick and the reviled Michael Bay actually have a "shared sensibility." Matt explains that the constant jump-cuts in The Tree of Life gave him a headache, undermining his admiration for the film's artistic ambitions; whereas he sort of enjoyed Bay's equally choppy technique in the latest Transformers movie. Matt isn't claiming that Transformers 3 is a "better" movie than The Tree of Life; what he's suggesting is a double-standard by critics and other moviegoers. "The way Bay shoots an action scene is stylistically akin to the way Malick shoots a pair of boys wandering through a neighborhood," he writes. "Yet the former is incoherent hackery, whereas the latter is stylistically ambitious....Again I ask: why?"
That's a good question, albeit one that I think answers itself. The best action movies -- The Road Warrior, Raiders of the Lost Ark, The Terminator, Casino Royale, et al. -- show an intrinsic understanding of the holy trinity of space, time and movement. Despite having immeasurably bigger budgets and special-effects to play with (or possibly because of them), Michael Bay is oblivious or indifferent to these things. He's forged a signature style of arrogant ineptitude that gives hackery a bad name. (The original hacks of Hollywood actually knew what they were doing.) Malick's method is trickier to ascertain. Would The Tree of Life be more effective if it actually had standard scenes, rather than a series of fragments of scenes? Could the film's central narrative stand without the avant-garde passages that surround it?

That version of The Tree of Life might have made a good movie too. It wouldn't have been a Terrence Malick movie, however. I realize that runs counter to how I usually roll -- making fun of auteur worshippers -- but so be it. Malick's film has plenty of other qualities that normally make me retch: the aforementioned spiritual overtones, Freudian psychology, a mother-figure who is Pure and True, lots of oohing and ahhing over babies. The reason they didn't, I think, is because I love to see an artist caught up in his own grand passions; oftentimes they catch me up in them too. "This is Malick's big one," wrote David Edelstein, "his long-gestating answer to 2001 and Paradise Lost...." Yet what's astonishing is Malick seems to have grown less cynical as he's gotten older, a virtue that informs his responses to Kubrick, of course, but also to the all-grown-up Spielberg, who can no longer make the movies he once made better than anyone else nor the adult fare that real adult filmmakers still make better than he does. Malick's dinosaurs don't act like actual dinosaurs did; the compassion one shows another seems to be a riposte aimed at the jaded mechanics in parts of Jurassic Park and the entirety of The Lost World.
It's also a credit to a director when a dinosaur set-piece isn't even the nuttiest scene in his movie. Behind the narrative innovation, Malick usually comes across as relatively square, so it's a thrill to see him release his energies into confounding images: I still can't get out of my mind the giddy sight of Mother at one point inexplicably floating through the air, like Wendy without help from Peter Pan. Nor will I forget young Jack stealing a woman's dress, only to throw it in a river as a result of sexual panic. Or contemplate killing his father by dropping a car on his head. Malick isn't blind to the darker impulses of human nature, which is what makes his lingering sense of wonder all the more wonderful. On Facebook, Ryan Kelly noted that Malick celebrates "the birth of our planet as much as the birth of an infant child." And he hears the voices of his characters, talking constantly to themselves, leaving you with the suggestion that the universe, however preoccupied with its own concerns, is in its own way listening too.
Posted by Craig at 5:00 PM 11 comments: