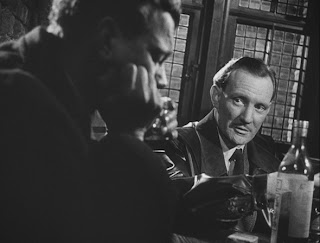 1)      The classic movie moment everyone loves except me is: "Show Me the Money!" from Jerry Maguire. It always makes me cringe. I usually take the opposite stance on this issue, however: I'm frequently surprised by the number of people who pooh-pooh the most memorable scenes from movies or TV shows. I always want to ask how they think the film or episode would play without them.
2)      Favorite line of dialogue from a film noir: "You were born to be murdered." - Trevor Howard to Joseph Cotten in The Third Man. It's a line that perfectly encapsulates the entire genre (even though, of course, he isn't killed).
3)      Second favorite Hal Ashby film: The Last Detail.
4)      Describe the moment when you first realized movies were directed as opposed to simply pieced together anonymously. * Around the time I started watching Siskel & Ebert, 10-11 years old. Spielberg was likely the first director I was conscious of - so Raiders or E.T., I would guess.
5)      Favorite film book. Mark Harris's phenomenal Pictures at a Revolution.
6)      Diana Sands or Vonetta McGee? Who?
7)      Most egregious gap in your viewing of films made in the past 10 years. I've avoided Harmony Korine like the plague so far, but Spring Breakers may finally change that.
8)      Favorite line of dialogue from a comedy. "You slut." - Bill Murray, Tootsie.
9)      Second favorite Lloyd Bacon film. Who?
10)   Richard Burton or Roger Livesey? Burton easily over Whatshisface.
11)   Is there a movie you staunchly refuse to consider seeing? If so, why? Anything by Vincent Gallo. Others will undoubtedly tell me I'm missing out. I say there's more than enough narcissistic bullshit in real life, and much more adeptly staged and focused.
12)   Favorite filmmaker collaboration. Kurosawa and Mifune.
13)   Most recently viewed movie on DVD/Blu-ray/theatrical? DVD: Lockout. Blu-Ray: Paris, Texas. Theatrical: Thief of Bagdad (the one with Douglas Fairbanks, Jr).
14)   Favorite line of dialogue from a horror movie: "Take me!" - Father Karras's ultimate sacrifice in The Exorcist.
15)   Second favorite Oliver Stone film: W., believe it or not. I think it's a brilliant black comedy.
16)   Eva Mendes or Raquel Welch? The "sexy duds" category. I'll pick Raquel.
17)   Favorite religious satire: Life of Brian by default. Slim pickings.
18)   Best Internet movie argument? (question contributed by Tom Block) Matthias Stork's "Chaos Cinema." He went on to confuse his own ideas the more he tried to explain them (and became needlessly apologetic to his straw-man critics), but his original video essay is still a game-changer.
19)   Most pointless Internet movie argument? (question contributed by Tom Block) Anything concocted by the Neo-Auteurists, such as insisting the reliably shitty Paul W.S. Anderson is a major filmmaker or, worse, a better filmmaker than Paul Thomas Anderson. (hat-tip Steven Santos)
20)   Charles McGraw or Robert Ryan? I don't need to know who McGraw is to say Ryan.
21)   Favorite line of dialogue from a western: "Trust you? Why should I trust a man who wears both a belt and suspenders? You don't even trust your own pants." - Henry Fonda in Once Upon a Time in the West (although the line was partly co-opted from Ace in the Hole).
22)   Second favorite Roy Del Ruth film: Dunno.
23)   Relatively unknown film or filmmaker you’d most eagerly proselytize for: I've already proselytized for The Big Year, an uncommonly gentle comedy that finds truth and beauty in conventionality.
24)   Ewan McGregor or Gerard Butler? McGregor, a good actor, in a walk.
25)   Is there such a thing as a perfect movie? Not often, but yes. I do grow weary of critics proclaiming every movie they see from their favorite director as a masterpiece. After a while the word starts losing its meaning.
26)   Favorite movie location you’ve most recently had the occasion to actually visit * The Hotel Coronado in San Diego, the setting for the second half of Some Like It Hot.
27)   Second favorite Delmer Daves film: ?
28)   Name the one DVD commentary you wish you could hear that, for whatever reason, doesn't actually exist * The riotous James Ellroy and Eddie Muller (Crime Wave) should do commentaries for every classic film noir ever made.
29)   Gloria Grahame or Marie Windsor? GG.
30)   Name a filmmaker who never really lived up to the potential suggested by their early acclaim or success: Kevin Smith, who decided a long time ago he'd rather be a slacker poseur than build on the success of Clerks and the creative promise of Chasing Amy.
31)   Is there a movie-based disagreement serious enough that it might cause you to reevaluate the  basis of a romantic relationship or a friendship? * Both Jason Bellamy and I have recounted my anecdote about Last of the Mohicans.
Posted by Craig at 3:24 PM No comments:

House Arrests (This Is Not a Film and Killer Joe) 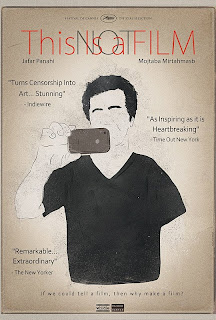 Over the last few weeks have come two articles of note - Complex Pop Culture's "25 Best Movie Critics of All Time," followed by Cineaste Magazine's profile of a handful of the 35-and-youngers, "Film Criticism: The Next Generation." For all the usual fallacies associated with list-making (Dana Stevens on, Kent Jones off - riiiiiight), the former is a surprisingly decent overview, if typically Americentric and short-term-memoried. The latter is a commendable attempt to advance the notion that the future of movie criticism is bright, a thesis disputed by at least a couple of the "best." For our purposes here, I'm less interested in what the established Eeyores think about the whippersnappers than in what it would take for an up-and-comer to make his or her way into the canon.

To paint in broad strokes, I think that many twentysomething critics are gifted with strong voices without having a whole lot to say. Oftentimes, on sites that employ them, they blend together as the same voice, bereft of any individual distinctions; their prose isn't instantly recognizable the way Fernando Croce's is, for example. Far from tentative, their biggest flaw is supreme confidence masking insecurity: They come across like grad students straining to come up with an "original" point-of-view on topics that have been thoroughly excavated. Consequently, I find hard to take seriously any "bold" statement they make. (That every movie is regarded as either a towering masterpiece or a crime against humanity doesn't help.) You really think O.C. and Stiggs is better than Nashville? Then show your readership something beyond a string of haughty declarative sentences. Show that you are searching and grappling with the film, with yourself, with the connection between the two. These are the qualities that have made many of the greatest critics: look at the Top-25 list again. 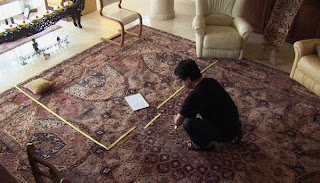 These are the qualities of all great artists, as Jafar Panahi demonstrates in This is Not a Film (2011). I'm going to bypass what everybody already knows about Panahi's house-arrest iPhone documentary (cake-smuggling, a pet iguana named Igi) and sidestep what I don't know about his body of work (i.e., everything) and instead focus on what resonated with me the most - the film's concluding movement. After approximately an hour of Panahi and his co-director Mojtaba Mirtahmasb's detailing of the tension between Panahi's physical confinement and intellectual freedom, the pair are interrupted, as Mirtahmasb is about to leave, by a garbage collector, who takes note of Mirtahmasb's sophisticated digital camera left on Panahi's kitchen table. Panahi takes the camera and follows out of his apartment and onto the elevator the garbage collector as he makes his rounds through the building. Collector and filmmaker chat for several minutes as the elevator goes down, culminating with Panahi following him outside while the banned "Fireworks Wednesday" celebration explodes in the sky around them.

What I love about this sequence is not merely not knowing whether it's spontaneous or staged or both, but that Panahi shows it doesn't matter. While other documentary filmmakers - from Errol Morris to Alex Gibney to Michael Moore to Werner Herzog - may at times questionably mix fact with fiction, Panahi makes the creative impulse This Is Not a Film's true subject. By finally finding a compelling "character" (other than himself), even introducing him via what is essentially a Meet-Cute, does the director become briefly yet exhilaratingly free. 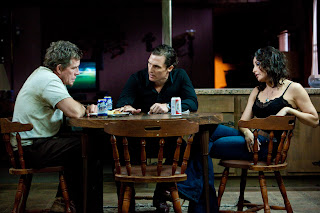 If they haven't already, the Neo-Auteurists - i.e., the aforementioned upstart critics who concur with the pantheon of Great Filmmakers while claiming that their justifiably forgotten works are better than the highly regarded ones (John Ford's Cheyenne Autumn is greater than The Searchers, Orson Welles's wine commercial is superior to Citizen Kane) - will sooner or later burst forth to declare that William Friedkin's Killer Joe (2012) is a more significant achievement than his 1970s watersheds The French Connection and The Exorcist. It isn't, not by a long shot. But it's a buoyantly sleazy noir-comedy made by a filmmaker arguably more resourceful now than he was then. Give the 77-year-old Friedkin credit for staying power: working again from a script by playwright Tracy Letts, this director, often reprimanded by Pauline Kael for blunt docudrama brutalism, has reimagined his style without going soft. He doesn't "open up" Killer Joe so much as supply it with a vibrant atmosphere. The movie breathes, even as it's exhaling toxic fumes.

A thoroughly disreputable film that made me laugh a lot (Kael may have laughed, too: What she wrote about Repo Man - "Sometimes a movie without any redeeming social value can make you feel good" - applies equally here), Killer Joe shows perverse affection toward its venal Texas lowlifes: they're alive in a way the zombies of Soderbergh's Bubble or the woebegones of Kelly Reichardt's movies are not. (How else could Emile Hirsch give his most vivid and weirdly likeable performance ever?) It's also more deeply entrenched in classic noir than other movies that make no more than feints and nods toward the genre. The title character's murderous predilections are in tandem with kinky sexual fetishes from which neither Friedkin nor Letts nor Matthew McConaughey (another of his recent career-redefining performances) shy away. Meticulous in planning the details of a homicide (in this case the mother/wife of, respectively, Hirsch and Thomas Haden Church), yet impulsive in his lust (in this case their jailbait sister/daughter, who becomes his "retainer" for the killing), Joe is a control freak who loses control of the situation only to take extreme measures to gain it back. His cool desperation culminates in a dinner-table set-piece that's like the demented mirror-image of the breakfast-table climax in Moonstruck. Killer Joe turns into a bloody comedy-of-marriage - imagine the climax of Much Ado About Nothing crossed with Julius Caesar - a revelation perhaps obscured by the appearance of a chicken drumstick. This key prop, and what it is used for, has become understandably controversial. Yet it's like Chekhov said: If you introduce a drumstick by the third act, sooner or later it's gotta go off.