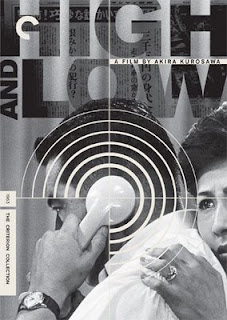 From the Dept. of Coincidences: About two weeks ago I had just exchanged correspondence with a friend about my favorite Akira Kurosawa film, the staggering High and Low (1963), when along came Peter Labuza's "Dial K for Kurosawa," a video essay on the very movie at Press Play. Labuza posits that the legendary Japanese filmmaker's approach to the subject - which may be loosely described as a kidnapping thriller - is similar in style to the director of Vertigo, North by Northwest, and Rear Window. The video segment of Labuza's piece deftly emphasizes visual echoes between High and Low and Hitchcock's body of work while the written portion expands on these notions: "Like Hitchcock, Kurosawa explores the roles of duality, ubiquitous guilt, and the incapacity to understand evil in a frightening and ultimately despairing fashion." At another point Labuza adds, "Kurosawa never mentioned the influence of Hitchcock in any of his interviews, but I can’t imagine watching this modern day crime story and not think of the master of suspense."

That I've seen High and Low five or six times without thinking of Hitchcock once may simply be a failure of my own imagination. But I want to be clear that I find "Dial K for Kurosawa" a lively, thoughtful work of criticism: free of insecure haughtiness or aggressive irrelevance, Labuza refreshingly puts his topic at the center (instead of himself) and considers every angle with depth and focus. If I ultimately don't buy the premise, it's still the kind of piece that allows you enough headspace to formulate and challenge your own ideas. For example, the coup de grace of Labuza's essay reveals that Ed McBain, the author of the novel King's Ransom, on which High and Low is based, was the nom de plume of Evan Hunter, who also wrote the screenplay for Hitchcock's The Birds. Yet this ending actually reads like a possible starting point for the entire essay -  Kurosawa and Hitchcock each adapted a movie from the same author; I wonder what they have in common? - hence the citing of "Doubles" (Strangers on a Train), "Staircases" (Psycho), "MacGuffins" (Notorious), and "Voyeurism" (Rear Window). Entertainingly as these parallels are conveyed, I can't help but wonder if any director (James Mangold, off the top of my head) could be used to draw a comparable analogy. For me, the real question between Hitchcock and Kurosawa has nothing to do with common denominators. It's rather: How do two great filmmakers use similar genre conventions in entirely different ways?

For those who haven't seen it (and, succinctly, for those who have), High and Low stars Toshiro Mifune as Kingo Gondo, a high-ranking shoe company executive whose corporate takeover scheme is thwarted from an unlikely source - the abduction of his chauffeur's son. That Gondo's progeny was the intended target doesn't faze the as yet unseen kidnapper, who shakes down Gondo for a couple million anyway. Following a bullet-train rendezvous where child and money are exchanged - albeit not in the manner you would expect - the film turns from Gondo to the team of investigators assigned to the case and to the criminal himself, a disgruntled medical intern named Takeuchi (Tsutomu Yamazaki). Although there are strong suggestions of duality between Gondo and Takeuchi, particularly a striking image in the final scene (highlighted by Labuza) where their reflections are layered atop each other's faces, the link isn't nearly as explicit as the one between Guy and Bruno in Strangers on a Train (or, for that matter, between cop and crook in Kurosawa's Stray Dog). Stephen Prince, in his patently superb DVD commentary, believes that Kurosawa isn't equivocating Gondo's "crimes" with Takeuchi's, but rather illustrating Dostoevsky's belief (I'm paraphrasing) that the road to goodness lies in recognizing yourself in another person - even when that "other" is separated by prison bars.

Another of Prince's key observations underlines what strikes me as the film's true dichotomy - the individual vs. the collective. Kurosawa explores this theme via a radical transition in the narrative: the first half of the film focuses on Gondo in his swanky high-rise apartment; the second half follows a teeming ensemble of Yokohama investigators as they cover what feels like every square inch of the city in tracking down the kidnapper. In the apartment, Gondo's strength and stature is gradually undermined by the increasingly untenable position he finds himself in, which Kurosawa illustrates by surrounding him in the frame with as many other characters as possible. (Prince mentions not Hitchcock's Rope but Sidney Lumet's Twelve Angry Men as the primary influence here.) In the city, High and Low leaves Gondo offscreen for long stretches while the police force puts together the disparate pieces of evidence that eventually lead them to Takeuchi. Although the movie features many familiar faces from Kurosawa's body of work (including Tatsuya Nakadai, Isao Kimura, Takeshi Kato, and Takashi Shimura), it's astonishing how their formidable personalities are suppressed into a collectively functioning unit (as opposed to Seven Samurai, where each member of the group retains his distinct individuality). Prince notes that while Kurosawa was no longer the practicing Marxist of his youth, High and Low shows "that he never abandoned (Marxism) entirely."

It's fun to speculate what Hitchcock would have made of High and Low - microfilm hidden in a pair of high-heeled shoes? - yet any speculations serve to reveal more differences than similarities with Kurosawa. Hitchcock glided over the details of his plots quickly (perhaps because they often had holes in them); Kurosawa lingers on them in High and Low, to where the process of the investigation itself (more than the actual chase, which Hitchcock was inclined to cut to) is what becomes thrilling. Moreover, Hitchcock fetishized the visuals in his movies; Kurosawa - at least in High and Low - does not. Hitchcock's physical landscapes were frequently manifestations of his characters' psychological states. Kurosawa made films that did that too (most obviously Dreams), but what I love about High and Low, for all its style (e.g., the pink smoke that appears suddenly out of the black-and-white imagery), is how strongly tethered it is to the real world. You don't have to hear Stephen Prince point out Kurosawa's concerns with the economic disparity (following the 1950s postwar boom) in Japan, or lax punishments for kidnapping in his country, to see the director's preoccupation with then-contemporary issues. Nor would Hitchcock have likely used something as mundane as air-conditioning (unless it were a A/C unit containing microfilm) to indicate the festering class distinctions between Yokohoma's "Heaven and Hell" - High and Low's original title in Japan. I'm not suggesting Hitchcock wasn't interested in social issues or class differences, just that he was good at keeping his feelings about such things offscreen and to himself.

Kurosawa's wide-ranging style, near-cinema-verite one moment, expressionist the next - becoming most surreal in the famous "Dope Alley" sequence (and his intermittent, strategic use of shakycam and lens flares ought to shame proponents of nonstop "Chaos Cinema") - serves as a visual document for early-1960s Japan in ways similar to how Taxi Driver would capture New York City in the mid-1970s. The style of "Movie Brats" of the latter era - Scorsese, Coppola, Spielberg, et al - today seems almost as quaint as that of Kurosawa and Hitchcock were then. The time where filmmakers made movies about the real world, even while incorporating cinematic homages to their predecessors, seems to have been supplanted by filmmakers who make movies only about other movies. Perhaps as a conditioned response to this, much current film criticism seems uninterested in the relationship between cinema and the everyday - or even other fields of creativity, like painting or theater (at the most the occasional book, preferably comic), the way Farber or Agee or Kael did - and instead tries to forge connections between one filmmaker and another. "Dial K for Kurosawa" is one of the better examples of this - again, let me emphasize, I enjoyed the piece. And it's entirely possible that Kurosawa was influenced by Hitchcock; who wasn't? I just see more fitting subjects for this kind of pure-celluloid comparison than a film as resolutely earthbound as High and Low.