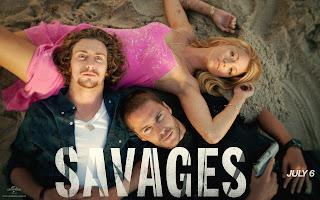 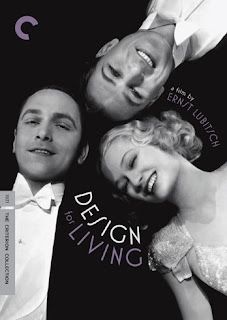 Now I need to see Design for Living. I like the Lubitsch films I'e seen but had never heard of this one when I saw that tweet quipping Stone had remade it, so I wasn't sure if the tweet was a praise or a criticism of Savages. Judging by your review of it, though, Stone might be flattered by the comparison.

Absolutely 100% in agreement with you that Stone is a better humorist/writer of female roles than critics give him credit for. Thankfully, nobody seems to be trying to take Stone to task over this in regards to Savages, although it appears as though the only thing everybody wants to do is complain about the movie's ending. I haven't seen this much anger over an ending since No Country, except whereas that movie got splendid reviews, Savages got pretty lukewarm ones. Is it poissible this movie will be better appreciated on DVD? Or are critics and audiences just going to despise Stone forever and ever!?

I think the "Design" tweet was a criticism, but you're right, Stone probably would be flattered by it. It definitely was for me the most interesting part of the movie: at least in theory; onscreen, I found the lead trio (Lively especially) rather vacuous. Frankly, I think "Savages" is going to look even more dopey in a few years, but I could be wrong.

Interesting comparison/linkage. My gut tells me that SAVAGES isn't a good movie (sorry, Adam), but you've piqued my curiosity, certainly.

Damn right Porlock! Funny thing I've not seen Savages but am working on a post about cinema's coolest threesomes and I just stumbled on this post via a friend's blog's blogroll.

I admire your honesty - "I laughed knowingly" before seeing Design for Living. We need more of that in this blogville Porlock! keep up the good work, let us link in comradeship. (acidemic.blogspot.com)

Apologies for the embarrassingly late reply, Erich, but thank you for your comment. I've enjoyed your blog as well.