Flocked Together (The Big Year) 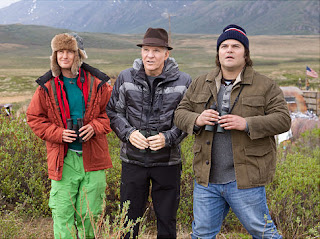 You may faintly recall the previews for The Big Year (2011), the Steve Martin/Jack Black/Owen Wilson birding flick that came out about a year ago - "dumped" is more like it - on American theater screens. With more than a whiff of desperation, the trailers emphasized the comic stylings of the stars and featured a couple of scenes (fake-looking birds mock-attacking a shrieking woman, Martin and Black doing a jig) that made the movie look like a strenuously wacky farce. (It may have included James Brown's "I Feel Good," I can't remember.) Like everyone else I gave The Big Year a wide berth, finally catching it recently as a what-the-hell Netflix pick, and I'm here to report it's a real find. It's a lyrically paced, beautifully shot, meditative comedy about three lonely men who become friends or, at least, respected rivals over a shared obsession. No wonder Hollywood didn't know what to do with it.

What Hollywood did do right (before the movie's release) was give $40 million to a talented director to shoot a thoughtful script about an unconventional subject with a familiar-faced cast on one gorgeous location after another. (Canada doubles convincingly - sometimes for U.S. locales, sometimes for itself - for many of the trans-American regions.) Directed by David Frankel (The Devil Wears Prada, Hope Springs) and written by Bill Murray's Quick Change co-writer and -director Howard Franklin (adapting the 2004 book by Mark Obmascik), The Big Year chronicles an annual competition among devoted birders to see and identify the most species of birds. The rules are...none. The winner gets...nothing. It's all done on an honor system (photographs are often taken, but unnecessary), with prestige accorded among only the inner circle.

While duos are a staple of most screenplays, from buddy movies to romantic comedies, I often find more interesting rare films that feature a lead trio. (I know romcoms often feature "romantic triangles" - and, who can forget, Harry Potter - but the deck is usually stacked against one of the characters.) Something about triangulation lends itself unexpectedly well to narratives ranging from L.A. Confidential to The Big Year: we get to see the characters as individuals and in pairs; the scenes stay fresh and varied and inform one another. In The Big Year, Brad Harris (Black) is the underdog birder, a low-level nuclear power-plant employee who pulls together his meager savings for a shot at the world record. Stu Preissler (Martin) is a wealthy entrepreneur whose efforts to retire (and have a "big year") are thwarted by turmoil within the company he founded. Kenny Bostick (Wilson) is the defending record-holder who thrives on competition, to the chagrin of his wife back home. As Brad, Stu, and Bostick (referred to with derisive irritation by his last name, a la "Newman" on Seinfeld) trek from one end of the country to the other - a middle passage on frigid Attu Island is a highlight - we meet their fellow birders (including Rashida Jones, Jim Parsons, Anjelica Huston, Tim Blake Nelson, and TV weatherman Al Roker) amid pauses with their families (Dianne Wiest and Brian Dennehy as Brad's parents, JoBeth Williams and Rosamund Pike as, respectively, Stu's and Bostick's wives).

The Big Year does a nice job grounding the principals in their disparate worlds. (Dennehy, in particular, puts an expert spin on the so-very-tired disapproving father routine that eluded good actors like Chris Cooper in October Sky and Robert Patrick in Walk the Line.) It's tough to make integrity and decency appealing onscreen - or at least that's what Hollywood tells us, as an excuse to never try it - yet The Big Year is most compelling when it envelopes us in the (mostly) world of birding and the silence and patience it demands and accords. Brad and Stu's friendship is touchingly developed, and brings out Steve Martin's best work in eons. (Martin has always been more of a soloist than a team player, yet he connects with Black, even when the latter a few times oversells the wide-eyed self-pity.) As Bostick, Wilson reminds us of his ability to play unlikeable and yet remain engaging in spite of it. The movie teases us with suggestions that Bostick is a cheater, yet when it's revealed that he plays by the rules, the character becomes more interesting and earns a grudging respect.

Even tougher to pull off, The Big Year makes the world that the trio share look - for all its obstacles - alluring. The problem with obsessives is they frequently mistake telling you all about themselves for actually sharing why they love what they love, and in convincing you why you should too. (To put it another way, their emotions about a particular subject seem to matter more to them than the subject itself.) The Big Year isn't a great film, but it's precisely the kind of good one that recalls enough of the pleasures of what used to be known as conventional narrative filmmaking to seem almost quaint. (It also continues the curious, time-honored tradition of experts enjoying a movie about their specialty that critics and mainstream audiences ignore -- see also medieval historians on The Thirteenth Warrior.) Frankel and Franklin keep the narcissistic yammering to a minimum. Wisely, instead, they invite us into their movie, teach us the terrain and the lingo ("fallout" is given an amusing connotation), show how different people can forge a common bond (what else besides birding could bring James Wolcott and Jonathan Franzen together?), and give us reason to stay. 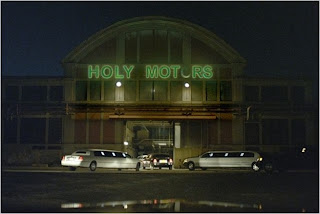 Here we go again: Leos Carax's Holy Motors (2012), like The Artist, Hugo, and Argo over the past year, is a "love letter to movies." It's about the power of cinema, you see, a dominion the medium's most dogmatic (read: insecure) supporters grow ever more insistent is indomitable and all-encompassing, a claim nearly as tedious and tunnel-visioned as the rash of preliminary obits they're quick to lash out against. They seem to not consider that some of their most revered auteurs made films that skeptically deconstructed movies (Welles, Altman, De Palma), or the possibility that Carax has crafted an epitaph as well.

The plot of Holy Motors is already famously indescribable - the closest approximation being it's about a day in the life of a mysterious individual, Monsieur Oscar (Denis Lavant), who assumes the identity of various characters (father, beggar, hit-man, dwarf, etc.), as he's driven around Paris in a white stretch-limo. Yet if the story is hard to classify the film's mood-trajectory feels familiar, largely comic for the first half before veering into melancholy and tragedy in the second. Oscar has nine "appointments" throughout the day (I assume he accomplishes all of them, I lost count), and those that draw the biggest laughs and provide the most energy occur in the opening hour: a dwarf kidnaps a model (Eva Mendes) during a fashion shoot; a motion-capture sex scene, with Oscar donning an Andy Serkis-like suit; an enthralling "Entr'acte featuring Oscar leading a group of accordion players around in an Aaron Sorkin-like circle. The tone shifts, however, during a quiet passage where Oscar portrays a father disappointed that he captures his daughter in a lie; then progressively darkens, without really deepening, through a string of scenes where Oscar is "killed," as well as a wistful musical interlude featuring Kylie Minogue.

While I think Carax's film is too insular and calculatedly bizarre to earn emotional resonance (although Lavant's scenes with Edith Scob, as his devoted chauffeur, come close), it's fair to interpret - via the later passages, the physical weariness of his lead actor, the expressions of longing for a past where the cameras weren't small - that he sees cinema less as a vital, indestructible force than in the throes of a death-grip. Or, perhaps, like Paul Schrader, he sees cinema as not dying but changing - like Oscar, morphing into a different form. (Holy Motors was shot entirely on digital; and, sorry again, film purists, but the 2K DCP version I saw looked gorgeous.) The climax - or, rather, one of them - where Oscar plays papa to a house of chimps, could be seen to symbolize the medium in an evolutionary state.

What saves Holy Motors for me isn't any semblance of depth but that its best parts embody mischief. The film has an ornery spirit and a sense of a nutty fun, most notably in that dwarf sequence, when Lavant runs through a cemetery where the tombstones feature website URLs, and the director/photographer of the fashion shoot seems to be there for a pointed jab at David Lynch's worldview. "Beauty! Beauty! Beauty! Beauty!" he shouts excitedly while photographing Mendes; then, when he spots Lavant's demented leprechaun: "Weird! Weird! Weird! Weird!" As with all of Lynch's films, critics are showing off their collective imagination by calling Carax's "dreamlike" (described as such in at least 14 of 26 reviews linked by Metacritic). But Holy Motors is nothing like a dream. It feels utterly, completely a movie, in all its glories and limitations.