To Those Who Serve (The Master) 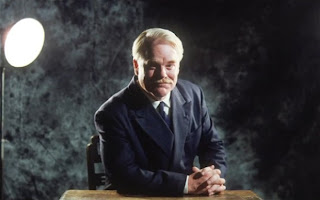 At the end of The Master, I felt something like Ralphie in A Christmas Story when he discovers that the secret message unscrambled by his decoder ring contains a mundane if shameless plug: "Be Sure To Drink Your Ovaltine." Clearly my own code-cracker is on the fritz. Countless others, even those unsure if they liked Paul Thomas Anderson's latest masterwork, have taken on the diligence of Biblical scholars analyzing the Dead Sea Scrolls, uncovering an endless array of beguiling themes, hidden subtexts, and deep meanings. Many have seen the movie more than once, scrutinizing each frame far more seriously than Ralphie took his own comparably simple task. (What kind of Ovaltine? he failed to consider. Why the word "Sure" instead of "Certain?" How should it be drunk? With a spoon? Table or tea? In a cup? Paper or glass?) We will never know the true agenda of A Christmas Story. Conversely, I think too much is being made of The Master, a movie that is complicated, yes, without being particularly interesting or illuminating. I don't think it's a case of a filmmaker employing flash to conceal the emptiness of his story. It's the work of one unnecessarily getting in the way of a story that could -- and should -- be more involving than it is.

For me, at least, Anderson has toed this line before without quite stumbling over it. Boogie Nights, Magnolia, Punch-Drunk Love, and There Will Be Blood all won my admiration after trying my patience. (The general mainstream audience reaction has been less favorable: I felt palpable hostility and witnessed walkouts in the theater at all four of those films, especially irate Sandler fans on opening-day for Punch-Drunk.) Anderson likes the kind of Big Acting that features a lotta hootin' and hollerin', and his directorial style - hyped-up even when it's pared down - accentuates the histrionics of the performances and vice-versa. "(T)he courting of danger is what makes his films so exciting," Kent Jones has noted, and he's right. The Master shows the director as fearless as ever, and every inch as bizarre. Fleeing a pack of angry migrant workers, Freddie Quell (Joaquin Phoenix) runs with the same loose-limbed huffing and puffing as Barry Egan in Punch-Drunk Love. Later, Freddie is awakened in a movie theater by an usher with a telephone: it's a call from Lancaster Dodd (Phillip Seymour Hoffman) urging Freddie to come to England, saying he can't wait to see him; in the very next scene, Freddie travels across the pond to see Dodd, who greets him with, in essence, "What are you doing here? I don't want to see you." Then Dodd serenades Freddie with a stirring rendition of "Slow Boat to China," because that's how they in England say goodbye. (To paraphrase Indiana Jones, I preferred the Austrian version.) At this point in his career it is glaringly apparent that Paul Thomas Anderson is an immensely talented filmmaker. He also is one strange fucker.

The Master, however, is the first time I've found his talent and his strangeness at cross-purposes. The aforementioned phone call scene, for example, could very well be a dream, or the subsequent scene in England could be one, or both. Somewhere a team of specialists is hard at work on the answer. But in this instance and plenty of others in the movie, I'm not convinced it matters. A Mulholland Dr.-type dream logic works for Mulholland Dr., and it might have worked for a film about a religious cult that genuinely wanted to examine the effects of cultism. Anderson showed empathy toward John C. Reilly's gently devout police officer in Magnolia but he's been overtly cynical about spirituality ever since, first with Paul Dano's jackleg preacher in There Will Be Blood and now Hoffman's more polished, imposing Lancaster Dodd. Plainview towered over Eli in the previous film - their conflict, although compelling, was never a fair fight - but Dodd and Freddie tangle on a more level playing field. Or at least they should be, except that the characters, even within the same scenes, don't seem to be in the same movie. Hoffman and Phoenix certainly aren't acting in the same one.

But then Joaquin Phoenix has never worked for me, other than as Johnny Cash, where he had to walk the line (heh) and couldn't veer too far astray in the portrait of an American icon. I've often griped that actors receive too much praise when they play famous people, that it's harder to create an original character out of thin air (even if you base that character to an extent on an actual person, e.g., Daniel Day-Lewis channeling John Huston in There Will Be Blood). Why then can I not stand Phoenix's performance in The Master? As with Nicolas Cage nowadays, I'm admittedly predisposed to disliking him going into a movie, a still photo from a film enough to make me itch. 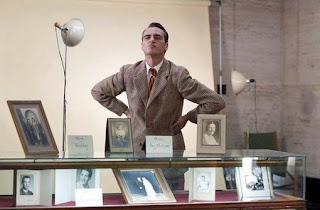 Yet I'd hoped that Anderson, like Robert Altman, could transform a familiar face, coax him into showing us something new. (Even when his actors go overboard, there are usually quieter moments - Reilly kissing Melora Waters in Magnolia, the orphaned baby tugging at Plainview's mustache in There Will Be Blood - to offset the melodrama.) As Freddie, Phoenix certainly shows us something more, every physical tic registering like a high-richter 'Frisco quake. Even non-fans of the movie have been wowed by this more-ness, enough to make me wonder: Why? More precisely, what is it about this performance that believably conveys an emotionally scarred war veteran who falls in with a fringe religion? After an initial, informal "processing" session that leaves a blissful smile on his face (one of the movie's best scenes), Freddie exhibits only a jaded attitude toward Dodd's faith. That he's also quick to pounce on anybody else who professes their own skepticism is the kind of contradiction that happens in real life all the time, and would have been fascinating for the movie to explore. Anderson, though, is content to leave it unanswered. Pure hypocrisy may be a satisfying interpretation for some, but I think it's a missed opportunity.

Even with Dodd - a more realized character, played by a better actor - there is either an inability or a lack of curiosity to go deeper into the character's core beliefs. A key scene where a guest questions Dodd's flim-flammery (and is subsequently beaten to a pulp by Freddie) devolves into an Actorly Moment where Hoffman sweats and hollers and calls the poor guy a pig fuck. Another scene features a follower calling Dodd's new book terrible (he too gets pummeled for his sins). Why then, other than intimidation, and an appealing openness to laughter (as long as it's not directed at him), do people follow this man? Unlike Robert Duvall's The Apostle, Anderson misses the point of authentic religious extremism, which is not that leaders and followers are hypocritical about their faith but that they're not. The myriad contradictions of their belief system - peace and violence, love and hate - all derive from the same place. It's well within Anderson's right to offer his own interpretation, but I think it's at the expense of his own narrative. As Pauline Kael once opined, real fanatics are much scarier.

It's entirely possible that I'm focusing on the wrong things. "With a movie," a dogmatic auteurist tweeted several months ago, "you could talk about the plot, or the characters, or whether the performances are believable or not. Or you can talk about The Film." Until then I never realized that you could approach a film without noticing anything that's actually in it - a viewpoint, as others have observed, with mysto-spiritual undertones. Only up to a point, however. As opposed to claims for Xenu, we have independent evidence that there exist entities called movie directors, and that one of them is Paul Thomas Anderson. Whether or not The Master is a great film invites a more qualitative response, but I'm skeptical of a line of argument that the movie is not aimless but rather, in sum, "about aimlessness." I used to find this sort of reasoning seductive myself (e.g., There Will Be Blood unravels in its final third to parallel the unraveling of its main character), but lately I'm finding it too easy, too convenient to say that a movie is reflecting its substance deliberately through its style. So I'm afraid a heretic is in your midst. I need more proof. I don't have enough faith.