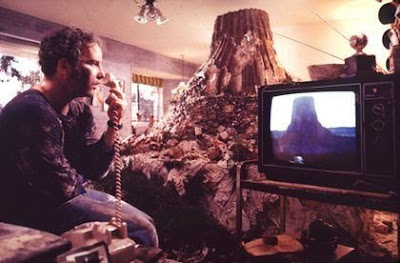 Close Encounters of the Third Kind is a movie without a villain. Sure, you could argue the aliens, the military, or Teri Garr fit the bill, but you won't hear much of that from me. Some of their actions are certainly questionable, but as Jean Renoir would say, they all have their reasons, and everyone is reconciled at the soaring Devil's Tower Philharmonic climax (except my beloved Teri, who gets the shaft here as she did in Tootsie). What's amazing is how Spielberg makes the movie compelling anyway, sometimes by setting up temporary threats (aliens), obstacles (military), and skeptics (Garr) in the path of Roy Neary - played by a rarely-better Richard Dreyfuss - yet often through the structure of the film itself.

The parallel narratives of Close Encounters - Roy's quest to discover what the UFO encounter and his subsequent visions mean; the Franco-American scientific initiative, led by Francois Truffaut's Lacombe and Bob Balaban's Laughlin, to hold a summit with the alien visitors - dovetail beautifully, showcasing Spielberg's ability to convey the magical in the commonplace and the human in the extraordinary. I don't know how much of Paul Schrader's original concept Spielberg kept in his screenplay, but the growing possession of Roy by his visions anticipates Jesus accosted by the Holy Spirit in the Schrader-scripted Last Temptation of Christ. It's certainly in keeping with the religiosity of Schrader's own films (he has said he wanted to make Close Encounters a metaphor for the story of St. Paul), albeit with more welcome humor that is likely a product of Spielberg's sensibility.

Funny as it is to see Dreyfuss playing with his mashed potatoes and later tearing up his house, it's deeply unsettling too (more so than the horror-movie scare tactics Spielberg employs in the kidnapping of Melinda Dillon's son). Spielberg uses a dual perspective: We identify with Roy's confusion and obsession, yet we also understand why his wife and children would be concerned, upset, and want to flee. Fear is also the military's emotion of choice to drive the inhabitants of Wyoming out of the rendezvous area: one of my favorite scenes is the brainstorming session of ideas for what will scare the citizenry the most, followed by the incongruously menacing image of Higgly-Piggly and Baskin-Robbins trucks driving down the interstate. In Close Encounters, the overcoming of fear occurs through communication. It's touching to hear Truffaut struggle with English (a language he never mastered) and Balaban accommodating him in his comfort zone; it's transcendent to listen to the evolution of the musical cue that originates with the natives in Africa and mastered by the team of Lacombe and Laughlin and played by Dillon's son and ultimately bridges the communication gap between the extra-terrestrials and humanity. Overcoming fear is a key component of the film; when Roy removes his gas mask and calls the military on their bluff, it's a great moment because he's doing it as an ordinary man rather than a hero - which makes his actions all the more heroic.

I watched Close Encounters last week for the first time in years, picking up the impressive Blu-Ray set with all three versions of the film from which to choose (the1977 Theatrical Release, the misconceived 1980 Special Edition, and the mea-culpa 1998 Director's Cut). Although the movie has aged well, it reveals its age in interesting ways. One is how the teamwork between the French and Americans (an even less likely peaceful union today than people and aliens) personifies the 70s Hollywood movie-brats' tip of their hat to the French New Wave. Until the overlong climax, Close Encounters is as propulsive and tightly-edited as the best of Truffaut's or Godard's own films, remarkably free of the speechifying and unnecessary drawing out of events that has plagued Spielberg's later work. (Lincoln...I'm just dreading it.) There's a interminable sequence in War Horse, where we see a letter being written by one character, then the letter being delivered to another character, then the other character being told that he has a letter, then that character opening the letter, then that character reading the damn letter, that illustrates all the narrative plodding that Spielberg's script and Michael Kahn's editing in Close Encounters avoids.

An even more fascinating artifact of the 1970s is Roy's decision to join the aliens in their intergalactic tour, a culmination of the hippie-vagabond impulse from the decade prior. Close Encounters makes this choice not even really a choice; it feels preordained, the character's destiny (and the director's cut, like the original theatrical release, wisely leaves us outside the mothership and the Disneyland interiors of the special edition). Roy clearly loves his kids and (perhaps less so) his wife, but hints of fissure exist even before his first extra-terrestrial encounter fractures these relationships irreparably. (Disruptive and damaging as the aliens' "invitations" are, they're still easier to forgive than the outright kidnappings of the WWII pilots and Dillon's son; somehow, though, you feel inclined to let these slide too). Spielberg has said that were he to make the movie today he would not have had Roy leave his family, and while that's an understandable outlook I'm glad he's resisted the George Lucas impulse to go back and change things. ("Sorry, I'm staying" - talk about a narrative dead-end.) Close Encounters is the kind of movie Spielberg couldn't make anymore even if he tried (occasionally, he has), not just because his worldview has shifted but because it has a confidence that most of his recent output lacks. The last movie he made prior to the debacle of 1941, it may have also been the last time he wasn't afraid to fail.
Posted by Craig at 12:55 PM 7 comments: 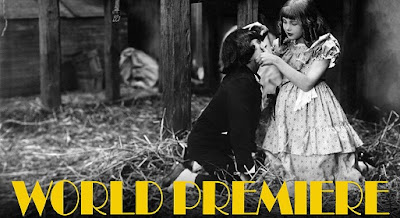 Though barely over a year old, the Indiana University Cinema has already started a February tradition of screening a silent film with an original score performed by live orchestra, a privilege made possible with the internationally renowned Jacobs School of Music on campus. Last year's inaugural film, Fritz Lang's Metropolis set to a classical arrangement, left a deep imprint on everyone who experienced it (and easily bested the clamoring Alloy accompaniment at Ebertfest a few months later). This year's selection, the 1922 screen adaptation of David Copperfield, by the Danish filmmaker A.W. Sandberg, commemorates the 200th birthday of Charles Dickens and throws in an extra twist with music by the youthful Ari Fisher, a Jacobs School sophomore who won a competition to compose a new score. Last night was the world premiere, with a tour of the country shortly to follow.

Suffice to say that Fisher's taste is impeccable, his instincts sound. He doesn't try to hip up the music, make it "relevant" in the Moroder manner. Neither does he crib from famous scores - much to Kim Novak's relief - nor does he Foley the movements of the actors. (One exception: the cracking sound of a whip, which is a tad jokey but not overplayed.) His score begins lushly and loudly over the opening credits, then drops into a lower key for most of the action. (The 18-piece orchestra sits in a narrow pit directly below the screen, and it's a huge compliment to say that you often forget they're there.) Occasionally it's a bit too low key; the intro is so evocative I wished he'd have returned to it more often. Yet as the plot branches off in several directions, the music becomes more varied. This adaptation of Copperfield is high on comedy, which the score underlines without goosing the audience. Unsurprisingly, there is a fair amount of pathos as well, and the score wisely opts for a discordant, percussion tone without cramming the portentousness down our throats. Dickens could be maudlin, but Fisher never is.

The movie itself is less than satisfying. One of the few Dickens novels I haven't read, my knowledge of David Copperfield is based largely on a classic Cheers episode, where Frasier Crane starts a book club at the bar and resorts to pulpy embellishments of the plots to hold everybody's attention. (Frasier: "It's about these two, uh, coppers who find several murder victims in a field...with their body parts switched." Carla, impressed: "Man, that Dickens was a sick dude.") I am, like the rest of the Western world, familiar with the names Mr. Micawber (played by Frederik Jensen) and Uriah Heep (Rasmus Christiansen), and both seem rather short-shrifted in Sandberg's film, which runs only 80 minutes. (Heep is barely introduced as the villain when he's quickly whisked away by the police for crimes we never see.) The narrative is top-heavy with David's impoverished upbringing and rushes through his later phase as a twentysomething lawyer (the younger and older Copperfields are played respectively by Martin Herzberg and Gorm Schmidt). There is a romantic triangle of a fashion, and a tragic death, and plenty of oddball humor involving donkeys (a Dickens or a Danish thing?). While the print is first-rate, the movie rarely compensates at the eye level: Sanberg's visuals are competent but never terribly imaginative.

It's probably unfair to compare an unknown version of a Dickens' classic with one of the greatest movies ever made, but Metropolis was a much more overpowering experience. Still, David Copperfield is worth seeing, if only just to hear it.
Posted by Craig at 11:37 AM No comments: