Best of Both Worlds (Paris, Texas) 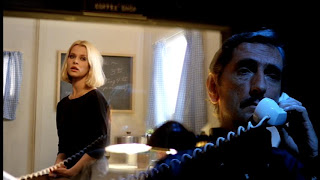 Paris, Texas: It took me an embarrassingly long time to catch the double-meaning of the title. An actual town in an actual state, certainly - somewhere that means something to the vagabond main character throughout all his wanderings. But the comma can also be read as Paris AND Texas, specifically the international/psychological space that the movie inhabits. Palme d'Or winner of the 1984 Cannes Film Festival, the film is a resplendent journey through the American southwest. Written by a buckaroo yet directed by a Teuton, Paris, Texas depicts this country, at a simultaneously particular yet universal time and place, with an insider's voice and an outsider's view.

In his (mixed) review of Taxi Driver, Jonathan Rosenbaum called that landmark work the product of "four auteurs": director Martin Scorsese; screenwriter Paul Schrader; actor Robert De Niro; and composer Bernard Herrmann. If they don't register quite the same sex appeal, a distinctive quartet of talent and personality comes together nevertheless similarly in Paris, Texas. Director Wim Wenders earned his "German New Wave" credentials via films like Kings of the Road (1976) and The American Friend (1977), the latter a crossover thriller starring Dennis Hopper and adapted from Tom Ripley novelist Patricia Highsmith. (Wenders peaked in the 1980s with Paris, Texas and Wings of Desire [1987], then appeared to lose his creative mojo before semi-reinventing himself as a Oscar-nominated documentary filmmaker with 1999's Buena Vista Social Club and last year's Pina.) Writer Sam Shepard was, at the time, best known for screen performances such as the ostensibly ill yet incongruously virile farmer in Days of Heaven and especially cowboy-pilot Chuck Yeager in The Right Stuff; on the New York stage, he earned acclaim as the playwright of Buried Child (1978), True West (1980), and Fool for Love (1983).

Actor Harry Dean Stanton, possessing "one of those faces" audiences recognized without knowing, had established an active career in movies and TV shows that were as varied (B-movies and Oscar-winners) as the characters were not: like Dennis Hopper, he specialized in nefarious types, before Shepard and Wenders offered him the role of Travis in Paris, Texas, "a name that still had sinister resonance" eight years after Taxi Driver's Bickle (as reminded by Nick Roddick in his wonderful Criterion essay), but a character that this time proved a showcase for Stanton's range. (That same year, of course, Stanton played what remains his most indelible scumbag, car-repossessor Bud in Alex Cox's Repo Man). Composer Ry Cooder was a virtuoso slide guitarist already with one memorable score to his name (Walter Hill's The Long Riders) before contributing to Paris, Texas an equally evocative sound. (As a screen presence, in Wenders' Buena Vista Social Club, Cooder comes across as an irksome narcissist; as a contributor of music, he is sublime.) Add a notable trio from behind the scenes - assistant director Claire Denis, production assistant Alison Anders, and "adapter"/script-refiner L.M. Kit Carson - and it's even easier to see why Paris, Texas is a remarkable achievement, each scene like lightning in a bottle that keeps on striking. 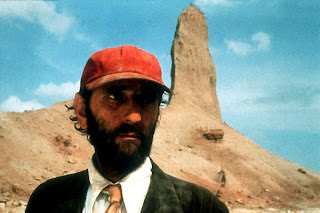 The movie begins with a potentially groan-inducing element - a man (Stanton's Travis) who can't or won't talk, and can't or won't remember who he is or what has happened to him - and keeps walking the tightrope of pretension without stumbling all the way to the end. The sad fact that much of Wenders' body of work since the 80s conveys a degree of ostentatious irrelevance suggests that in Paris, Texas he was in full command of his craft or else his craft found the perfect balance with the naturalism of his collaborators. Filtered through what is, in my opinion, some of the most amazing cinematography ever to reach the screen (by Robby Muller, favorite DP of filmmakers as diverse as Jim Jarmusch and Lars Von Trier, as well as the man behind the camera for Repo Man), the movie's opening aerial shot of the Mojave Desert, followed by tight close-up of a face as ragged and haunted as the mountains looming behind it, paints the kind of portrait of America a European connoisseur of Americana like Milos Forman could paint if Forman had anything approaching Wenders' ecstatic eye. (With amusing accuracy, Charles Taylor once described the Larry Flynt director's movies as looking like dirty dishwater.)

Paris, Texas also leavens its narrative with subtle humor: after Travis faints with a mouth full of ice in a nearly barren cantina, a mercenary physician (German actor-director Bernhard Wicki, looking appropriately out-of-place) restores him to health before pawning him off to Travis's younger brother Walt (Dean Stockwell, exuding touching reserves of decency and patience). As Walt drives Travis from south Texas to L.A., the movie, for a while, looks like it's going to be a road-picture along the lines of late-80s films like Rain Man and Midnight Run, even sharing with those films what is, in retrospect, a stereotypical scene where a character freaks out on an airplane. (The version of this scene here, at least, transpires offscreen, as Travis and Walt are allowed off the plane with a tongue-lashing from the stewardess but no reprisals, a reminder of air travel's quainter days.) Travis also insists that he and Walt drive back in the exact same rental-car, a rather unnecessary character trait that never comes up again (and which Rain Man would also seem to crib a few years later in the conception of Raymond Babbitt), except as a plot device to forge the relationship between the brothers. For this, it succeeds beautifully. By the time they hit L.A., the movie has established its unhurried rhythms, and Travis's memory returns.

In an interview on the Criterion disc, Claire Denis reports that Paris, Texas was shot chronologically, with an unfinished screenplay. I'm unclear if the script's incompleteness occurred before the second act, at Walt's home in Los Angeles, where Travis bonds with his French sister-in-law Anne (Aurore Clement) and the eight-year-old child he abandoned that Walt and Anne have come to raise as their own (Hunter Carson, son of L.M Kit); or the final act, in Houston, where Travis reunites his son with his estranged wife Jane (Nastassja Kinski, rounding out the remarkable Euro-American cast). Regardless, Denis implies that production delays - the result of everything from depleted funds to uncooperative Teamsters - gave Wenders & Co. time to think the story through. In so doing, they avoided the melodramatic trappings of their own worst impulses (e.g., aborting a planned violent climax between Travis and Anne) and attained something different, something true.

While the L.A. interlude has an array of lovely moments - Travis encountering a hollering homeless man along an interstate (the kind of man he was perilously close to becoming), Travis donning his brother's fancy suit to impress his son after school (an understated display of physical comedy for Stanton) - it is in Houston where the film flirts with cringeworthiness only to reach transcendence. Travis and Hunter track down Jane at a peep-show-for-the-soul, where she and other women act out scenarios for lonely men behind a one-way mirror. Has there ever been a more unexpected great performance in all of cinema than Kinski's? (Is that hyperbole? So be it.) Previously window dressing for a Roman Polanski period piece (Tess), with a more recent string of fiascos to her credit (The Moon in the Gutter and The Hotel New Hampshire, ill-advised remakes of Cat People and Unfaithfully Yours), Kinski, sporting a convincingly unfussy southern accent, shares two crucial scenes with Stanton in the concluding section of Paris, Texas. During the first, which at the time seems fairly long (five minutes or so), Travis, speaking to Jane via telephone, establishes a tenuous connection with her behind the mirror. ("I don't mind listening, I do it all the time," Kinski tells him touchingly, looking straight into the camera, a visual motif straight out of the Jonathan Demme/Tak Fujimoto playbook.) But it's in their second scene, an astonishing twenty-minute sequence, where Travis lays his cards on the table. Stanton monologues, Kinski monologues, in between they dialogue, and the authenticity of the emotions overcome what could have been stagey schematics in lesser hands. 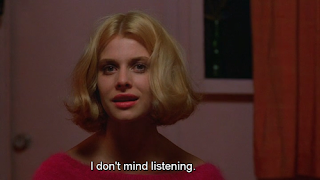 As Paris, Texas comes to its extraordinary close (and I defy you to name a more unsentimental movie that earns so many tears), the palette for the film undergoes a change. In south Texas and L.A., Travis is associated primarily with the color green; in Houston, Jane drives a red sports car, nearly always wears red. In the last act, Travis and Hunter wear red as well. Then, in the final scene, Jane and her son reunite, each wearing vernal colors; while Travis drives away, the darkened highway tinted crimson. Visually this could mean anything or nothing - had things ended bloody, as originally planned, the symbolism would have been obvious. As it stands, I like to think that the switch of colors are meant to show the lingering effect that the characters, separated once more, now have on each other. A mother and child are back together. A man comes out of the desert only to return to the unknown, yet thirsts no more.