The Devil Inside (Zero Dark Thirty) 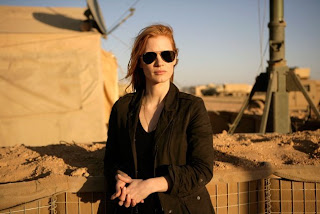 Shortly before Zero Dark Thirty came out, I flippantly remarked that I'd give the movie "bonus points if it spares us a Mission Control Applause scene." As you know, Mission Control Applause is nearly obligatory in dramatic thrillers depicting real-life, high-risk scenarios pulled off successfully while Ed Harris or Bryan Cranston barks orders at a team of men staring at computer screens with their shirt-sleeves rolled up and cigarette butts dropping to the floor. It's no surprise, at the end of Kathryn Bigelow's film, that the grand plan to kill Osama bin Laden succeeds; what is surprising is the absence of celebration. Instead of a hearty round of hand-clapping, Bigelow holds instead on the pensive expression of Maya (Jessica Chastain), the young, female intelligence operative who brought the ten-year pursuit of bin Laden to its end. Actually, her face is more than pensive. She looks haunted, as if the ghosts of 9/11 can never be fully excised.

Ghosts are haunting, indeed clouding the reception of the movie as well, namely the specter of Abu Ghraib that Bigelow and screenwriter Mark Boal - to either their credit or detriment - revive. As everybody knows by now, Zero Dark Thirty contains scenes at a CIA "black site" where an American agent named Dan (played by Jason Clarke) strips, dog-collars, hot-boxes, and waterboards a captured al-Qaeda member named Ammar (played by Reda Kateb). Maya, who is introduced during these passages as a troubled yet complicit bystander, eventually learns from Ammar the name of a courier ("Ahmed from Kuwait") whom she comes to believe is in the employ of bin Laden. Some critics - an odd, unwieldy mix of admirers of the film (Owen Gleiberman, David Edelstein), politicos with insider info (Dianne Feinstein, Carl Levin, John McCain), and left-wing crusaders who either have or haven't seen the movie (Glenn Greenwald, Ed Asner, Martin Sheen), it isn't always clear - have traced the steps from the black site to bin Laden as evidence that Zero Dark Thirty is saying "torture works."

While it appears that Boal and Bigelow have, in raising this topic, opened a Pandora's Box more incendiary than their methods (or interview statements) can quite get a handle on, I think that their stance is more complicated than these connect-the-dots reviews suggest. This is evinced not only in what Glenn Kenny perceptively defines as Bigelow's "film grammar," which conveys sympathy for Ammar in the early scenes (as a suffering and degraded human being, even though the movie never lets us forget he is also a terrorist with ties to 9/11), but in the narrative itself. Mark Bowden (author of The Finish: The Killing of Osama bin Laden, which I haven't read) is one of only a few discerning viewers who have pointed out that the initial torturing of Ammar does not, in fact, accomplish Dan's objective - the prevention of an attack in Saudi Arabia - and that the discovery of the courier is obtained through Maya's subsequent kinder, gentler act of subterfuge. Others, like Jeff Reichert at Reverse Shot, have referred to a later scene, where Maya's friend and colleague Jessica (Jennifer Ehle) shakes her head dismissively during a broadcast of newly elected President Obama's condemnation of the treatment of detainees, ostensibly in response to the man's naivete. Yet this overlooks what ultimately happens to Jessica, involving a lead in Afghanistan that turns deadly, and could be inferred as payback (direct or karmic) for the detainee program.

The controversy over Zero Dark Thirty has become convoluted to the point where smart and stupid things are being written by the same people in the same pieces. Bowden interrupts his otherwise sound reasoning with an silly anecdote that suggests we know Kathryn Bigelow isn't pro-torture because he heard she's a nice person. Conversely, Reichert makes amid some inaccurate interpretations the most valid criticism I've read about the movie: that Zero Dark Thirty's journalistic realism is, like all "reality-based" cinema and television, just another fictional construction. "When Olivier Assayas...mounted Carlos, a similarly scaled production dealing with global terrorism, his opening card noted the necessary fictionalization of events," Reichert notes. He goes on: "Bigelow and Boal stick to their personality-free 'just the facts' approach as obsessively as their heroine sticks to her dogged pursuit of bin Laden, but what happens to a film like Zero Dark Thirty when the filmmakers' facts are hotly disputed, especially by people who are in a far better position to know?" 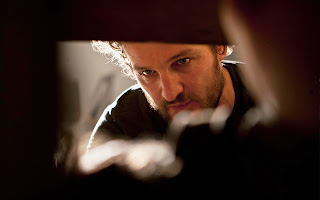 What happens, unfortunately, is we're left with one of those movies shanghaied by the agenda-mongerers, a film whose veracity and artistry can't be viewed entirely clearly in the present day. This will likely mean a shutout at the Oscars (oh-deary-dear!), among other irksome side-effects. Yet while I can't speak for the movie's veracity, I do believe, once the dust settles, its artistry is going to hold up well over time.

As a longtime non-fan of the "reality approach" (jittery cameras, etc.), I have to give Bigelow her due as its reigning expert. Less obtrusively than Paul Greengrass, she has, in her two collaborations with Boal, developed a style that looks "journalistic" (read: objective) yet embeds within that style a subjective perspective toward the events it's documenting. This leads us back to the issue of film grammar, and the notion that whereas a picture used to be worth a thousand words, now, it seems, a word is worth a thousand pictures. Just as some viewers cannot discern Bigelow's position on torture via her visual language, both fans and foes of Zero Dark Thirty have been praising or condemning the movie entire for "not taking a stand" and "letting you draw your own conclusions." It's true that Bigelow doesn't overtly push an agenda, nor do she crowd us, as Pauline Kael once complained about Oliver Stone. Her approach is visceral, not intellectual. And I think, in purely visceral terms, she has a pretty clear viewpoint about what she's depicting.

Zero Dark Thirty, like David Fincher's Zodiac, is a procedural about an obsessive manhunt that shows the effects of the hunt on the obsessives. Some of this is explicit: Black-Site Dan, for example, tells Maya that he's returning to Washington for less stressful work (and, not incidentally, because he tips her off that oversight committees are forming, and "you don't want to be the one caught holding the leash"); there are also a telling couple of scenes where Dan enjoys playing with monkeys in a cage (one, to his delight, steals his ice-cream cone), then gets upset that they were killed out of concern that they'd escape. Yet much of what happens is implicit, not just the look on Maya's face as she watches hours of video of tortured prisoners, but the way Bigelow's camera glides by a computer monitor for a fleeting glimpse of a digital image of Maya and Jessica on the desktop. It's in the completely unremarked-upon international gallery of light- and dark-skinned players who help Maya link the elusive Ahmed to bin Laden, among them none other than Edgar Ramirez (Carlos the Jackal himself), as well as the expressive Lebanese actor Fares Fares. (I do wish American movies, even well-intentioned ones like Zero Dark Thirty, would give foreign actors like Fares more to do besides stare suggestively.) It's in the opening prologue, similar to a scene in Michael Moore's Fahrenheit 9/11 in depicting the events of September 11 via audio on a black screen, except Bigelow and Boal focus on one phone call from a victim trapped in the Towers and a 911 responder - both women, which subconsciously prepares us for the female protagonist we are about to encounter. 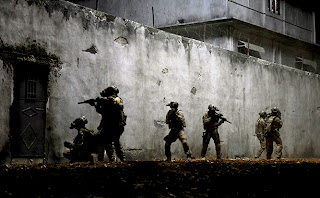 Most powerfully, the clarity is there at the end, a stunning thirty-minute recreation of the raid on bin Laden's compound in Pakistan. I'd be lying if I didn't admit looking forward to this sequence, to obtain some kind of visual "closure" in something we've all only heard or read about (most notably in Nicholas Smidle's superb August 2011 New Yorker account). Bigelow is uncannily good at casting familiar faces in small yet crucial parts (remember the doomed Guy Pearce and Ralph Fiennes in The Hurt Locker?), and among the Navy SEALS who led the assault are Joel Edgerton, Chris Pratt, and other actors capable of simultaneously embodying courage and lack of virtue. It's precisely this multifaceted approach that makes closure anticlimactic, unreachable. The details of the raid are vivid and unfussed-over (like the Belgian Malinois - similar to a German Shepherd - brought along, Smidle informs us, to sniff out false walls or hidden doors). Yet we miss nothing: a woman is killed; children wail; an extra bullet is put in each body unceremoniously. The killing of Osama bin Laden happens in the corner of the frame and is over in the blink of an eye.

If I were the type of critic who always feels the need to "balance" a positive review by pointing out a few flaws ("That thing in the corner, I don't like that thing"), I would mention that Boal's script includes a few cliches that clang (Maya telling off her superiors, etc.), and that Bigelow's staging of a long set-piece involving Jennifer Ehle could use a tad more imagination for leading to such a predictable outcome (ditto Alexandre Desplat's ominous "Middle Eastern" music). Boal is an odd talent, fumbling between occasionally overcooked zingers with lines of terrific precision and insight. (When told that Maya is smart, James Gandolfini's CIA Director deadpans, "We're all smart.") Yet he sidesteps many of the cliches Ben Affleck wades into in Argo: Maya's singlehood is brought up briefly and dropped quickly, without any couched family-values implications of disapproval.

Moreover, Boal has brought out the best in Bigelow. Their collaboration on The Hurt Locker, however impressive, has been eclipsed by their achievement here. As Tom Carson explicates, "the movie is about the moral, psychological, and even spiritual price we paid" to bring down bin Laden. It's there in the words, and most of all the images; and it's in the latter quality that the movie ultimately departs from David Fincher's aforementioned great film about the Zodiac killer. The main characters in that film see their lives destroyed by the case. With Dan, whom we see startlingly fresh-faced later in Zero Dark Thirty, and Maya, shedding tears at her mission's end, we can only imagine the damage that has been done to their souls. Yet a lingering shadow across their eyes - as well as the victorious SEALs, on the helicopter ride home, looking silently upon the corpse of the evildoer who so feverishly occupied the American imagination - is clearly, unambiguously there. It isn't hard to see why. In Zodiac, the monster is never found. In Zero Dark Thirty, the monster is killed at last. And it's a decrepit old man in a body bag.