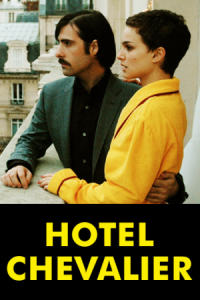 A young American male, in about his late-20s, lies down in a Paris hotel bed and orders room service in passable French. (Like so many of us, he halts at the word "grilled-cheese.") Seconds later he gets an unexpected phone call from a deep-voiced young woman, who informs him that she has arrived from the States and shortly afterward comes to his room. They embrace awkwardly, they fumble for conversation, they fall into bed, they go outside and look at the view. In the hands of, say, Harold Pinter or Neil LaBute, the visuals would be peeled-wallpaper cheap, the atmosphere fraught with deadweight contrivances. But this is a short film by Wes Anderson, who has a gift for making the mundane magical.

Hotel Chevalier, which as everyone knows is Anderson's 13-minute prologue to The Darjeeling Limited (coming to a theater near me, and hopefully you too, on October 19th) that was cut by the studio before Darjeeling's official release. Now available for free on iTunes, Chevalier stars Jason Schwartzman (who appears in Darjeeling along with Owen Wilson and Adrian Brody) and Natalie Portman as the aforementioned couple, and they are exceptionally good at conveying a broken relationship that nonetheless retains a mysterious organic connection.

A common observation about (and sometimes a swipe at) Anderson's work is that it embodies a child's-eye view of the world. What I see is a more egalitarian perspective in which both children and grown-ups occupy the same sphere. When Dirk Calloway confronts Herman Blume about his affair with Miss Cross in Rushmore, or when Royal casually pans an early play by his daughter in The Royal Tenenbaums, there is none of the patronizing of either the older or younger generation that one often sees in movies aimed squarely at teenagers or adults. Anderson doesn't shy from truth or pain in his films; and in so doing, he treats his characters as equals.

In Hotel Chevalier, Schwartzman and Portman (we never learn their characters' names) are somewhere between the grown-up world and the childlike. Schwartzman has grown more handsome since his Max Fischer days, and Portman is evolving into every bit the luminous woman that Timothy Hutton in Beautiful Girls predicted her preternatural 13-year-old would become, yet there is something still touchingly vulnerable about them that is hinted at more than spoken. He collects insects and evidently designs miniature dioramas. She has bruises on her body (we the audience notice them before he does) and fiddles with a toothpick between her teeth. Anderson's fetishistic visual style demands so much attention that it distracts from just how good he is at depicting intimacy. The entirety of Hotel Chevalier is in a way a complement to the great scene between Luke Wilson and Gwyneth Paltrow lying inside a tent in The Royal Tenenbaums, only with a slightly more adult ambiguity. We are left unsure about the exact nature of the relationship, but the emotions are familiar and real. "Whatever happens in the end," Portman says with hushed urgency, lying on top of him in bed, "I don't want to lose you as my friend." Sadly but firmly, Schwartzman replies, "I promise I will never be your friend."

Although Hotel Chevalier was intended as an overture to The Darjeeling Limited (and leaves me eager to see the full-length movie), it holds up beautifully as a self-contained piece. I thought that Anderson's last movie, The Life Aquatic, suffered from the miscasting of Bill Murray in what called for a megalomaniacal Gene Hackman-type in the lead. (Murray's been a wonderful reactive performer in his other films for Anderson, but he's out of his element as a driven go-getter.) Admirers of The Life Aquatic have regarded that film as a maturing from Anderson's earlier works, but I think that Hotel Chevalier is a more pivotal act of progression for this highly distinctive filmmaker. In a limited running time that never feels rushed, it accomplishes what most of the short features in this summer's anthology film Paris, je t'aime (which included Natalie Portman in one of its more interesting efforts, Tom Tykwer's "Faubourg Saint-Denis"), failed to achieve. With the tactile quality of a classic short story, it attempts to capture in amber a moment in time which, like all moments, inevitably slips away.
Posted by Craig at 2:16 PM