A Close-Up Connection (Or: What Do Billy Wilder, Wes Anderson, and Feet Have in Common?)

Here's a shot from an early scene in Billy Wilder's Stalag 17, which as I recall comes soon after a failed escape attempt by some American POWs: 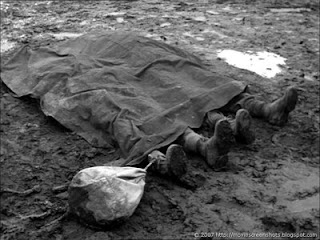 While I'm unsure if technically this is a close-up (are there official AFI spatial standards?), I'm going with the idea that there is a body part that's being emphasized; and Wilder uses it as a grim reminder for what's at stake amid the seriocomedy that follows throughout the film.

Now here's one of the opening moments in Wes Anderson's Hotel Chevalier (i.e., Part I of The Darjeeling Limited). Click on the image to enlarge it:

On the television, to the left, is the very same shot from Stalag 17. On the bed, to the right, are Jason Schwartzman's feet, in a humorous mirroring of the scene from Wilder's movie.

What is Anderson--a fetishistic, ephemera-obsessed filmmaker for whom hardly anything in a frame is left to chance--trying to convey with this shot? Is he suggesting that Schwartzman's character, despite his spacious hotel room and fancy pajamas, is also something of a dead man? Is Schwartzman in a kind of metaphorical prison camp too, or did he just escape one in the form of his relationship with Natalie Portman? Or did Anderson just happen to find it funny?
Posted by Craig at 7:00 AM

This is such an interesting shot; it is very carefully composed with a painter’s eye. The hotel room is a tableau, complete with a stage-like curtain, designed to tell us the story about this character’s state of mind. And the big contrast between the setting of the room and the scene on the television is striking (thanks for identifying it, Craig, I wouldn’t have known the source of the image): the grainy black and white image sharply contrasts with the sophisticated and subtle colors that saturate the room. Anderson is inviting comparison with this image of the brutality of war appearing inside this elegant, comfortable interior which is in Paris, a pinnacle of civilization and culture. There’s also the contrast of a staged tableau-like scene containing a raw, documentary-like scene.

And at the same time, it is very funny. The visual parallel between the man’s feet on the bed (which are somehow childlike in their vulnerability) and the feet of the dead men on the screen is unexpected and absurd.

I think all of this is meant to give us important clues about the man’s emotional state: he has cocooned himself in this opulent room and he appears to be suffering from some kind of shell shock, it hints that, for him, it’s the emotional equivalent of the bodily devastation seen on the screen. And the TV image also acts as a kind of foreshadowing of the evidence of violence we see a few minutes later in the bruises on his girlfriend’s body. I'm fascinated by how much is going on in just this one shot.

I never noticed the stage curtain until you pointed it out, but that's been a recurring motif in his movies (at least Rushmore and Tenenbaums). I think it's safe to say that Anderson--unlike Spielberg--does see the proscenium arch (which isn't disparaging to either filmmaker, just different ways of looking at the world). There's always a lot going on in Anderson's films, which is probably why they seem to age well, and you've found more in this one shot than I could have imagined.