QT and the Women 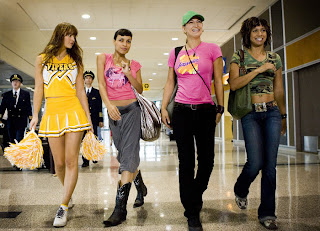 I'm not sure how I feel about Death Proof, and that's probably a good thing. Severed from its conjoined twin Planet Terror (which I still haven't seen) for DVD after its initial release in theaters as a Grindhouse double-bill over Easter Weekend mysteriously failed to attract an audience, the movie as a stand-alone effort will undoubtedly prompt many viewers to throw in the towel early. The impulse is understandable. Annoying, upsetting and exhilarating in more or less equal measure, Death Proof is the first film in a long while that has left me feeling uncertain about my own reaction. For that ambivalence alone, I'm tempted to swing in Tarantino's favor.

Quentin Tarantino is viewed, often unflatteringly, as a manly man's director who makes manly movies about manly things. The guns, the suits, the tough-guy talk, the geek-boy enthusiasm for arcane trivia are all that a lot of people see and hear. As such he gets lumped in with what David Denby called the "leathery types" (Huston, Peckinpah, Altman) whom Pauline Kael admired so much, while simultaneously deemed second-tier to them artistically. Yet unlike the aforementioned roughnecks--whose films, with their unwavering machismo, have sometimes grated on my nerves--there is an unappreciated feminine streak that flows through Tarantino's work, of which Death Proof may be the apotheosis.

Tarantino's portrayal of women seemed virtually nonexistent in his debut, Reservoir Dogs, with all the speaking parts in the movie (and, Christ, do they talk) going to his all-male main cast. But from the famous opening scene--a lengthy discussion in a diner with digressions on Madonna, "The Night the Lights Went Out in Georgia," and the waitressing profession--it is clear that women are prominently on Tarantino's mind. More subtle is the complex relationship at the heart of the film between Mr. White (Harvey Keitel) and Mr. Orange (Tim Roth in a brilliantly ambiguous performance). When Orange gets shot as a result of the heist (and has there ever been another director who so encourages his male actors to scream?), White takes care of him with revealing details: holding Orange's hand, caressing his temples, running a comb through his hair. One could argue that Mr. White's concern is that of a friend or a father figure, but I see it depicted with a lovingly intimate femininity that subverts the genre.

Tarantino's passion for gossipy conversation carried over to Pulp Fiction ("When all you hens get your heads together," Uma Thurman's trophy wife informs John Travolta's hit man, "you're worse than a sewing circle.") Additionally, he created a handful of supporting female characters with distinctive personalities. Most of the attention was paid to Thurman's Mia Wallace, who effectively conveys a woman who seeks danger as a means of staving off boredom, and Amanda Plummer's Honey Bunny, who learns during a restaurant robbery that she's not cut out to be a killer. For me, it is the Portuguese actress Maria de Medeiros who, in her limited screen time, registers the most strongly. In her one major scene, played mostly in the shadows of a hotel room, she wakes up in bed to the arrival of her boxer boyfriend (Bruce Willis) who has just killed a man in the ring. Oblivious to this (and, one senses, all unpleasantries), she launches into a long, funny monologue about wishing she had a pot belly. ("You wish you had some pot?" Willis asks, hearing her incorrectly.) De Medeiros isn't directly involved in the action that follows, she's never in danger; and if this makes her a passive character it also indicates Tarantino's refusal to follow cliche and use her for cheap effect.

It was in first Jackie Brown, followed by the Kill Bill movies, that Tarantino's women moved from the periphery to the center. Starring Pam Grier, an icon from the 70s-era blaxploitation movies that he loves, Jackie Brown is, on one level, Tarantino's engaging B-movie adaptation of an Elmore Leonard crime novel (Rum Punch), and one of a trifecta of films in the late-90s (with Barry Sonnenfeld's Get Shorty and Steven Soderbergh's Out of Sight) which, unlike several previous Hollywood botches, maintained Leonard's sensibility onscreen. Moreover, it offered one of the most mature portraits of a middle-aged woman (and a middle-aged romance, between Grier and Robert Forster) in recent movies. As Charles Taylor's review at Salon pointed out, Tarantino's camera was highly attuned to Grier's sexuality. "I've never seen a young filmmaker as alive to an older woman's beauty in quite the way Tarantino is here," Taylor wrote. "It's not coarse, but it's not a chaste appreciation." Nor was it chaste in either volume of Kill Bill, with Tarantino's unreserved worship of Uma Thurman's killing machine--Beatrix Kiddo, a.k.a. "The Bride"--uncomfortably blurring the line between character and actress. (Everyone in the movie is always complimenting her looks and her brains and, though I can't quite remember for sure, perhaps even her fashion sense.) Yet a complicated view of the destructive potential of male-female relationships comes through the titular character's climactic monologue (wonderfully delivered by David Carradine, who possibly gets more dialogue with his windbag guru than in all his seasons of Kung Fu combined). When Bill informs Beatrix that she is incapable of being honest about her feelings for him, it is as a man who has punished the woman he loves (and himself) because she failed to live up to his overidealized view of who she is. 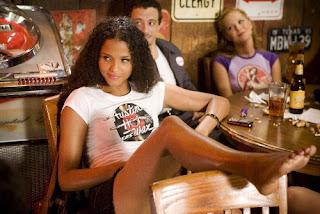 Which brings us to Death Proof. Much has already been said about this polarizing work--it's boring, it's masterful, it's the nadir of Tarantino's career, it's his most personal expression yet--and I concur in varying degrees with all of these summations. His female protagonists--a quartet of women in the movie's first-half, then another foursome in the second--are deeply sympathetic, yet allotted too many scenes of interminable dialogue. The brutal dispatching of the first group is done with Hitchcockian skill, but it also contains the director's at-times appalling sadism. (As this scene and a couple of sequences involving children in the Kill Bills indicate, Tarantino is struggling to show more serious ramifications of violence but still has a long way to go.) The second group's turning the tables on Stuntman Mike--and Kurt Russell's blood-curdling screams (a call-back to Roth's in Reservoir Dogs) are horrifically funny--manages to be both cathartic and something of a cop-out. Perhaps the most coherent assessment of this mishmash came from Matt Zoller Seitz and Keith Uhlich's online debate, namely when the former wrote that "while (Death Proof) certainly doesn't absolve (Tarantino) of charges that he likes to see women get hurt (as if he doesn't love to see men get hurt, too), it also establishes that he doesn't hate women....I think he fears them and is in helpless awe of them." (This reminds me of Jane Hamsher's painfully hilarious anecdote in Killer Instinct, her book about the making of Oliver Stone's Natural Born Killers--for which QT wrote the initial screenplay--where she reveals a photographed copy of a mash note written by Tarantino complimenting her "leggs" [sic].)

That said, I couldn't disagree more with Seitz that Tarantino's movies fail to contain deep feeling. I've been moved countless times: Chris Penn offering Michael Madsen's paroled criminal a job, calling him a "fuckin' rabbit's foot" in Reservoir Dogs; Tim Roth putting on his wedding band, which may or may not be real, before meeting up with his cronies, also in Reservoir Dogs; the dance contest in Pulp Fiction, which left the rowdy college audience I attended it with in hushed rapture, and Travolta blowing Thurman a kiss a little later in the same; all of Grier and Forster's scenes together in Jackie Brown; Sonny Chiba solemnly offering Uma Thurman his sword in Kill Bill Volume I; Thurman's final scene with Carradine, filled with messy emotion, in Volume II. While I wouldn't go so far as to claim these scenes derive from any kind of feminist sensibility (if Tarantino has any sociopolitical consciousness, he's kept it to himself), I would argue that their tenderness is indicative that his creativity derives from a largely feminine impulse. For all its flaws, Death Proof shows that Tarantino is continuing to develop as an artist; and this growth, increasingly dependent on women, is proof of life.
Posted by Craig at 6:12 PM

Helen, if you've never seen a Tarantino movie before, may I suggest Jackie Brown as a good starting point? I wouldn't say it's his best movie, but it's arguably his most accessible, minimally violent and torture-free.

Craig,
I have shied away from these movies mainly because of the level of violence, so thank you for the suggestion. I'll check back in after watching Jackie Brown.

I feel that many films today have become too "Pulp-Fictiony", and less and less "Lawrence-of-Arabiay" and less "Das Boaty" and less "Brokeback Mountainy"
(did I mention that Heath Ledger is dreamy?)
disgruntled ex-roommate

Craig,
I'm back to say thank you for the suggestion because now I'm very happy that I've finally seen a Quentin Tarantino movie and Jackie Brown was a lot of fun. I really liked all the little moments, the small things that went on, like Melanie teasing Louis about not remembering where he parked his car at the mall. Or watching Ray carefully marking the bills. And little lines like Jackie's remark that her milk had gone bad while she was in jail (I hate it when that happens). I wondered why Max Cherry's entrance in two scenes was him coming out of the bathroom at his office--why wasn't he just at his desk? I thought that stuff made it fun and made it seem real; all the mundane, daily life stuff took up as much space (or more) as the crime/action stuff. And it contributes, I think, to the connection between Jackie and Max feeling genuine and very sweet.

A thesis could probably be written on the importance of bathrooms in Tarantino movies. He's arguably second only to Kubrick on that score. I'm glad you liked the movie. It's been a while since I've seen it, but Bridget Fonda goading DeNiro is one of its most memorable scenes.