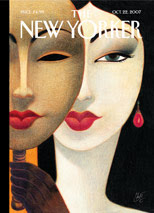 Somewhere, James Wolcott is gagging: both Adam Gopnik and David Denby are featured in this week's New Yorker. While Denby's is standard Eeyorian fare from The Man Who Mistook a Movie for a Meteor (Wolcott's words), Gopnik's piece at least has an interesting subject in the novel abridgements, director's cuts and DVD commentaries that are all the rage. As usual it's hard to tell Gopnik's point without sending a canary down the mineshaft, but speaking personally director's cuts are usually marginally interesting at best and delusional egotism at worst. I never saw the theatrical release of The 40-Year-Old Virgin--which I understand was overlong to begin with--but watching the Extended Smut-O-Version, much as I enjoyed it, I found myself making mental edits in my head all the way through. Virtually the only filmmaker who has earned the right to release longer movies is the godfather of the director's cut himself, Ridley Scott. Of course Blade Runner is the most famous example of a film that flopped originally in theaters, thanks in part to studio hacking and tampering, but has since become a classic after being restored (more than once) to Scott's original vision. I also recall not thinking much of Gladiator when it first came out. When I saw the extended edition (about 20 minutes longer), I couldn't believe how much better it was, how smoother the transitions from scene to scene were, how much more depth and shading were given the characters.

Gopnik's essay also had me thinking of something else: How much adding or editing bloggers do to their posts after they're published? Rarely have I written a post where I didn't go back and make a correction or change a word to what seems like a better one. Is this typical for most bloggers, or do you tend to leave your stuff as is?
Posted by Craig at 5:47 PM

I see you did not include the greatest film of all time....Hoop
Dreams. It was on the Sundance channel. I did not watch it because I was not blitzed at the time. I also see that the movie "Big Man on
Campus" failed to make your list of "favorites"...for shame. Everyone likes "The Godfather", or "Lawrence of Arabia" but who sings the praises for such epics as "Up the Creek" or "Boobarama" --- No one I tell you. So Mr. Simpson, if that is your real name, good luck with your "list". I have to stop
now since my computer won't let me use any more ""'"""'s. Apparently
there is some kind of limit. Good day to you sir.

How long have we had this rift between us? Five minutes, you say? Far too long a quarrel for old friends! I remember fondly watching "Hoop Dreams" with you all those years ago, as you managed to single-handedly undercut everything worthy about that film. (No details, please. This is a family blog.) For those readers not in the know, let us just say that Brian was far ahead of the MST3000 game of satire, only far less selective in terms of targets. Ebert would have been aghast.

Master Simpson,
I wear my lack of political correctness as a badge of honor as you know. As I have said, it is easy to make fun or denigrate people like Hitler, Stalin, Mao, or The Monkees (season 2). Where is the challenge in that? It is much harder to pick on someone like...oh, I don't know...Mother Teresa. Things come to my mind like "Sure, she helped a lot of people and was probably one of the most truly decent people on Earth, but where the hell was her fashion sense?"

Now take Brokeback Mountain. Everyone in Hollywood just loved it. Most think it was about gay cowboys coming to grips with a society which was hostile to their true sexuality and the profound sadness the men lived with their entire lives. Personally, I think it was just another buddy-picture which went horribly, horribly wrong. (My the way, Heather Ledger is just dreamy).

Having vented a little, I now feel like a gruntled ex-roommate.

I bid you a fine day good sir and happy viewing.

Brian, getting slightly back on topic--what's your take on director's cuts? I remember us watching the extended edition of "The Abyss" and not thinking much of the nukes-are-bad padding at the end. What do you think of the longer versions of "Das Boot," Blade Runner," etc.?

The director's cut of Das Boot was much better than the original, and incidentally the subtitled version was much better than the dubbed version. The dubbed version lacked the emotional impact that the german version had. Another example is David Lynch's Dune, which in its original version was confusing and you had no idea what the hell was going on. I saw the director's cut on sci-fi and there was a lot more historical and political background explaining who was who and what was what. Even though it made the movie even longer, I believe over 4 hours it was much better. Parts of the extended version of the Abyss were not to bad, but I hate the political messages stuck in.

I've never heard you say anything nice about Lynch before, and I'm normally not a fan either, but I'll have to check Dune Redux out.