Never having been to New York, I happily glean what I know of the city through movies, books and television shows. (Yes, I suppose I could read a magazine, but durn it, that wouldn't save time.) Admittedly, a culture critic unfamiliar with Sinatra's kind of town carries probably all the clout of an Opus Dei member who's never toured Rome. Moreover, just as East Coasters often appear to view middle America through the lenses of Alexander Payne (we're fat and ignorant), the Coen Brothers (we're rubes with funny accents), and David Lynch (we like apple pie and we dream about dwarves), I am aware that my overreliance on artistic mediums can leave me suspect to stereotypes and biases. So let's get on with them, shall we? 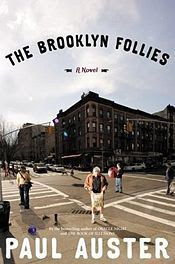 New York is provincial.
Based on novels like The Brooklyn Follies, New York City seems less a sprawling metropolis than a series of petty fiefdoms. At the start of the novel, the titular borough is where the narrator, Nathan--insurance salesman, ex-husband, screw-up extraordinaire--explains that he moved to in order to die; by the end, he has survived familial dysfunction, a rare books scam, and medical maladies just in time for 9/11. If the abrupt intrusion of a real tragedy feels unearned, that is partly because the author, Paul Auster, writes in coy prose, employing a literary device--Nathan crafting a work called "The Book of Human Folly"--that would have made Erasmus gag. A more significant reason is the implausibility of its characters. Auster wants to pull off what Richard Russo accomplishes on a regular basis: to depict the lives of flawed people with good hearts and big dreams. But oddly enough, the only character who rings true is his most florid creation, a flamboyant book dealer named Harry Brightman, whose tragic end is the novel's most moving moment. The blurbs speak muchly about Auster's warmth and compassion; but the fact that the only sequence outside New York--in North Carolina, where Nathan goes to retrieve his estranged niece from the arms of a bible-thumping nutcase (natch)--views the outside world in unequivocably negative terms tells you all you need to know about the provincialism of the author's worldview. 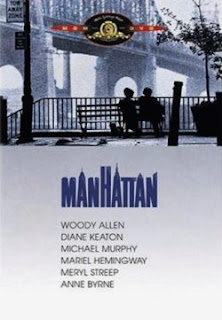 New York is insular.
Made three decades before Auster's book, Manhattan is, of course, Woody Allen's cinematic mash note to the city that he loves--which, if I understand him correctly, is overrun with pretentious intellectuals with voracious sexual appetites. I saw the film for the first time in its entirety only a few weeks ago on TCM, and I was struck how Allen's snarky satire is contrasted, even heightened by the lush romanticism of Gordan Willis's cinematography and Gershwin's music. For me, the key storyline in the movie involves Allen's teenage girlfriend wanting to study abroad in England. Even more than Auster, Woody Allen fears the outside world. But the Allen of Manhattan, at least, was in on his own joke about the insularity of his existence. He understands, and perhaps even envies, why particularly for a young person with her whole life ahead of her, the world outside would be enticing.

New York leads the world (when it's not behind it).
Mad Men, my favorite post-Deadwood TV series, is set in an even earlier New York City. It is the year 1960, and the show's ensemble, comprised of employees at a Madison Avenue advertising agency, are blithely unaware of the momentous changes in store for them and their country. Much of the dramatic tension derives from the entitled conservative outlook of the patriarchy of the Sterling Cooper agency (who support Nixon and Big Tobacco) and the more visionary thinking of a few of the younger characters. As a friend pointed out, while the costumes and lighting uncannily recreate the mood of the period, the tone is not nostalgic. Critics have pressed charges of inaccuracy about the time period as well as the atmosphere of the city in the early 60s. (I'm reminded of the hostile reviews that greeted Eyes Wide Shut, which seemed to complain that the film wasn't a documentary about the high-society orgy set.) I think that Mad Men, like any good dramatization, is focused more on the authenticity of its story than its backdrop. Interestingly, though, it shows a city at once on the pulse of the nation (its ads, after all, tell us what to buy and how to think) yet in danger of falling out of step with the rhythm of the times.

New York brings the funny.
And no TV show is currently funnier than 30 Rock. Since the series began, Tina Fey has had tremendous fun with her New York milieu and last week's episode--featuring Carrie Fisher as Liz Lemon's idol, a has-been, socially-conscious comedy writer who takes a recently fired Liz back to her dive apartment to begin anew ("Never go with a hippie to a second location," Alec Baldwin's NBC executive hilariously advised)--was no exception. But the show's best episode to date, last season's joyous "Cleveland," depicted the world outside New York's skyscrapers not to be feared, but as a benevolent wonderland. (Baldwin again: "We'd all like to flee to the Cleve.") Like Seinfeld, 30 Rock's sense of humor manages to be a product of a distinct New York sensibility yet completely universal. It is perhaps fitting that among the many works of art set in the Big Apple, a sitcom aiming to be nothing more than funny would be the most generous and inclusive of all.
Posted by Craig at 8:27 PM

Thanks, Paul. I like Sommer very much on the show. Looking forward to the interview.

Here's a title to add to this list (and this is dangerous because this list could get very long very fast), but this is worth adding:
Ian Frazier's collection of essays and stories, Gone to New York: Adventures in the City (2005).

It covers several of your categories at once; it's about little details of the city and at the same time it's about Manhattan's connectedness with the rest of the planet, and it is very, very funny.