Shaken and Stirred: A Closer Look at Casino Royale (Prologue)

There is often much hullaballoo over whether a good movie is actually bad or a bad movie is actually good. Less discussed is whether an almost universally praised movie is even better than its admirers originally believed. When I first saw Casino Royale two years ago, I was so stunned I could barely formulate a response. Here was the latest entry in an increasingly passe franchise, helmed by a competent director-for-hire who had never made anything special, starring a character actor untested in a major role -- and it was amazing. While I was tongue-tied, and my colleagues were busy yammering over whether or not the torture sequence should have earned the film an an "R" rating (oh, please), there was one critic, Owen Gleiberman, who had the balls (if you'll pardon the expression) to rank Casino Royale as the best movie of the year.

Only two years later, I'd say he more than got it right. Casino Royale is holding up as one of the defining films of the decade; every time, I see it, I see something new. And rarely can I watch it from start to finish. I have to break down the experience into segments, such as I'm about to do here.

Prologue
One of the great pleasures of the Bond series has been its opening prologues. Usually they have little or nothing to do with the main feature, but are instead stand-alone short films depicting the end of a previous adventure. Spielberg and Lucas would later using this template in the Indiana Jones series, employing the climax-as-introduction in order to give the audience a boost going into the movie.

The director of Casino Royale -- Martin Campbell -- and his screenwriters -- Neal Purvis & Robert Wade and Paul Haggis -- knew going into this picture that they were in desperate need for a fresh start. Bond had gone stale, through no real fault of the last actor to portray him (Pierce Brosnan), but rather by clinging to an archaic formula: the suave, misogynistic, tuxedoed spy who kills and sleeps his way through each movie while barely breaking a sweat. Yet that formula was a large part of the franchise's appeal. If they veered too far away from the template, would the essence of Bond be lost?

Campbell puts his cards on the table right away in the beginning sequence, as audacious an opener as I can remember. We fade in to an exterior shot of a building in Prague, photographed in lustrous black-and-white by Campbell's usual cinematographer, Phil Meheux (who really outdoes himself here). In a sequence reminiscent of The Spy Who Came in From the Cold, a trenchcoated man rides an elevator up the tower to his office, only to find Bond (Daniel Craig) waiting for him.

Unlike most Bond prologues, this one is quiet, economical, and dialogue driven. (It also doesn't start with the famous gun barrel POV, which, as David Edelstein noted, is "cunningly delayed.") The older spy in the trenchcoat, whose name is Dryden and is evidently a traitor, sits down and covertly opens a desk drawer, where we see a gun.

Dryden: Benefits of being section chief. I'd know if anyone had been promoted to double-oh status, wouldn't I? Your file shows no kills, and it takes...
James Bond: Two. 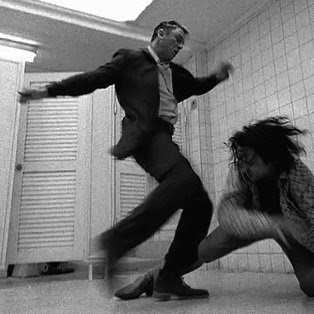 Astonishingly, Campbell then cuts to a flashback sequence, in even starker black-and-white footage, featuring Bond in a brutal struggle with Dryden's contact in a restroom. This is, we quickly understand, Bond's first kill, and it is fitting that Campbell and Meheux choose to overexpose the film, as if all the blood has been drained out of it.

After Dryden attempts to shoot Bond and discovers that the latter had already emptied the clip, their conversation reaches a climax.

Dryden: How did he die?
James Bond: Your contact? Not well.
[cut to Bond drowning the contact in the restroom sink]
Dryden: Made you feel it, did he? Well, you needn't worry. The second is...
[Bond shoots Dryden]
James Bond: Yes... considerably.

What a textbook way to write a scene; it's so much more effective with the right words left out (e.g., "The second kill is easier....") than leaving all of them in. But Campbell isn't through with us, yet. He cuts back one more time to the restroom, where Bond scoops up a gun off the floor. Suddenly the contact rises, and is then that Bond aims into the famous gun barrel. In seeing Bond's second kill first and his first kill second, it becomes clear that perhaps Quentin Tarantino, who made a highly publicized attempt to direct Casino Royale, had an impact on the movie after all. Cunningly delayed, indeed.

(Coming Soon: Opening Credits Sequence and Act I....)
Posted by Craig at 1:30 PM

Less discussed is whether an almost universally praised movie is even better than its admirers originally believed.

Last night I had "The Searchers" on in the background, with Peter Bogdanovich's commentary playing. He noted his astonishment that when the film first came out it was taken for granted -- just another Ford and Wayne picture. Then he noted the American tendancy to thrust greatness upon artists and their art only after their demise. But he also said this: "time is the best critic."

It's obvious, but true. And I'm looking forward to your appreciations of "Casino Royale," now that you've had time to digest it.

Thanks, I don't know how long this will take. I like the idea of posting during the week until I come home from work, then it rarely seems to happen. But who knows. Stay tuned!

Very cool. I'm really looking forward to the rest of these posts. One of the things I liked so much about Casino Royale was how modular its plot was, which is probably what you're responding to by breaking it up in this way. Most Bond films -- and most modern action films in general, for that matter -- have a single plot throughline that drives the film, and all the action proceeds in a straightforward manner from the initial premise. Not so with this film, which is instead broken down into segments, with the main thrust of the plot subtly shifting with each new segment. I also love how during the lengthy casino sequence, the action essentially takes a break, channeling the suspense instead into the gambling.

That's a great point, Ed. I never thought of it that way before but you're right. It's almost like each segment functions as a building block in the creation of this "new" character.