Shaken and Stirred: A Closer Look at Casino Royale (Act I) 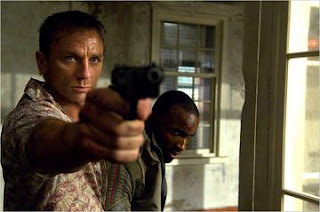 Back to Bond! After a brief hiatus, welcome to Part III of our series.

Responding to the first installment, Ed Howard made the perceptive observation that a distinguishing characteristic of Casino Royale is its modular structure: "Most Bond films....have a single plot throughline that drives the film, and all the action proceeds in a straightforward manner from the initial premise. Not so with this film, which is instead broken down into segments, with the main thrust of the plot subtly shifting with each new segment." This is something that I don't like in some movies, that I shouldn't like in this one, and yet it works like gangbusters. I think this is because Casino Royale is fashioned as an "origins" tale, with each episode serving as a building block in the (re-)shaping of this protagonist, a character who -- as the opening credits allude -- we know and yet don't know very well at all.

Act I expands on this premise, introducing us to most of the supporting players in the film, not least of which the Bond Villain. 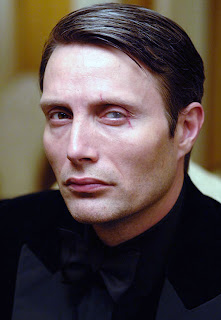 Le Chiffre
Immediately following the credits sequence, the movie proper begins. Switching to vibrant color, Campbell and Meheux treat us to the brisk globe-hopping -- Uganda, Madagascar, London, the Bahamas -- that has always made the series so much fun. (Never mind that some of these locations were filmed elsewhere -- the atmosphere is convincing.) It is in Uganda, our first stop, that we meet the principal villains of the piece: Mr. White (Jesper Christensen); Steven Obanno (Isaach de Bankole); and Le Chiffre (Mads Mikkelsen). All three actors have wonderfully expressive faces (good thing, since it's not exactly clear from the dialogue in this scene what's going on), but it is Mikkelsen's that we focus on, and not just because of his bleeding eye. Le Chiffre, a sponsor of terrorism for monetary rather than ideological value, is an interesting and risky choice for a villain. At first appearances he's a standard Bond heavy, cool and calculating, bent on world domination; but we come to learn that he's much like Bond himself, still finding his footing, somewhere in the middle of the food chain, aspiring to bigger things.

To one who hasn't read the book, what happens to Le Chiffre over the course of the plot is a surprise. (Not least of which his inhaler, of which much is made early on, yet nothing comes of it.) It's an important bit of deception to divert our attention to him -- and later on to his henchman Dimitrios (Simon Abkarian), who is dispatched surprisingly early -- and keep Mr. White on the sidelines. Le Chiffre isn't one of the all-time great Bond baddies, but Mikkelsen oozes charisma, menace, and ultimately vulnerability. Compared to the weenie in Quantum of Solace he's more than formidable. 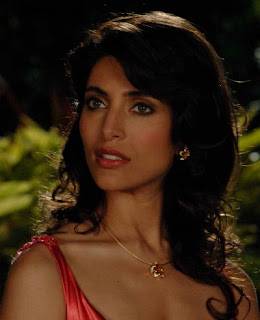 The Good Bad Girl
Roger Ebert has noted that the female sex in the Bond franchise boils down to two archetypes -- The Good Bad Girl and The Bad Good Girl. The former is a bad girl who is actually good, while the latter is a good girl who is actually bad. We meet The Good Bad Girl first in Casino Royale, when Bond arrives in the Bahamas. Solange (Caterina Murino), a leggy, dark-skinned beauty whom he first spies riding a horse on the beach, is a "bad" girl only by association of her marriage to Dimitrios. After winning Dimitrios' car in a hotel poker game, Bond has a witty seduction scene where he picks up Solange for a drink and drives in a circle back to the hotel.

Bond is using Solange solely for information -- in other surprising twist, he doesn't even sleep with her but departs after she informs him of her husband's trip to Miami. The character's appearance is fleeting, but Murino makes enough of an impression that her demise has real pathos, an unusual feeling in a Bond movie.

Action Scenes
A pair of action sequences -- both sensational -- fill the bulk of Act I.

The second one, which I will discuss first, follows Bond from his dalliance with Solange to the airport, where he kills Dimitrios only to deal with the latter's associate, another terrorist who plans to blow up a new massive airplane being unveiled. (Le Chiffre plans on making millions off its stock collapse.) It's an exciting set-piece with a ghastly funny climax, a bomb detonation given an unexpected twist. Moreover, as the baton passes from one bad guy to another, the sequence further prepares us for the story's unpredictable modularity, and makes even the major villains expendable.

But it's the first action scene, set in Madagascar, that is one of the all-time Bond classics. A chase on foot between Bond and an amazingly agile bombmaker (Sebastien Foucan) that begins in a fight pit (between a cobra and a mongoose) and ends at an embassy, this sequence is noteworthy for a couple of reasons. First, as the pursuit goes into a construction site, then with dizzying vertically scales above it, it becomes a vivid reminder of how exhilarating real stuntwork can be. (A terrific New Yorker piece describes in detail the parkour of this set-piece.) Second, the scene tells us more about Bond -- his determination, resourcefulness, and bull-headed obstinacy. (There's a priceless contrast between Foucan's effortless gliding and Daniel Craig's crashing through walls.)

It's a marvelous piece of character development between a pair whom M (Judi Dench) sums up afterward as, respectably, a "gun-for-hire" and a "blunt instrument." And it reinforces a theme of the film that will be brought to the fore: Can a killer maintain his humanity?

Coming Soon: beautiful Montenegro; high-stakes poker; and the Bad Good Girl -- all in Act II....
Posted by Craig at 2:33 PM