Shaken and Stirred: A Closer Look at Casino Royale (Opening Credits and Theme) 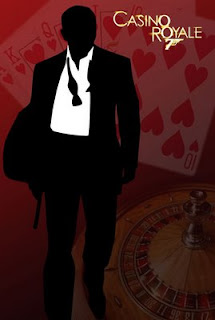 Welcome to Part II of our series. Originally I'd intended to analyze the opening credits and Act I together, but I'm putting off the latter for next time. That leaves us with, um, the credits....an entire post, really? Absolutely, when the sequence is as justifiably famous as the Bond series' has always been, and when it conveys information as skillfully as the one in Casino Royale.

Perhaps a reader with a better sense of Bond lore can either confirm or correct me, but I believe the first true credit sequence in the franchise began with Goldfinger. At the least, that's the one everybody remembers. The splashy 60s animation, the dancing girls, the pop hit -- Goldfinger had all the elements that have been staples ever since. Most of them blur together or else have been forgettable, the exceptions being "You Only Live Twice" and "For Your Eyes Only," songs more memorable that the movies they precede.

You Know My Name
For all the many theme songs in Bond history, nearly all of them revolve around a basic motif -- living, or dying, or living and dying, or living let dying, or dying let living. Casino Royale's theme, sung by Chris Cornell and appropriately titled "You Know My Name," is a pretty good one, not quite great (it loses me during the bridge) but better than the Alicia Keys atrocity that kicks off Quantum of Solace. The lyrics by Cornell and composer David Arnold are no great shakes (though I do like the verse "I've seen this diamond cut through harder men"), but the melody has a drive and focus to match Daniel Craig's James Bond, to whom we've recently been introduced in the startling prologue. And the song is enhanced considerably by the visuals of this sequence, which do more than tell us the names of the people who made the picture; they also tell a story. 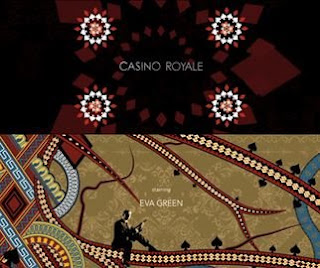 Recurring ingeniously throughout Casino Royale is a mix of the old and the new. In the prologue, Campbell subverted our expectations by delaying the reveal of that iconic gun barrel, so that when it finally came -- within the narrative rather than disjointedly at the start of it -- the image was exhilarating. This blending and subverting continues through the opening credits, which features the expected animation but no dancing girls. Instead, we get a pair of simple visual motifs -- playing cards and crosshairs -- that are repeated with increasingly invention and complexity. These are, of course, the two sides of James Bond: the sophisticate and the killer, both of which will be on display in Casino Royale, both of which Bond will need to survive. Yet it's the violence that's emphasized here, as the cards are used as weapons, like Chinese throwing stars, at one point lodging into the torsos of animated bad guys as cartoon blood oozes out of the wounds.

There are too many striking visuals in this three-minute sequence to mention. My favorite -- blink and you'll miss it -- occurs when a pair of crosshairs casually glides over the Queen of Spades to almost subliminally reveal the face of Eva Green (who will become known to us later in the film as Vesper Lynd -- or, as Roger Ebert would call her, "The Bad Good Girl"). But narratively the most important moment occurs when a pair of bullet holes hit a 7-card that morphs into a computer screen informing us: "007 status confirmed," thereby saving us an entire scene of exposition.

And what about Daniel Craig? He's omnipresent in this sequence too -- or rather more "omni" than "present." Campbell introduces this Bond while resisting telling us everything about him right away. By ending the sequence with Craig's blond visage fading in and out of a dark silhouette (the final image has the top and bottom of Bond's face wittily darkened to resemble a ninja), the filmmakers are underlining the song's meaning more than the lyrics: We know his name, but this Bond still has to earn our respect. He's going to discover who he is, as will we.

The title credit sequence is an important part of what makes a Bond movie a Bond movie and I agree that these opening credits in Casino Royale are a fascinating blend of old and new. The way they uphold this long-standing Bond tradition (a visual language that goes back to 1962) but also manage to avoid feeling dated is a real design accomplishment.

You're right about all the staples being there--they stuck to the main traditional features: animated abstract shapes, silhouettes of people, shooting guns, numbers, and titles that interact with the images—with swirling and flowing movements of all these elements alternating with pauses where everything holds relatively still (there is a distinct style to how this is paced and the speed of it), and, of course, the required gun barrel sequence which is the real brand label on a Bond film.

But the title credits in Casino Royale also incorporate more complex colors (and they are less garish than the old Technicolors) and more detailed and complicated graphics that seem vaguely Indonesian and globally exotic. The overall effect is less psychedelic , less sensual, and more cerebral with interesting visual puns like the gunshots making the “00” of 007 that you mentioned, and also the crosshairs turning into roulette wheels and the engraved filigree designs from money and playing cards intertwining across the screen like invasive vines. And the detail that you point out about the fleeting glimpse of Vesper Lynd's face is the thing that adds a whole new dimension. There’s also a longer view of Bond’s face at the very end of the title credits—and both views of faces focus on their eyes with a definite sense of presence and intelligence behind these eyes. The credits are no longer mainly populated by shapely, superficial, and anonymous silhouettes, but now there are also glimpses of distinct, individual minds and personalities.

Your artistic analysis is terrific and goes a long way toward explaining why I like the credits sequence so much. The fleeting glimpse of Vesper is especially fascinating. It occurs about halfway into the credits, just as Vesper shows up halfway into the movie. And the tease underscores what an enigmatic character she is -- indeed, the more we see of her throughout the movie, the less knowable she seems to become. The opposite of Bond, as you mentioned, who, as the visual language of this sequence indicates, is an icon about to be filled in by a real human being.

I hadn't thought as much about these differences in how we see the two faces in the title credits. For Vesper Lynd, it is a momentary fleeting glimpse, the briefest possible of teases, a sneak preview of how this character will be for us. With Bond, we get a longer, more solid view before his face reverts, bit by bit (and his eyes are the last to go), to silhouette. Your point about the tension between Bond the icon and Bond the person is very apt (and is a theme that grew in Fleming's books as he wrote the series) and the title credits convey this visually very concisely.

Excellent article, I appreciate your point of view for your help, and I wish you good day the pleasure of reading your future articles.
Thanks.