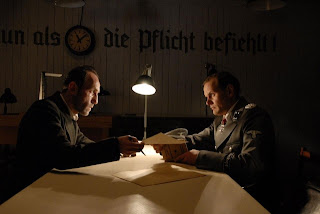 Apologies for the delay on my Casino Royale series. Real-world items have intruded the last couple weeks, and not in an unpleasant way, but enough to divert my energies from obsessively cataloging the vast array of Casino-isms. Will return to the fun soon.

For now, a palette-cleanser on a pair of highly praised recent films I've finally caught up with. First, The Counterfeiters (2007), the true-story Best Foreign Film from last year's Academy Awards may, at a glance, fulfill Spike Lee's famous axiom (I'm paraphrasing): "About the Holocaust -- win the Oscar." It's a different spin on the topic though, a cross between The Lives of Others and Schindler's List starring Karl Markovics (who resembles Lives's Uhrich Muhe in both physicality and temperament) as Salomon Sorowitsch, an expert forger of passports and currency in 1930s Germany who is arrested by an unusually avuncular SS officer by the name of Herzog (Devid Striesow, doing a nifty Claude Rains) and tossed in the concentration camps. Sally -- as Sorowitsch prefers to go by -- is a career white-collar criminal with palpable contempt for his Jewish heritage. ("You know why Jews are hated?" he asks early on. "Because they refuse to adapt; it's not that hard.") Cunningly he rises through the camps by playing the sycophant, painting florid portraits of his commandants until he is recruited by Herzog to lead a massive counterfeiting operation on behalf of the Nazi war effort.

This is a great story for a movie, and The Counterfeiters is terrific for about three-quarters of the way. The relationship between Sally and Herzog has more than a few echoes of Rick and Renault in Casablanca, a pair of cynical crooks who eschew violence and ideology for self-preservation. Cinematically, I've complained about hand-held cameras in the recent past, but here we have a director, Stefan Ruzowitzky, who knows how to use them, with unobtrusive Altmanesque zooms and creating an overall atmosphere of immediacy.

Ruzowitzky also understands when to keep the camera still, and some of the best scenes in The Counterfeiters show Sally and his team sitting quietly in the sunshine, enjoying privileges that their brethren lack. The filmmakers skillfully imply that another kind of Holocaust film -- the kind we're more accustomed to -- is happening right behind the walls and across the fences of the concentration camp, and as the Nazi regime crumbles the stakes get raised as to whether the best chance for survival is by helping or hindering Herzog's scheme. Another major character, a stubborn Marxist ideologue named Burger (August Diehl), spends the last act sabotaging efforts to produce a successful counterfeit dollar, and the movie bogs down a bit with Sally's contrived conversion to Burger's perspective. (Not akin to Liam Neeson's "I could have done more" eye-roller at the end of Schindler's List, but jarring all the same.) Diehl gives Burger validity and dignity; but what sticks with me about The Counterfeiters are the moments that ring both odd and true, as when Herzog attempts to inspire motivation by giving his prisoners a ping-pong table. I'm sympathetic to Stuart Klawans' suggestion of a moratorium on Holocaust cinema, but scenes like this one show that there's still life in a subject so filled with death. 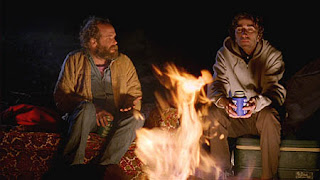 Subtitlitis notwithstanding, American audiences would probably find The Counterfeiters infinitely more accessible than the acclaimed American indie Old Joy (2006), which I checked out partly because of an interest in the director Kelly Reichardt's newest film, the Michelle Williams/labrador retriever saga Wendy and Lucy. James Wolcott has also lavished praise on Old Joy as "a marvel of Hemingway/Carver iceberg-tip unspoken implication where the emotion seeps through the minimalism and produces an epiphany muffled in enigma." Heady stuff for a camping trip that climaxes with a back rub.

Confession: while I'm not averse to minimalist moviemaking with obscure intentions, I do find I need a degree of accessibility to fully engage with a narrative -- The Station Agent comes to mind. On the surface, Old Joy carries a whiff of familiarity: a pair of buddies (Daniel London and Will Oldham) mull over their estranged friendship on a weekend hike through the woods. It's the kind of movie that draws praise for Leaving Things Unsaid, but for me Reichardt shows a knack for opening up the wrong spaces, removing us from the central relationship while overstating the sociopolitical environment with "Air America" radio broadcasts (somewhat reminiscent of the narration in Y Tu Mama Tambien, only without the deadpan satirical edge). Old Joy isn't pretentious; it's best moments are sharply observed vignettes between two men on diverging paths -- as when the bearded Oldham, playing an aging hippie vagabond, notes how there are trees in the city and trash in the woods. He has a nice rapport with the soft-spoken London, who conveys his character's grounded decency along with a lingering sense that he feels like a sell-out.

Overall though, Old Joy is maddeningly remote, not least of which the aforementioned massage with all its cosmic implications, which I think add up to less than what has been speculated. I know I'm supposed to marvel at the exquisitely timed moment when Reichardt cuts away from the tension to scenic images of lush foliage and a flowing river; but all I could see was a director tripping over her own symbolism, and found myself half-expecting/half-hoping for a shot of a train barreling through a tunnel a la The Lady Eve.
Posted by Craig at 3:15 PM