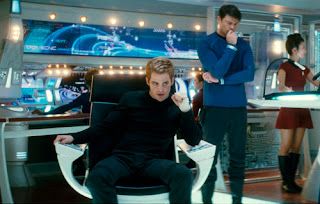 So we have a young hero who never knew his father, a mad-dog villain who prefers black, a saloon with an interplanetary clientele, an ice planet with killer beasties, an out-of-nowhere last-minute appearance by the good guys' starship to save the day, and a lavish medal ceremony to wrap things up. Is it just me, or is this remake of the Star Wars Trek franchise a tad on the nose?

Actually, J. J. Abrams has more going for him than George Lucas nowadays -- namely a refreshing interest in human beings, or at least those who look like supermodels. (All the better to further the human race.) Like Joss Whedon, he has a knack for both character and story, for summing up an individual or a situation with as little exposition as possible; and these traits work fairly well for at least the first act of the new Star Trek, when we meet icons Kirk (Chris Pine), Spock (Zachary Quinto), McCoy (Karl Urban), Sulu (John Cho), and Chekov (Anton Yelchin) in younger, greener days. The workable screenplay, by Robert Orci & Alex Kurtzman (who wrote several Alias episodes together), sets up the impulsive Kirk and hyperrational Spock as rivals who become friends; and Pine and Quinto play their roles with enjoyable relish, particularly in the film's funniest scene, when Kirk shrugs off a simulated attack scenario designed by Spock to scare him.

There is, unfortunately, an excess of silliness here and there (e.g., Kirk's allergic reaction to one of McCoy's injections), and a misguided insecurity about holding still long enough for anything to register. The Shatnerfied Star Trek tipped so far into contemplative inertia I'm not sure I ever sat through an entire episode. (My grad-school roommate was a fan of Next Generation and so I probably watched most of its episodes, finding them a mix of the diverting and the doldrums.) This is the ADD version, shot on slash-and-blur digital video, and the action scenes suffer as a result.

But the most consequential aspect of Abrams' style is, unlike Whedon, he falls short in striving for myth. The mind-bending plot involves an obligatory black hole from which the Romulan heavy (Eric Bana, resembling his breakout role in Chopper but still a vortex of charisma) proceeds to wreak havoc on the natural order of history. This alternate-reality scenario produces a few tingles (as when a familiar face from the original series appears), and the performers -- including the arrival of the great comic actor Simon Pegg as Scotty -- are ready for bear. But the movie gets balled up with too much busy-ness, the filmmakers botch some potentially resonant parallels (shouldn't it be Kirk the Younger attempting to collide with the Romulan ship, as did his father, rather than Spock?), and like this season's finale of Lost (a show Abrams created, though is no longer affiliated with), Star Trek finally loses its fizz.

Abrams has the mojo of a gifted director, and for the most part I liked his light touch (not to mention the sensation of leaving the theater under two hours). The "Rule of Sequels," however, poses a need for more -- not, God forbid, less.  It will be interesting to see where the new series take these characters, if this young troupe's range will be allowed to expand along with their paunch, and if together they come to understand that going boldly does mean going where Roddenberry, Lucas and others haven't gone before.
Posted by Craig at 10:16 AM

*sigh* Can't you just go to the movies, and enjoy the ride? Overall, I found the movie fun. The bit on the ice planet was sort of lame, but I think they needed an opening for a character. I realize that I may like this movie more than I should as I loved Wrath of Khan as a kid. The two movies parallel each other pretty well w/o being identical.

Considering this is essentially "Star Trek: The WB Generation" (or CW or whatever it's now called), I'm surprised I enjoyed it as much as I did. It's relatively fun overall and didn't leave me exhausted with a headache like most summer blockbuster fare -- including last year's "Iron Man." I just think they missed some opportunities and added some nonsensical moments. Jason B. has already pointed out the needless (and idiotic) scene with Scotty beaming into the water tank. That's an example of what I meant by too much "busy-ness" at the screenplay level; filmmakers these days always think they must have constant action or "suspense," when it just comes off silly and enervating. I don't remember a lot about "Wrath of Khan," but I do seem to recall a few quiet character-driven moments that offset the action and heightened the big dramatic scenes.

I'm with Mary, it was mostly a lot of fun to watch and I agree that the ice planet monster was lame--but lame in kind of a campy way that reminded me of the original TV series. I thought it was fun to go back in time, to an alternate-universe prequel, to this group of familiar characters that now seem a little smarter, younger, cooler, and better looking than I remember the original guys being. It was fun.

Did the "Star Wars" stuff bother anyone else, though? It's one thing to pilfer from your own franchise, but comes across somewhat desperate to do it from a rival one. (There's even an exploding planet, for chrissakes.) Granted, it's done much more adeptly than "Quantum of Solace"'s hackwork facsimile of the "Bourne" movies; "Star Trek" is, we all agree, in varying degrees, fun. Yet we only need look at "Quantum"'s predecessor, the great "Casino Royale" -- which returned Bond to his roots, while also offering something new -- for proof that a movie can be fun and heartfelt and mythic all at once.

Craig: Good review. Last part first: The Star Wars stuff didn't bother me. In fact, it didn't even really register with me. And I grew up on Star Wars. So I think that's a credit to how much these characters reminded me of early Star Trek.

"This is the ADD version."

I think that applies to 99% of blockbusters these days. So unfortunate.

That scene where Scotty accidentally beams inside the tank (or whatever) is hilarious...at first, when all he does is knock on the metal walls. But, of course, the Abrams crew couldn't stop the scene there. Not when we could take the opportunity for some pointless, flat CGI.

(Note: I'll never believe that the water-tube episode or the ice planet monsters were written into the original draft of the screenplay. The scenes feel like inserts...because that's what they are.)

(Note: I'll never believe that the water-tube episode or the ice planet monsters were written into the original draft of the screenplay. The scenes feel like inserts...because that's what they are.)It's kind of interesting in that this reminded me of listening to the director's commentary on "Fellowship of the Ring" (actually not just Jackson but his wife/screenwriter and the other screenwriter too). During the scene before the Fellowship enters the dwarf mines (or whatever they're formally called), when Frodo gets attacked by an octopus/squid creature, PJ and his cohorts babble about how yeah, you gotta have an action scene here, you gotta have an incident, you gotta have it! And all I remember thinking is how pointless and unnecessary the sequence is, that they should just go into the mines already, where plenty of incident awaits. (This piling-on only got worse with their "King Kong" remake.)

So, yes, I agree, those scenes in "Star Trek" feel like inserts. (Anthony Lane even speculated the giant crustacean was a reject from "Cloverfield," and he may be right.) But a surprising number of screenwriters do seem to truly believe these things are necessary, and insert them at the draft stage.

I did think that the Kansas-space-outpost-intergalactic-diversity bar scene was at least a reference to Star Wars. And the other thing that stuck out was Scotty's cute nonverbal friend who seemed a little bit too much like Chewbacca. These two elements felt out of place because I agree with Jason Bellamy, most of the movie was close to the spirit of the old Star Trek TV series, the characters, and their relationships.