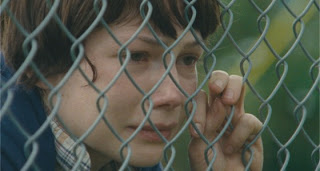 Kelly Reichardt's Wendy and Lucy continues her hushed travelogues-of-despair set in Oregon, and I'm not without sympathy to Washington-based N.P. Thompson's weariness at seeing his beloved Pacific Northwest depicted repeatedly onscreen as "flat, banal and desiccated." (Hilariously, he describes the director as "borrowing liberally from.... the 'cinematic language' of Gus Van Sant, which is rather like Robin Hood stealing from the poor to give to the poor.") Nevertheless, this is Reichardt's party and she can cry if she wants to -- though, for better or worse, she's not the kind of filmmaker who wallows in overt emotion. Her protagonist, Wendy (Michelle Williams), is a twentysomething drifter whose car stalls in a small Oregon town while en route to Alaska, where she hopes to make some money. Getting caught shoplifting a few cans of Iams for her labrador retriever, Lucy, she's temporarily thrown in the slammer, then spends the rest of the film looking for her missing dog.
There's a lot that bugs me about Reichardt. She's unsubtly subtle, like a dissertation writer who narows the margins to pack tighter the text. All that blank space doesn't open up her ideas; they just crowd you, not allowing you room to think or her stories to breathe. Yet I'll be damned if Wendy and Lucy didn't get to me anyway, or more precisely Williams did. She's an actress who has snuck up on me in recent years, in works as varied as The Station Agent, Brokeback Mountain, and I'm Not There; and her versatility continues to shine here. Bereft of backstory, Williams still makes it clear that Wendy is damaged goods. She fills in the emotional gaps that Reichardt is too highbrow (or sloppy) to bother with -- namely, that it's Wendy's bond with Lucy that keeps her going, that brings out her resilience, that she loves and cares for her dog more than herself. Reichardt shows evidence of a good eye (the final passages of the film are visually haunting); and I admire her willingness to address a subject (economic despair) that few filmmakers bother with. I just wish she'd learn to do it without memorizing pages from the Indie Filmmakers Playbook. It's okay to give your audience something tangible to connect with now and then; there's no need to be coy. 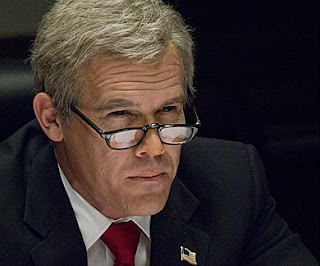 Were Kelly Reichardt to suddenly sign on to direct Transformers 3, it wouldn't be half as surprising for some as Oliver Stone's approach to W., his quasi-biopic about now-former President George W. Bush. Those bracing for (or anticipating) a high-octane multimedia hatchet-job were taken aback by the straightforward setups, the deeply intimate, seemingly sympathetic approach. Was this some kind of joke? In a way, yes. David Denby griped that the movie would have worked only if played as satirical comedy; but a comedy is what Stone has made, albeit a deadpan and quietly mournful one. It's right there in Condi Rice's subliminal whisperings in Tony Blair's ear to persuade the Prime Minister to support the war; in the brilliant insert of a corncob that Dubya steps on just before meeting Laura at a Texas cookout; during the war-cabinet walk on Bush's ranch that leads itself astray. In other moments, like Dick Cheney's semi-persuasive monologue on the need for invasion, the picture becomes deeply disquieting.
Stone still has his share of dumb ideas (dream sequences, fantasy scenes), as well as the usual Daddy Issues that are, I suspect, his point-of-entry into this story. The combatively affectionate relationship between Bush Jr. and Sr. is predictable though well-played by Josh Brolin and James Cromwell. But Stone's smartest move was taking seriously Bush's religious convictions, proving that he understands what Pauline Kael once wrote about genuine fanatics being far more unsettling than charlatans. Stone visualizes this in striking ways -- the halo of light over Dubya's head as he prays in the war room on the eve of battle, or the series of closeups starting from Dubya's eye to the eye of a painting of Christ to finally tracking out of Bush Sr.'s iris. (The connection between [lower-case] father, son and spirit is complete in this stunningly edited sequence). Working with a tight budget, this is some of the best filmmaking of his career. And his way with actors remains inspired, similar to what Denby recently wrote about Hollywood Golden Age director Victor Fleming: that he "located and enlarged a set of defining traits -- a strain of feeling or humor -- in whomever he was working with." Brolin may be a boorish oaf in real life (run, Diane, run!) but onscreen -- unlike, say, Tim Robbins -- he conveys the dignity of even the most disreputable characters. Similarly, we see Thandie Newton's witty daring as Rice, Scott Glenn's cocky bravado as Rumsfeld, Toby Jones's smooth cunning as Karl Rove. Richard Dreyfuss claimed that Stone was a fascist on the set and I've no reason to doubt him (from what I hear, Dreyfuss is no peach himself), but as Cheney he gives his finest performance in years.
As one of W.'s few admirers when it was released last Fall, I think the film looks even stronger on a second viewing, with the anxiety of the previous election behind us. Free of overheated rhetoric, and as mischievously unassuming as that red-dot period after the capital letter in the title (which the director said, with a chuckle, that he included to imply "danger"), Stone's film is a critical glimpse at a controversial figure that, despite its notoriously inarticulate subject, invites rather than discourages conversation.
Posted by Craig at 4:00 PM

Calling Reichardt "unsubtly subtle" is great. Along those lines, I find her to be too calculatedly precious and not willing to just be. That irriates me.

As you rightly said, Wendy and Lucy, and Old Joy, are films that need to breathe, even if they are about tension in their most dramatic moments.

Yeah, I think I even gave this too much credit -- Ed Copeland's blisterlingly great review is more on the money, comparing "Wendy and Lucy" unfavorably to "Into the Wild," which, whatever its flaws, had E. Hirsch to meet all kinds of people, many of them interesting and generous. Reichardt is too busy stacking the deck against Wendy to allow that kind of expansiveness into her worldview. She uses fringe characters only to draw out their pettiness, even making the kindly security guard look stupid by having him give Wendy what looks like a wad of cash that turns out to be six dollars. Why? If she's commenting on the character's poverty, why not just have him say, "This isn't much, but I'd like you to have it," instead of having him make a big show like it's a king's ransom. Gah, what a stupid movie.

Thanks for your kind words about my review Craig. As I mentioned, what really bugged me above all was her relationship with her co-star, Lucy. How good a job could she have been doing at taking care of the dog that she doesn't realize that the bag of dry food is practically empty? Poor Lucy still loves her anyway and *SPOILER*

I swear you get more of a performance out of her in the final scenes even though it's though it's the only time Wendy is doing the right thing and Lucy looks sad, not realizing she'll be better off.