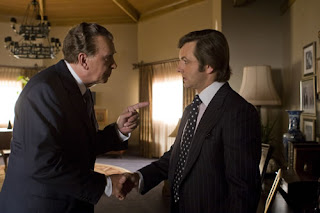 Every Ron Howard movie, it's always the same. Thirty minutes in, I say to myself, "Gee, this isn't so bad"; followed an hour later by, "Lordy, this sucks." Call it consistency, the same holds true whether it's one of his hollow blockbusters or tony Oscar contenders -- such as, in the second instance, last year's Frost/Nixon. Based on Peter Morgan's acclaimed play and starring the same duo who appeared in it (Michael Sheen as David Frost, Frank Langella as Tricky Dick), at first the historical authenticity of the story appears to do for Howard what Apollo 13 accomplished -- to rein in his oft-misguided impulses to pump up the drama rather than let the narrative speak for itself. Morgan, also the highly regarded screenwriter (if less so by me) of The Last King of Scotland and The Queen, adapted his play here; and he once again proves himself to be an expert at plot structure and understanding of the different needs between stage and screen.

Where I part ways with Morgan lies in what has become his specialty -- picking a marginally interesting historical anecdote and magnifying it beyond its due. Frost/Nixon chronicles the series of interviews in 1977 between a callow British talk-show host whose fame had passed and a recent American President who had resigned in disgrace, and the discussions offered their viewership some revealing moments of character nonetheless hardly shocking in terms of the facts behind the topics (Vietnam, Watergate, et al). Howard must have sensed this, which explains why hoary cliches begin popping up like welts within what is presented as docudrama. I had a moment's pause when it became evident that the remarkable Rebecca Hall (Vicky Cristina Barcelona) would be given nothing to do as Frost's eye-candy love interest. Then Sam Rockwell comes barnstorming in as the American journalist -- and one of Frost's researchers -- James Reston, Jr., who lets it be known off the bat that he really hates Nixon and reminds us of this over and over again. (This suits Rockwell, whose acting style is to wrap himself around one tic and squeeze it dry.)
But the real kicker is that Howard, perhaps still unable to let go of all those Oscars he expected for Cinderella Man, ultimately frames Morgan's verbal tete-a-tete as a heavyweight title bout between two underdogs, with Rockwell and Oliver Platt (amusing but underused as always) in Frost's corner and Kevin Bacon's hardcore conservative Jack Brennan advising his fallen president. Sheen barely registers as Frost, while Langella has some fun with Nixon's pettiness and cunning but isn't nearly as imaginative as Anthony Hopkins in Nixon or as hilarious as Dan Hedaya in Dick.
I keep wishing Ron Howard will decide to direct the upcoming Arrested Development movie (he served as executive producer and narrator for the TV series); prior to Apollo 13, his two best films were Splash and Night Shift, a pair of light and charming comedies that prove Howard once had a sure touch. Frost/Nixon moves faster and is more involving than the near-coma-inducing Da Vinci Code, yet it's every bit as impersonal. Even my hopes that this time the director would be forced to avoid his usual string of anticlimaxes (as if, unable to decide between six different endings, he shoots all of them) were dashed by an abysmal coda that I'll bet was nowhere near Morgan's original play or script. "The movie needs a more upbeat ending!" I can hear a studio head barking during a story conference. "The movie needs closure!" And then I envision Howard nodding his head, taking notes diligently. Perhaps because he's a nice guy. Or because, as a child of Hollywood, it's the only language he understands.

I won't waste much energy panning Body of Lies, since it's evident that Ridley Scott barely spent any making it. What has happened to this once cutting-edge filmmaker to make his work come close to resembling the glossy oeuvre of his hack brother Tony? Even baby bro' made Spy Game -- a somewhat similar yet better movie than this one, with a surprisingly spry Robert Redford as opposed to a 'tater-talkin' Russell Crowe -- whereas Ridley demonstrates here he's as clueless about terrorism as the heroin trade in his previous, hideous American Gangster. Scott's underrated Kingdom of Heaven had a keener understanding of the complexities between the West and Middle East; and although Orlando Bloom was typically mocked for his lead performance as a crusading knight in that picture, Leonardo DiCaprio is considerably less convincing as a hard-boiled CIA agent in Lies. There's still something playacting about DiCaprio that all his hard work, scruffy beards and furrowed brows can't yet conceal. He huffs and puffs and dashes into public squares with guns-a-blazin', while Crowe, as his handler back in the States, drawls lazily and barely lifts a finger. (Crowe and Scott must enjoy working together, considering how mediocre their collaborations have been. I'm mixed about their next feature, Robin Hood: tired of the subject matter, yet intrigued that it seems to have a middle-aged spin, like Richard Lester's 1976 Robin and Marian with Sean Connery and Audrey Hepburn. In the age of Tiger Beat Star Trek, that's a ballsy move.) DiCaprio and Crowe cancel each other out, leaving Mark Strong, as the obligatory morally ambiguous Jordanian security chief who leaves you guessing (but not really) as to where his sympathies lie, as the only performer who makes an impression.
Despite its feints for topicality, Body of Lies is, like Frost/Nixon, most comfortable in the realm of cliche. It's the kind of movie where the hero's girl is kidnapped, then said hero is tortured gruesomely, but not nearly as gruesomely as he would be in real life, then the villain sneers "Do you think the cavalry is going to arrive in time to save you?" five minutes before they do exactly that. All great filmmakers have their misfires, but Ridley the Visionary (Blade Runner, Alien) and even Ridley the Idiosyncratic (Thelma & Louise, Matchstick Men) has become something I'd have once thought impossible: Ridley the Irrelevant.
Posted by Craig at 9:22 PM

You're catching on to this blogging bizness fast, JD.