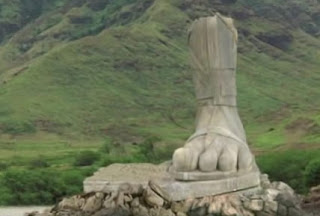 I'm not sure whether I agree that one shot can ruin an entire movie, but certainly one bad scene is enough to spoil the fun. On the season finale of Lost, the moment came when Jack (Matthew Fox) tells Sawyer (Josh Holloway) that his reason for wanting to detonate a hydrogen bomb on the island -- which will theoretically stop "the incident" that will cause their plane to crash on the island and thereby change the future -- is so he can have a fresh start with Kate (Evangeline Lilly). Destiny needs to feel inevitable, and after five seasons this potential coupling doesn't even reach the remotely plausible. This piece of nonsense, and the overwrought fisticuffs that followed, seemed to further emphasize the clumsy editing and staging of this two-hour special. The creators of Lost have had a hot-streak with slam-bang season closures of late, and all the pieces seemed in place: Jack guiding his followers to the '77 Dharma test-site; Locke (Terry O'Quinn) leading his group to Jacob's statue in the near-present; with a wild-card team carrying a locker ominously-sized like a casket to the same place. Yet everything seemed off a beat, other than the as-always marvelous work of Holloway and Liz Mitchell, the latter of whom was alloted the explosive climactic moment. Lost, at its best, is still pulpy fun, and there was enough good stuff here to make me look forward to next year's final season. Still, when that nuke detonated and the screen turned to white, my mind couldn't help but drift to the season one climax of a certain 80s cop-spoof, and a voice hollering "Hammer!" 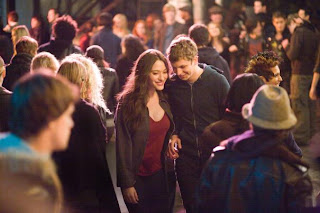 The dud teen comedy Nick & Norah's Infinite Playlist also asks us to believe that its titular characters are meant to be together, but of the two only the raven-haired, preternaturally alert Kat Dennings brings her A-game. She's wonderful as band-groupie Norah; whereas Michael Cera, who has carved out something of a niche with his low-key style, is surprisingly charmless as Nick, a bass player way too distraught over the breakup with his skanky ex-girlfriend. Early in the picture, Nick tells Norah that he doesn't believe in labels, but what you see is all you get with this cast of one-note characters ("gay," "drunk," "skank," etc). Director Peter Sollett is going for one of those classic night-to-remember teen nostalgia comedies in the American Graffiti tradition -- crossed with some Cameron Crowe/Nick Hornby-esque passion for pop music -- and to be sure, his use of New York City settings is imaginative and alive, much more than anyone in the movie. 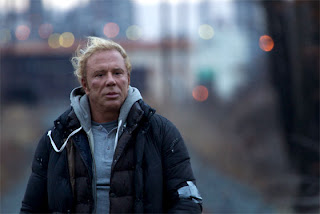 Having missed the theatrical run of The Wrestler, I had plenty of time to read all the accusations about the film's "predictable" plotting even by the many who liked it. All I detected was a keen subversion of the Rocky formula, with Mickey Rourke's Randy "The Ram" Robinson going through the tropes of a comeback marked by an undercurrent of despair. What keeps the despair percolating just below the surface is Rourke's gallows humor and Darren Aronofsky's refreshingly no-frills directing style. I hadn't been able to endure an Aronofsky film from start to finish prior to this one; but here he paints a bleak landscape without wallowing in it. Rourke never wallows. Self-deprecating but never self-pitying, middle-aged yet light on his feet, he hits some of the casual authenticity of Paul Newman's late period. One of the best scenes features a long tracking shot following Randy to a dismal job at a deli counter, with the faint sound of a cheering crowd from his wrestling career on the soundtrack. Those cheers become for real in the final go-for-it match, interpreted by some as a vindication of Randy's choices. Yet I remain haunted by the closing image, which seems less a leap into victory than death.
Posted by Craig at 10:37 AM

I keep wondering why so many commenters seem to think Jack was looking for a second chance with Kate. In fact he was looking to wipe her out of his life, and to have her sent back to jail, all as petty revenge because he couldn't have her.

Agree with you on the godawful writing though. It's a shame how crappy romances, in particular the nonsense with Jack and Kate, have been allowed to torpedo a once brilliantly plotted show.

I thought the Lost finale was mostly great, but I don't get why the writers seem to think people still care about Jack & Kate as a couple or potential couple. NO ONE CARES. I care way more about Sawyer and Juliet, who didn't even exist as a potential couple until this season and who developed more romantic chemistry in a few episodes than Jack & Kate have worked up in 5 seasons. It helps that Juliet's an actual great character, and I hope she hasn't been killed off for good here...

Anon, I prefer your interpretation to mine, and it would certainly be more plausible. But didn't Jack say something to the effect that he wanted another chance with Kate, which prompted Sawyer to speak the obvious: "Hell, she's standing right over there!" I'm with Sepinwall that Jack's motives are far more plausible when they tie into his messiah complex. Matt Fox connects better with the essence of this that's inside him than with any other performers onscreen.

The creators of this show are unusually canny (they'd have to be to hold our interest for as long as they have); but like Ed said, they seem hellbent on proving Jack and Kate are Meant To Be Together, and that's just making their audience all the more resistant.