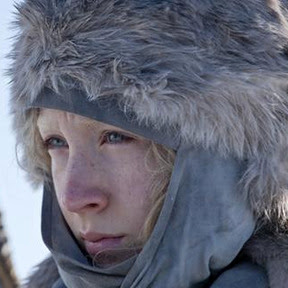 Joe Wright, the director of Hanna, is a couple of tweaks away from being a good filmmaker. From adaptations of Jane Austen (Pride & Prejudice) and Ian McEwan (Atonement) to disease-of-the-week actor showcases (The Soloist) and now an arty Euro-thriller, Wright shows he's attuned to both the human elements and technical aspects of cinema. He's eager to prove he's not a hack, and that's precisely his problem: an efficient craftsman would have a keener understanding of how narrative and physical space go together, offer the audience the pleasures inherent in their intersection.
Consider the opening movement of Hanna: in an undisclosed wintry location, an adolescent girl (Saoirse Ronan) shoots a deer with a bow-and-arrow; is ambushed from behind by an older man named Erik (Eric Bana) who appears to be either her father or her mentor or both; expresses a desire to see the world; presses a red button on a device dug out of the snow by Erik that effectively sets the plot in motion. For about fifteen minutes, Wright (working with a script by Seth Lochhead and David Farr) builds things gradually, organically, without fretting over pacing or spelling things out. Then, as though checking his watch and exclaiming, "Oh, shit!", the director shifts into overdrive. His first mistake comes after Hanna hits the button, with an immediate cut to the girl's soon-to-be archnemesis Marissa Wiegler (Cate Blanchett) and a subsequent scene featuring the latter's bevy of intelligence operatives staring at their computer screens, zeroing in on Hanna and Erik's location. It would have been more effective to stick with Hanna's limited point-of-view for a few minutes longer, more terrifying when a team of Wiegler's agents storm the cabin at nightfall. Instead of thinking about where he's cutting and why, Wright forges ahead with the Chemical Brothers blasting on the soundtrack, substituting artificial momentum for the real thing.
Other than cheap effect, this choice of music -- which pounds on the soundtrack over and over again -- means nothing, makes no underlying connection with the main character even though she says, early on, that she's curious about what music sounds like. Hanna's alien-like responses to everyday human behavior and modern technology would seem like easy laughs, but other than a blunt explanation to the question of how her mother died ("With three bullets"), Wright isn't interested in humor. He seems to think that the absurdity of the premise warrants a dreadfully serious approach, rather than pausing to consider that embracing the absurdity might draw the audience into the story.

With overt nods to the Brothers Grimm, Hanna lurches toward myth; but its characters are too banal to engage our emotions on an operatic level. Now seventeen, the feral young Ronan continues to be a strangely affecting screen presence; here, as a teenage assassin, she's plausibly out-of-control of her own physicality. But the filmmakers isolate her too long from Bana and Blanchett, when their dysfunctional "family" (of a sort) should be the connective tissue that holds the movie together. Not that Eric Bana has ever been effective at conveying feeling, and appears to be reprising his character from Munich. As for Blanchett, it should be said that I've always liked her more for who she appears to be off-screen than her performances on-. (Her sheepish "I'm sorry" grimace to the camera following an Oscar clip of her histrionic performance in Elizabeth: The Golden Age was particularly winning.) For Wiegler, she chews on a Texas drawl and, unlike her villain in the last Indiana Jones picture, actually gets to kill a few people. Yet the character, either from Blanchett's choices or problems within the script, is confused, her maternal fixation on Hanna too muted. Following Hanna's bloody escape from a holding cell (which Wiegler witnesses), one would think Wiegler's interest would be piqued. Why, then, does she redirect her energies into tracking down Bana's Erik, leaving Hanna to her fey sidekick Isaacs (Tom Hollander, a Wright favorite, giving the film a few glimmers of comic spark)? Isaacs, toting a crowbar and wearing short-shorts, leads a trio of German killers who resemble The Nihilists from The Big Lebowski, so it's puzzling that Hanna is unable to dispatch them as quickly as she did earlier with fully armored guards. More fatal than lack of internal consistency, however, is the lack of connection between Hanna and Wiegler: without any, their final confrontation means nothing.
Hanna is the latest in a line of mediocre action flicks to receive good reviews, and to be fair, if, like most critics, I had to see all the truly terrible ones, I too might fail to notice how Wright overcrafts each scene, oblivious to their overall impact. He employs his patented Steadicam tracking shot -- the same one he used in Atonement and Pride & Prejudice -- for a scene where Erik is ambushed by some baddies, and while it's nice to see an action sequence play out without cutting, it fails to register with any significance. Additionally, for the entire middle portion of the movie, Wright holds the audience hostage with an annoying British family (led by a wasted Olivia Williams), then doesn't even have the decency to finish them off. A compromise for a PG-13 rating, I suppose, yet one that denies the audience some basic viewing pleasure, a takeaway that serves as Wright's M.O. "I just missed your heart," Hanna says -- as Ed Gonzalez points out -- at the beginning and end of the film. By a mile, sweetie. 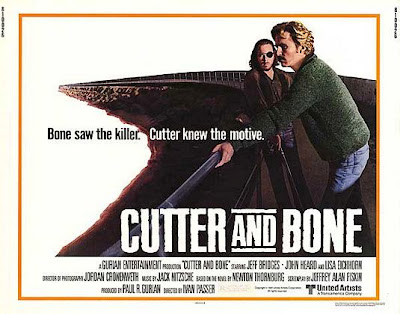 Cutter's Way, the moody 1981 neo-noir starring Jeff Bridges and John Heard, has had remarkable staying power for a movie left for dead on more than one occasion. No doubt its reappraisal has mainly to do with the steady ascendency of Bridges's career, so those who know the actor solely from his post-Dude period or his early Last Picture Show/Thunderbolt & Lightfoot era ought to check out one of his best performances from the long stretch of years in-between, when his handsomeness as a movie star clashed with his versatility as a character actor. As Richard Bone, a lazy drifter who one night witnesses (or thinks he witnesses) the body of a young woman deposited in a garbage can, Bridges is at his most engagingly self-effacing, seducing women so effortlessly he's almost apologetic about it. Yet he also reveals how Bone's hesitancy becomes a liability, so unreliable as an eyewitness that the police initially finger him as a suspect. Bone is a coward too, a trait that I was going to say didn't jibe with Reagan Era heroics, but which I have to admit is an unusual quality for an actor of any era to portray. Bridges unreluctantly plays reluctance, heroically plays lack of heroics, and it's a key to a large part of his appeal.
He also plays Richard Bone with concentrated attention toward his co-star who, as Alex Cutter, gets the showier role. Anyone familiar with John Heard, the fade-into-the-scenery character actor with an endless stream of film and TV credits (Big, After Hours, The Sopranos, Entourage), may be shocked by his balls-out flamboyance here. A Vietnam veteran with a no-longer-functioning eye, arm and leg down the left side of his body, Cutter spends his days drinking booze and insulting the world around him with bebop, stream-of-consciousness prose. (Gary Sinise clearly based his post-Vietnam version of Lt. Dan in Forrest Gump on Heard's performance.) It's fascinating to watch intelligent characters in milieus far beneath them, revealing themselves to be not as clever as they think they are. Cutter -- possibly out of boredom, possibly something more -- develops a fixation with his friend Bone's case, particularly when the prime suspect takes the shadowy form of local oil baron J. J. Cord (Stephen Elliott, who made a career out of playing rich bastards, which were never in short supply in 1980s). 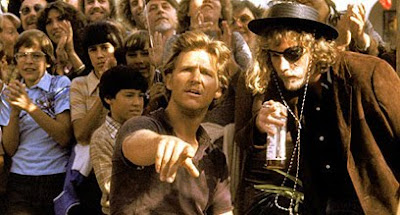 Cutter's Way was directed by the Czech filmmaker Ivan Passer, who wrote the screenplays to Milos Foreman's 1960s-era The Fireman's Ball and Loves of a Blonde; like so many European directors (including Foreman himself), Passer shows an endless fascination with American culture. From bars to back alleys to beaches, his camera is always alive, ever inquisitive, conjuring an atmosphere that could be called jauntily cynical. (No wonder his career in Hollywood was cut short.) Based on a novel by Newton Thornburg (called Cutter and Bone, the original title of the movie and the title I prefer), the screenplay by Jeffery Alan Fiskin is elegant and literate, with a structure so organic it's practically invisible. At first, a lengthy sequence involving Bone's attempt to seduce Cutter's despondent, alcoholic wife, Mo (Lisa Eichhorn), seems to be keeping us away from the "important action" occurring offscreen (Cutter's attempt, with the murder victim's sister, to blackmail Cord), until it dawns on you that this is the important action. Regrettably, Fiskin and Passer stage, in the closing minutes, a headsmackingly dumb scene with a horse that plays like inexperienced filmmakers using the only means they can think of to move a character from Point A to Point B. But it doesn't shake the power of the climax, or the totality of this extremely fine film.
Posted by Craig at 4:33 PM

First review of yours for me. I liked Hanna much more than you. I thought the young actress did a magnificent job. The rest of the cast not so much. As to your review, apparently you have not learned yet of an essential ingredient needed in order to enjoy many movies. It is called suspension of belief.

Thank you for your comment, Anon. I'm glad you enjoyed the movie. As for suspension of disbelief, I've always been of the mind that that's the filmmakers' job to create, not the viewer's, but I guess we'll have to disagree on that.

"Suspension of disbelief"? Exactly what the hell is that? Sheesh, these Anonymous people and their foreign languages... someone deport these illegals back to Mexico already.

I stepped into the Way Back Machine to find this one. I knew you'd written it up, and I couldn't remember if you were strongly for or against, but I was pretty certain it was one or the other.

I watched this last night and have to say I really enjoyed it. I admit, my expectations were low; the trailer, despite its vivid look, felt like a yawn to me. I think part of what surprised me is that the movie isn't all rapid fight sequences.

The only problem you've articulated here that I identify with concerns the protracted bloodless fight sequences in the middle of the film that clash with the way Hanna dispatches armed thugs early in the film. I realize the guys coming after her are only supposed to capture her, but she would be operating with license to kill. And I guess that brings up this: I don't have a problem that Blanchett's character is more concerned with Bana as a threat; just that, even after Hanna kills about five people in five seconds, she still thinks she can be taken alive by three guys, when in fact she was engineered to be unstoppable.

But, so it is. The other cuts you had a problem with I thought worked well. I felt the pacing throughout was very strong. This won't be in my top 10 this year, but I'm not sure it'll be far out of it.

I can see how "Hanna" might play better on DVD, where it looks more like an above-average TV show. This is one of those films where I'm in enough of a minority opinion to second guess myself. (One of my dumbest pans was "Eastern Promises"; what the hell was I thinking?) When that's the case I'm usually willing to give the movie another go. For some reason, though, I have no urge to see this one again.