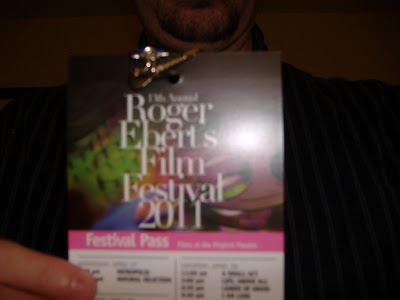 "When we started out (with our first film project), we went in with the idea that everybody has a story to tell. And by the end, we learned, not everybody does."
-Sandra Fierlinger, co-director of My Dog Tulip,
with the funniest quote from Ebertfest so far
Also known as the Roger Ebert Overlooked Film Festival, this year marks the 13th annual Ebertfest held in Champaign-Urbana, Illinois, and my first foray to both the festival (hell, to any film festival) and to Roger's hometown. Venues are held in two locations: screenings at The Virginia Theatre on Park Avenue in downtown Champaign; panel discussions at the Illini Union on the University of Illinois campus. For future attendees it should be advised that the Union Hotel is also the prime place for lodgings; I was too late in making reservations, however, and am staying instead at the Hampton in Urbana on the northern tip of campus -- which lacked hot water in this morning's shower and possesses a certain hard-edged charm. (When I asked the front-desk person if there were any shuttles to the Theatre, she replied with a curt, "No." Not any alternative suggestions for bus transport, nor offers to call a cab. Just "No.") But the hotel does have the benefit of being within a ten-minute walk of the Union and an equally short drive to a downtown parking garage only a couple blocks from the Virginia. Parking was one of my biggest concerns coming in, but it's surprisingly cheap and easy. 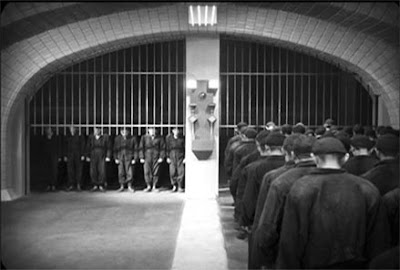 Opening night proved to be a very enjoyable (if very late) evening that deviated from the regular program, Chaz Ebert explained in her introductory remarks, in that two films were shown instead of the traditional one 70mm event: Fritz Lang's classic Metropolis; and last month's SXSW festival winner Natural Selection. This was actually the second time in two months that I'd seen the newly restored Metropolis, the first being in February at Indiana University with music from a 17-piece Jacobs School student orchestra. The Ebertfest version was scored by the Alloy Orchestra, a three-person unit renowned for their silent-film music that's heavy on percussion and electronica and banging pots and pans. This seems to be a minority opinion here, but I found their approach a little grating, while obviously passionate and ambitious. I'm not sure, though, that sound effects are needed for every single action and gesture in the movie. I thought that the more traditionally classical performance by the Jake, the first use of the "new" sheet music (based on the formerly lost original score by Gottfried Huppertz), was more effective. Either way, Metropolis is still a stunning experience. An indestructible classic, if the movie could survive Giorgio Moroder, it can survive anything. 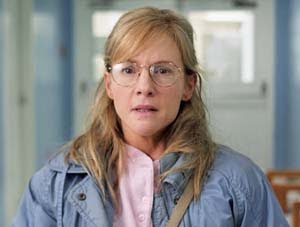 The Ebert-led jury in Austin slathered Natural Selection with prizes, and it's easy to see why a good Darwinist like Roger flipped over it. Robbie Pickering's road comedy about a fundamentalist housewife's search for her sperm-donating husband's son spends its first half scoring easy points on the Christian right and its second half doubling back for some hasty deepening. (The Ebertfest audience ate it up, especially Loud Laughing Guy sitting behind me in the balcony: "HAW HAW HAW HAW!") It's always tricky with a target like this, not because I think it's an undeserving topic for satire, but I guess I want a filmmaker to challenge his own assumptions, to explore where these characters are coming from, and depicting a minister who swears and says "goddamn" a lot seems less than that. Yet, somehow, my dislike for the movie transformed almost imperceptibly into delight: Pickering has a knack for tightening screwball comic logic, so that the movie becomes a sort of Preston Sturges film about evangelicals; and he's doubly blessed having Rachael Harris as his lead. The Ebertfest program notes assure us that "we'll be hearing a lot about Robbie Pickering" this year, but rest assured instead that it's Harris (who has been in attendance this week, along with Pickering) who's going to be the topic of conversation. She's phenomenal, and it was an honor to shake her hand and tell her so. 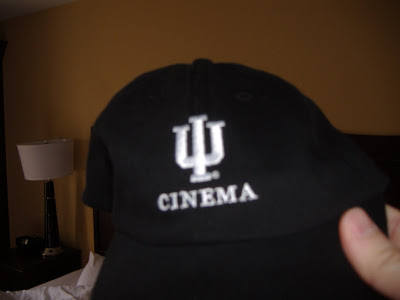 Speaking of handshakes, Roger Ebert, as reported, has a grip like a vise. After thirty years of reading his books and watching the guy on television, plus approximately fifteen years of occasional correspondence (I never expect him to remember who I am, but he at least takes the trouble to pretend he does), this was the first time I'd met him face-to-face. I'd also been asked by the IU Cinema's director to present him with a gift: a Cinema cap. Opportunity knocked in the Theatre lobby immediately following the Metropolis screening: the witty bon-mot I'd had planned, something about accepting a gift from a Big 10 rival (HAW HAW HAW HAW!), promptly dissipated, and I babbled something semi-intelligible instead. No matter. He shook my hand again, then placed his hand over his heart.
Coming Next: Day 2, Umberto D., My Dog Tulip, and Tiny Furniture.
Posted by Craig at 11:20 PM

It's funny because I have Metropolis on DVD somewhere and yet I still haven't watched it. I know... sad! But it must have been quite the experience to see it at Ebertfest. It would be great if Ebert also screened Lang's M, and then the audience could argue with each other afterwards about whether Lorre gets a just punishment at the end and who, exactly, the movie is blaming for the deaths of the children. Now THAT film, I would totally see at any film festival, especially Ebertfest.

When you met Ebert and shook his hand, did you explain to him that you manage the Porlock website and that he follows your Twitter page? I've never met him, so I'd be the last person to know anything, but I would be amazed if he didn't actually remember you--particularly since you say you've been corresponding with him for 15 years. And again, he's tweeted those unforgettable pieces you've published about '67, so I would assume he'd recognize you, at least by name.

How did he respond? Was he able to speak to you?

Adam, I'll be curious to know if that's the same "Metropolis" DVD I watched about a year ago. That one was the previous version of fiom, the one before the recent discovery of the footage in Buenos Aires that was incorporated into the new version. The "new" footage is damaged yet essential; the older version of "Metropolis" features several title placards explaining the action that was unavailable to see onscreen.

In sum: It's one of the greatest movies ever made. Watch that DVD. Then, whenever you get an opportunity to see it on the big screen, jump at the chance.

What I meant with Roger is that I've corresponded with him in so many different incarnations (i.e., jobs and locations) that there's no reason why he should know who I am, and it would have been too long to explain when I saw him in person. As you'll see when you attend one of these, Roger has a lot of friends, and he's incredibly gracious of his time with as many of them as possible.

That one was the previous version of fiom, -- Gah, I meant "the film," not "fiom." Can't type, need coffee.

lol. Actually, I recorded Metropolis off TCM one time, so I have no idea which version's on there.