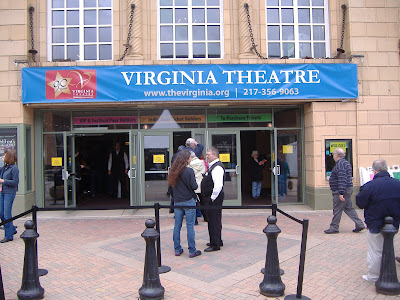 At the end of Day One at Ebertfest, I left you stranded with Loud Laughing Guy up in the Virginia Theatre's balcony, having successfully given him the slip. Or so I thought. On the second day, alas, he tracked me down, from the balcony to the downstairs right corner for the evening screening of Tiny Furniture. Remember Night Court? Remember the really obnoxious solo male guffawer that penetrated through the more canned audience laughter? I swear it's the same guy: HAW HAW HAW HAW! In principle there was nothing odd about the laughing -- Tiny Furniture is a very funny movie. It was the fact that he was often laughing during the intervals between the jokes that gave those of us around him pause.
But I digress. Most of the attendees have been wonderful (even if a few middle-aged and elderly moviegoers continue to counter the myth that teenagers are the only ones ruining movies by talking and texting). My own IU Cinema hat -- the same kind as the one I gave Roger -- attracted the attention of a few visiting Hoosiers at the first morning panel discussion: "Personal Stories in Film." I also met for the first time a few fellow online bloggers: Kenji Fujishima, Odie Henderson, and a bleary-eyed Matt Zoller Seitz. Matt was getting coffee right before the Thursday afternoon screening of My Dog Tulip. "I'm leading the Q&A with the directors after the film," he explained. "Oh," I said, "have you seen it before?" "No," he admitted. "So I'll be watching very closely." 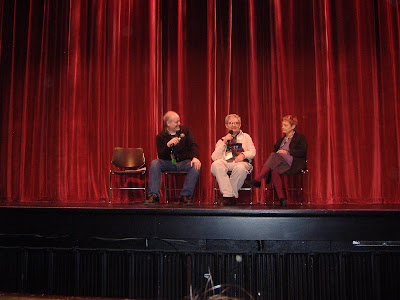 I have little to say about the day's first movie, Umberto D., because there's nothing possibly new that's left to say about it (De Sica, Neorealism, cute dog tricks). And I have unfortunately little to say that's nice about My Dog Tulip, which essentially stretches out a poop joke over 83 interminable minutes. Actually, that's not fair: piss, vomit, and doggie fornicating also figure prominently -- over and over and over and over again -- in this R-rated canine cartoon. I haven't read J. R. Ackerley's novel on which Paul and Sandra Fierlinger's animated film is based, but what may have been charming on the page is deeply tedious onscreen, even when narrated by Christopher Plummer. I feel badly writing that, since the Fierlingers came across in the Q&A as committed artists who made the movie they wanted to make. It's just not the movie I wanted to see. 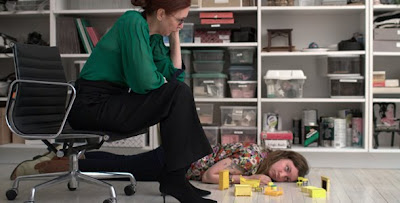 Easily the best new film I've seen at Ebertfest so far is the one I dreaded the most: Lena Dunham's Tiny Furniture, which has enjoyed national festival success and experienced an intense backlash with a rapid speed appropriate to its YouTube Generation milieu. Dunham wrote, directed, and stars in the picture as Aura, a recent graduate of an Ohio college who returns to live at her mother's swanky New York apartment (a key character played by her real mother, Grace Dunham). As a screenwriter, Dunham has a wonderful ear: one character, a relentless social climber, is described as the kind of person "who would attend the opening of a fucking envelope." What amazed me, however, was her eye: Rather than shake the camera around to create the illusion of reality, Dunham nails it to a tripod and demonstrates what the best filmmakers all possess -- an intuitive sense of physical space. Tiny Furniture is really about the relationship between one's physical and mental spaces: the feeling of being too big to stay in your room, yet too small to venture out in the world. It hooked me right away, but several folks around me hated the movie with the kind of hostility that invites a dimestore psychological interpretation. Something about Lena Dunham -- her gender, her privilege, and perhaps most of all, her plain-Jane looks -- seems to get to some people, as though thinking, How dare she? I say talent is talent, in whomever and wherever it arises. Tiny Furniture isn't a great movie. But it is a great first movie, and I look forward to seeing what she does next.
Next: Day 3, with 45635, Me and Orson Welles, and Only You.
Posted by Craig at 1:20 AM

Very much enjoying your updates.

Something about Lena Dunham -- her gender, her privilege, and perhaps most of all, her plain-Jane looks -- seems to get to some people, as though thinking, How dare she?

I think that's exactly right. Now, Dunham brings some of this on herself in that she puts a lot of herself (physically and emotionally) on the screen and she was happy to play the media game when her film came out. Quentin Tarantino, despite all his admirers, rubbed a lot of people the wrong way for the same sort of stuff early in his career. But she does seem to be put in this no-win situation: if she utilizes her family's relative wealth, it's as if she has no talent, and if she tries to put it all on her shoulders it's as if she's a shameless attention whore. She can't win. If she had the figure to appear on the cover of Maxim, people would think she was gifted. But she looks too much like the rest of us, so people find reasons to convince themselves that she's talentless. I was down the middle on Tiny Furniture, but I thought the treatment of Dunham was often unfair.

Now, Dunham brings some of this on herself in that she puts a lot of herself (physically and emotionally) on the screen and she was happy to play the media game when her film came out.

Michael Phillips (who really liked the movie) brought up the former point at one of the Ebertfest panels, in terms of how that physical and emotional nakedness makes some people uncomfortable. I found her approach -- her sense of humor -- surprisingly distinctive: not squirm-humor (well, until that one scene), nor is she purely an ironist. Or if she is, it's not the detached kind of irony that makes everything go down easy. I plugged into the droll wit of scenes like the one where Dunham sends up the kind of emotional climax in movies where a character trashes a room, breaks vases and furniture, and lays on the histrionics. In Dunham's hands, Aura's emotional climax comes when she scatters a few magazines, mildly raises her voice, and that's hilariously it. A similar sequence is the one where Aura reacts to the "out of control" party of teenagers who are all behaving rather tamely. I guess that's irony, but it's the intimate kind, rather than the detached, where she makes herself the butt of her own joke.

In terms of the latter point, I think some critics are getting so caught up in "the media game" that they're having difficulty separating what's onscreen with what's happening off. I've never seen a Lena Dunham interview, and even if I did, I'd put no more stock into it than I do the words of Quentin Tarantino or Oliver Stone or Spike Lee. Granted, in exceptional cases, like Mel Gibson, the performer or filmmaker may make the distinction more difficult on his own volition.