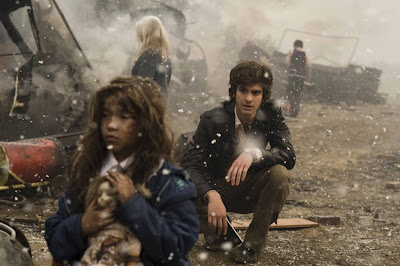 (Warning: spoilers.)
The acclaimed Red Riding Trilogy, a sprawling, ambitious triptych based loosely on the "Yorkshire Ripper" murders that terrorized northern England in the late-70s and early-80s, contains the most easily distracted pursuit of a serial killer I've ever seen in movies. All three parts -- subtitled, respectively, 1974, 1980, and 1983 -- begin with journalists, police officers and/or legal solicitors doggedly committing themselves to cracking the case, only to get sidetracked into foolishness. I haven't read David Peace's quartet of novels on which Red Riding is based (one, 1977, was eliminated for the production), but his characters apparently haven't seen enough movies to know that they shouldn't dally with colleagues, psychics, or mothers of victims; that those they trust the most will ultimately betray them; that it's unwise to leave an emotionally fragile person alone for a few hours before an attempted getaway; and that those at the highest rungs of power are always guilty. Red Riding is another "fact-based" film saga that's really a compendium of cliches. And there isn't enough momentum in the entire five-hour narrative to propel us through the contrivances without noticing. 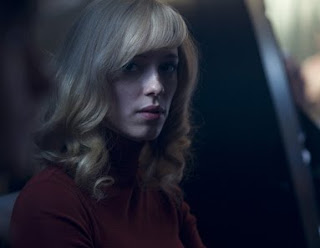 Not that there aren't virtues scattered throughout. Andrew Garfield (set to star in Marc Webb's 500 Days of Spiderman), turns his cub reporter in 1974 from a callow hotshot into a dangerous obsessive. His intense affair with a brittle Yorkshire woman (Rebecca Hall, filling in a sketch of a character) whose red-coated daughter was snatched and killed, her body fastened with swan's wings, is depicted with two or three grainy, jittery love scenes too many (the first installment was directed by Julian Jarrold, another Paul Greengrass imitator without the finesse). But Garfield gains in stature following each brutal pummeling he receives from the henchman of the local zillionaire (a stocky, swaggering Sean Bean) and the vicious, corrupt Yorkshire police force. He pulls off a shockingly cathartic climax with conviction: it's the most persuasive transformation in the entire series. 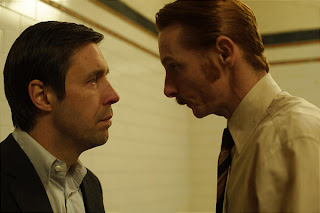 James Marsh's 1980, the second installment and the one focused most on the hunt for the real-life killer (parts one and three offer a fictional counterpoint, which becomes confusing), features Paddy Considine as the detective assigned to lead the investigation, a possibly unsound decision given his efforts to ferret out the thugs with badges from the previous movie. One of them, a wiry redhead with black holes for eyes, is played by Sean Harris as a twitchy psychopath in the Robert Carlyle tradition (think Begbie in Trainspotting). Harris energizes every scene he's in, yet the character is so overtly malicious you wonder why anyone with a note of caution would turn his back on him for even a moment. Although Marsh has been praised for offering "the most cinematic" of the three films, I found 1980 inert and rhythmless. Like its protagonist, the movie is caught between a serial-killer story and a police-corruption story and can't make up its mind which it wants to pursue.

The final chapter, 1983, has been roundly panned as the weakest of the trilogy, but for most of its running time I was grateful that the series was finally getting to the point. Anand Tucker directs with the smooth visual acuity he brought to Steve Martin's Shopgirl (a movie that I otherwise don't think works): several wide shots of Yorkshire convey its forlorn, industrial landscape; and he pulls off a risky moment where an apparition of an abducted little girl runs past a congregation of TV news crews and passers-by: it's what The Lovely Bones could have been. Still, it stumbles. David Morrissey's weak-willed, morally compromised detective from the first two films abruptly grows a spine; while his counterpart, a low-rent public defender (played by the likable Mark Addy, the paunchy male stripper from The Full Monty), suddenly finds his conscience. These unlikely heroes join forces for a howler of a climax, the kind of last-minute 180-degree turn that Altman skewered at the end of The Player. (All it needs is the accompanying dialogue: "What took you so long?" "Traffic was a bitch.") 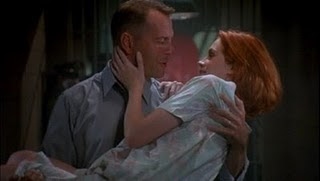 The Red Riding Trilogy isn't a disaster by any means; individually, each part holds your attention. But like so many docudramas it seems to be receiving (and expecting) praise for slogging in its own solemnity. In contrast, Bong Joon-ho's Memories of Murder and most of David Fincher's Zodiac were far more successful at conveying the red herrings and red tape of a criminal investigation in a way that made them compelling and exciting. They were a hell of a lot livelier to boot, without ever losing their sense of unfolding horror. Red Riding is a procedural without process.
Posted by Craig at 2:00 PM

I couldn't even make it through 1974, so I decided not to watch the other two parts. I thought I read that they filmed the fourth book but decided not to release it in the U.S.

It gets tedious so I can see why. Didn't know that about '77.