"I say, are you sure this is the way to Porlock? By the by, what's that howling? My my, look up at that full moo-!" 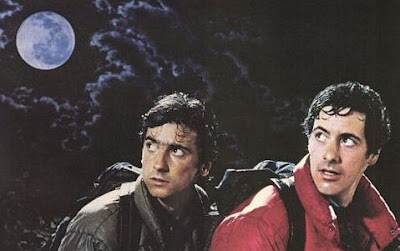 Last year, responding to a post pimping The Man From Porlock's 2nd anniversary, online pal Ryan Kelly asked whether the occasion might technically constitute a birthday instead? I replied that it probably was more accurately a birthday but that there were elements of a marriage as well. That's my tongue-in-cheek way of saying that maintaining a blog is a commitment -- or wait, what's the preferred term these days? Ah, yes: an investment -- but one that continues to be a blast in what is the longest, most serious, most enjoyable relationship I've ever had running. So, what the hell, I'm calling it an anniversary: my third.
One of my resolutions this year was to see and write about more international films, a long-standing blind spot of mine. Looking back through a year's worth of posts, I'm pleased to see reviews of A Christmas Tale, Il Divo, Irma Vep, Goodbye Solo, Sin Nombre, Red Cliff, 35 Shots of Rum, Loves of a Blonde, Army of Shadows, Broken Embraces, and Vincere among them. Nowhere near Ed Howard territory; but for this moviegoer, not bad. Another goal was to become better acquainted with film history, which led to a lengthy piece on Robert Altman: The Oral Biography, followed by a five-part series on Pictures at a Revolution. I was pleasantly surprised by the response toward both of these topics, as well as toward an "Altman Tournament of Champions" that I began purely as a goof only to keep going all the way to a Final Four. And I was delighted that much of the attention derived from either links or tweets by two of my favorite writers, Tom Shone and Roger Ebert. Thank you, both: I'm deeply honored.
In truth, though, I'm thrilled whenever anyone takes the time to post a comment, so this is where I thank all of you: Steven, Jason, Edward, FilmDr, Adam, Kevin, Hokahey, Fernando, Jake, Ed, Jeremy, Tom, Ronak, Greg, Ryan, Dan, Farran, Larry, Stephen, and Stephen, and anyone else I've neglected to mention. Or, if you've never commented but are a regular reader, you have my gratitude as well. Nobody has ever asked me, "How long do you plan to keep blogging?" but if anyone did my answer would be: "As long as it's still fun." Thanks, to all of you, for making it fun.
Posted by Craig at 12:01 AM

Congratulations, Craig! I especially enjoyed your leisurely Pictures at a Revolution series.

Congrats, Craig! Yours continues to be one of my favorite stops. Your series "Pictures at a Revolution" was phenomenal, and I always look forward to your Sunday posts where you take a look at a couple of films -- and not always films that are in their theatrical run either. I especially liked your recent review for THREE BURIALS...always great to see people going back and writing on underrated film. Keep it up!

Little known fact ... Ed selects the French language on all his DVDs and reads the English subtitles.

It's been three years? That means you started blogging two years and five days before me.

And let me assure you, I'll continue commenting as long as reading your blog is fun.

Thanks, everyone, for the well-wishes.

Oy. I read this, had to leave for school, and forgot to comment when I got home. My most sincere apologies. Happy birthday, anniversary, whatever to this blog, one of the net's best reads. Whatever it's called, this is a time to celebrate!

Congrats, Craig. Always looking forward to every new post from you and hope that you continue to find writing this blog fun.

Sorry I didn't get your initial comment, Steven. Thanks for trying again.

Congratulations, Craig! Apologies for the tardy note, I'm afraid I'm still in my trying-to-get-back-to-reality-following-Toronto phase. Adore your writing, year in and year out. More!

Thanks, Fernando. I enjoyed your Toronto reportage, including the videotaped round-robin with the other critics. Far too hard on yourself, my friend: You came across just fine.