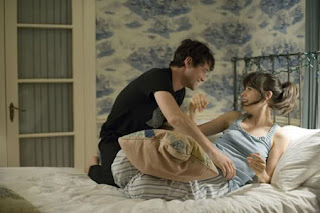 Let's get this out of the way: of all the films I could choose for my first attempt at live-blogging, why in the holy name of Pandora would I pick (500) Days of Summer? Yes, it received mostly favorable reviews upon its August release, including an enthusiastic rave of my own, and ended up a modest box-office sleeper. Yet many critics I respect detest it with such intensity that I braced myself for a second viewing where, I feared, the movie would seem embarrassingly facile. Surely I'd see the error of my ways....?
Three viewings later, I can now say that I adore (500) Days even more. (And don't call me Shirley!) Make no mistake, though, this is a film that practically goads you into hating it: an omniscient narrator; a non-chronological plot structure; fantasy sequences; musical numbers; split-screens; a hip soundtrack; pop-culture references; women named after seasons; karaoke. What's not to loathe? More than a few reviews even took umbrage with the parentheses in the title -- possibly a variation on Roger Ebert's amusing argument that a good movie has never been made with punctuation in the title. (I believe the original context was Robert Aldrich's final film, 1979's ...All the Marbles.) Ebert didn't care for (500) Days' parenthetical either; but he did love the movie, and for once I think his ebullience is on the money.
This is a self-flattering argument I typically dislike, but I think audiences were generally more attuned to what (500) Days of Summer is actually doing and saying than the majority of critics. Even the favorable reviews seemed to skate along the movie's surface, describing it as a light-hearted rom-com when in fact several different and difficult levels of meaning are coordinated to critique the dubious elements of modern romantic comedy. First time I saw (500) Days of Summer, I wasn't sure whether or not I liked it until the movie was more than halfway over. It's the kind of film that prompts me to reflect on my own responses, the kind where with each viewing I find something new.
As Portnoy's shrink would say, "Now vee may perhaps to begin. Yes?"
*** 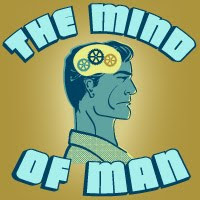 "Author's Note: The following is a work of fiction. Any resemblance to persons living or dead is purely coincidental. Especially you Jenny Beckman. Bitch." Hoo-boy! Five seconds into (500) Days, and it's already pissing off the literal-minded. Some reviews called this a misogynistic, mean-spirited start. Tone is everything, however, and the tone of this caption (three quick fade-ins and -outs) is clearly deadpan. Second, I think this brief doodle does more to capture the post-breakup male mind -- the lunatic dissonance between emotional detachment and sudden outbursts of rage even years after -- than hundreds of romantic comedies have achieved over the last thirty years. Women in the audience were laughing particularly loudly, the way one often reacts to a shock of recognition.
"This is a story of boy meets girl." And here's our omniscient narrator, aka Reason To Hate The Movie #2. The voice, which is so disembodied and all-knowing it made me giggle and cringe at the same time, belongs to Richard McGonagle. First time you hear it you think, "Jesus, is the whole movie going to be like this?" Here, on a repeated viewing, it's easier to settle into the narrative, knowing that the narration will be used sparingly.
Here we meet our protagonists -- Tom Hansen of Margate, NJ, and Summer Finn of Shinnecock, MI. The extraordinarily well-crafted screenplay, by Scott Neustadter and Michael H. Weber, is filled with tossed-off moments that pit two separate elements against each other: in this instance, the literary/mythical evocation of the characters' names with the ordinariness of their hometowns. This happens so repeatedly that no way it's by accident. If the movie were a court case, it would be called Romance v. Reality.

"This belief stemmed from early exposure to sad British pop music, and a total misreading of the movie, The Graduate." Great line (and, speaking from personal experience, very true.) Also like the metaphor of Summer cutting her hair and feeling nothing following her parents' divorce. Neustadter and Weber are good at writing emotional shorthand that isn't belabored with significance. Either that or the director, Marc Webb, frames these moments in such a way that you only pick up on them on the fly. A rare gift for a first-time filmmaker.
"But you should know upfront, this is not a love story." The genius of this prologue-closer is that even though the narrator is being on the level with us, we don't really believe him because we're so accustomed to the tropes of the rom-com genre. The genius is that the movie knows this, and uses it to generate suspense anyway. It plants a seed of doubt into our assumptions, as an irritatingly honest friend might do regarding a relationship that's not working out. 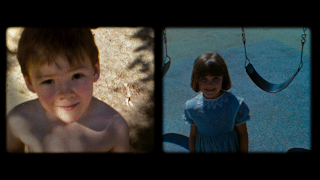 Opening credits begin. And if there's a more perfect song to score them to than Regina Spektor's "Us," I can't think of one. I have no idea what the song means to her ("They made a statue of us/and put it on a mountaintop/Now tourists come and stare at us/Blow bubbles with their gum/Take photographs have fun, have fun"), but in the context of the movie the lyrics underscore the contrast between how couples see themselves and how they are perceived by others. ("They'll name a city after us/and later say it's all our fault/Then they'll give us a talking to/Then they'll give us a talking to/Because they've got years of experience.") Pure poetry.
Love how the individual credits for  Joseph Gordon-Levitt and Zooey Deschanel come with a close-up of one of their eyes, the former's right and the latter's left. Webb's use of split-screen is never a gimmick: he's suggesting that these two people individually do not feel whole. Despite the narrator's last words, the director is teasing us with the notion that Tom and Summer have been destined to be together since they were kids. (Think Audrey Tautou and Whatshisname in Amelie.) Also love the final split-screen shot: young Summer blowing dandelions on the right side of the screen, which turn into bubbles with young Tom on the left. Bubbles about to burst.
***
We're several paragraphs into this thing, and the movie proper hasn't even started yet. If you haven't fled to another showing of Avatar by now, let's continue with (500) Days of Summer in "Part Two"....
Posted by Craig at 3:55 PM

I like this idea a lot. I just watched this a second time the other night and share a lot of the same feelings that you do. I know you'll get to the best use of the split screen when the scene comes, but I just have to mention that that use of a Regina Spektor song ("Hero") is brilliant, too.

I like what you say about the film not catering to the tropes of the rom-com, and one of the reasons the movie may feel a tad askew tot he viewer is that it is relying on us believing everything we've been taught by thousands of ho-hum romantic comedies....and this film isn't interested in any of those things.

I didn't like the movie as much as you, but I'm quite fond of it and I'll be coming back to this and the subsequent entries later tonight. Great idea, Craig.

I'm so glad you still felt the same, because when I first watched 500 Days, I expected something gimmicky and too cute and clever for its own good. To my surprise (and infinite gratefulness), I fell in love with this movie more than I have with any new movie I can remember in a long time. I've got a pile of things to watch (thanks to a screener fairy, who needs them back) and among them is 500 Days and I'm really tempted to "lose" it before I give the package back so I can watch it at least once a month.

Thanks, Kevin and Ed. Like much of my posting, this one's taking a bit longer than expected, but I'm planning to get the next installment in by tomorrow. I'm anticipating three overall. We'll see.

That Regina Spektor split-screen is great, Kev. I'll be getting to that too.

The genius of this prologue-closer is that even though the narrator is being on the level with us, we don't really believe him because we're so accustomed to the tropes of the rom-com genre. The genius is that the movie knows this, and uses it to generate suspense anyway.

So very true. I shouldn't admit this, but the first (and still only so far) time I watched this movie and heard that line, I thought, "Oh, come on, it's going to be a love story right?" I wasn't brave enough to believe it could be anything but that.

I agree with all your observations thus far, but had to highlight that one. Keep it going!