Death Cab for Cooty (Goodbye Solo and State of Play) 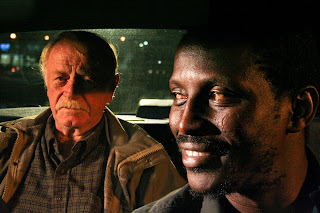 Goodbye Solo, the newest film by Ramin Bahrani, presently Roger Ebert's favorite four-star director (the competition is fierce), begins with a grabber: a mysterious old man (Red West) offers his cabbie (Souleymane Sy Savane) a cool grand to take him, in two weeks, to Blowing Rock, a vertiginous mountaintop where, it is implied, he plans to kill himself. The driver, a loquacious African immigrant -- the "Solo" of the title -- agrees reluctantly, if only to talk this taciturn white man -- whose name is William -- out of his plans. What occurs over the next several days is largely a series of one-way conversations, as Solo shuttles William from a local cineplex to a hotel room and back again. Later they become roommates, during which Solo becomes more emotionally invested in William's life, trying to uncover the source of his despair as his final destination approaches.
Any general description of Goodbye Solo makes it sound like a cringeworthy Hollywood buddy movie where a spry youth and a crusty geezer teach each other how to live. It's also dicey whenever a film indicates that a black man's sole purpose in life is to help whitey feel better about himself. (Fifty years from now, critical studies of current American cinema ought to be amusing.) For the most part, Goodbye Solo avoids being Scent of a Womaned or Bagger Vanced. Bahrani, whose previous films were the well-received Man Push Cart and Chop Shop, was born and raised in North Carolina and is of Iranian descent. At its best, the central relationship in Goodbye Solo dramatizes the specifics of Bahrani's heritage: moments of mutual understanding undercut by gaping chasms in communication; how the older generation has come to fee increasingl alienated from the country in which they were born.
Bahrani never pushes his effects (except for one misconceived scene, where Solo eyeballs a teenage movie theater worker -- whom he learns has a connection with William -- with the discomfiting intensity of Jack Horner sizing up Dirk Diggler); and he makes Winston-Salem, with its glittering streets and autumnal colors, an evocative stand-in for the changing face of America. Yet something keeps me from embracing Goodbye Solo completely. The downside of a film that thrives so much on silence may be that it's easier to hear the gears creaking -- the schematics that get Solo and William from Point A to B all the way to the end. The climax atop Blowing Rock is powerful stuff, and it's evident from this conclusion -- as well as the characterizations, so much more buoyant and believable than the walking dead who inhabit Kelly Reichardt's puny thesis statements (even William gets to wink and smile now and then) -- that Bahrani will make a great film someday. What he needs is to go beyond his metaphors and discover that the real mystery isn't one character's gloom, but another's goodness. 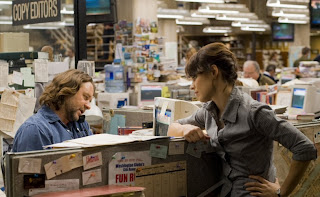 State of Play, a post-9/11 political thriller starring Russell Crowe as an old-school journalist sniffing out the kind of byzantine conspiracy that Gore Vidal believes makes the world go round, also gets off to a strong start. We're in the netherworld of Washington, D.C., down dark alleys and within underground subways, where people are shot for no apparent reason and accidents are never simply accidents. The latter case involves the comely congressional aide who falls to her death in front of a train. Crowe's Cal McAffrey smells a rat, and not just because the Congressman -- idealistic poonhound Stephen Collins, played with customarily likable mediocrity by Ben Affleck -- is his best friend from college. McAffrey is one of those screen journalists with uncanny instincts: sure, he digs around and weighs evidence like a good reporter should, unlike his rival for the scoop, political blogger Della Frye (Rachel McAdams); but he also just knows. Crowe's performance isn't as lived-in as Robert Downey, Jr.'s in Zodiac, yet it's a credit to his slumped shoulders and gravelly voice that he's able to sell this silliness the way a moviestar should.
It's not his fault that the more complicated State of Play gets the less interesting it becomes. The screenplay is credited to Matthew Michael Carnahan (Lions for Lambs), Tony Gilroy (Michael Clayton) and Billy Ray (Shattered Glass), and I'll bet that these three individualists didn't collaborate so much as have their rewrites grafted on top of each other. (The movie is adapted from a BBC miniseries.) One made McAffrey and Collins pals; another concocted a background story where the former is in love with the latter's wife (Robin Wright Penn, stranded on the sidelines like Bonnie Bedelia in Presumed Innocent, a time-bomb that never goes off); the third tossed in the Halliburtonesque "PointCorp" as the nebulously evil corporate entity, and so forth.
Whichever one created the scene-stealing stool-pigeon (a jaunty Jason Bateman) offered the most valuable contribution. Yet none of them, nor director Kevin Macdonald, seem to grasp that what made the type of 70s conspiracy thriller they're trying to emulate -- Three Days of the Condor, The Parallax View, Blow Out -- so effective was that those pictures were genuinely willing to hurt their characters. They were willing to hurt us. State of Play mourns less the death of any of its inhabitants than the decline of the American newspaper. That's a compelling stance, underscored by the closing credits sequence of a daily created from scratch: it suggests that a world without print journalism is one where we're all going to pay a price. A lovely self-contained montage, it would have been a bolder beginning than an ending.
Posted by Craig at 2:07 PM

To clarify my point about State of Play's screenplay: Obviously, the writers didn't invent most of the characterizations and twists. But they are largely responsible for the structure, the shaping and rhythm of scenes, and that's where State of Play fails to convince you of its reality. That may be an inescapable challenge of truncating a six-hour miniseries to a two-hour movie, as well as traversing the Anglo/American culture gap. Still, filmmakers make choices in emphasis and focus, and here I think they make the wrong ones.

I haven't seen Solo yet, but great thoughts about State of Play.

...what made the type of 70s conspiracy thriller they're trying to emulate -- Three Days of the Condor, The Parallax View, Blow Out -- so effective was that those pictures were genuinely willing to hurt their characters. They were willing to hurt us.

I'd forgotten about Bateman's performance in the film, but I agree that it's the highlight. I also completely agree that the more complicated it becomes, the more life is drained out of it.

OK. Just wanted to leave a comment. Trying to catch up and re-enter the blog world this weekend!

Thanks, man. I agree that "State of Play" is one of those movies that builds up a fair head of steam but wimps out on its own premise. "Shattered Glass" said more about the state of modern journalism, and was actually more disturbing in its light-footed way.