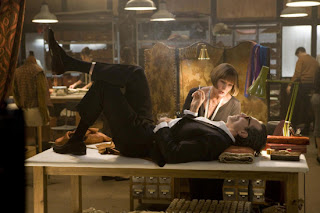 There's a remarkable scene in There Will Be Blood where Daniel Plainview goes to a brothel and we are left with only a relentlessly tight close-up of Daniel Day-Lewis's face. Rob Marshall's new musical Nine begins with a splashy widescreen number featuring the film's ensemble of leading ladies, yet a similar close-up of his lead actor's visage would have been preferable to the clutter in the dark passing for choreography.
You know you're in for a stinker within those first five minutes, a grim epiphany that I'm sure dawned on even the vapid Oscar forecasters breathlessly pronouncing for months that Nine sight unseen was a sure-fire contender. Its pedigree is certainly impressive: a director with a Best Picture winner already to his credit; an actor with two statuettes on his mantle; and six actresses with wins as well. The cast gives it the old college try, but they're working against a few insurmountable flaws -- the songs are terrible, the staging abysmal, and most of them can't sing in the first place.
Marshall overcame similar obstacles with Chicago, a film that's now derided for being as deep as a puddle, but one I still admire for its wit and energy and jaunty amorality (a tonic in early-aughts culture). The actors in that picture were having a blast -- Renee Zellwegger finally clogged up her tear-ducts and embraced her inner narcissist, Catherine Zeta-Jones her Jazz-Age hoofer, Queen Latifah her ripe sexiness, and Richard Gere his charm. The cinematography had a pasty quality, and some of the numbers were clumsily stitched together. But the editing as a whole helped move things along at quite a clip. 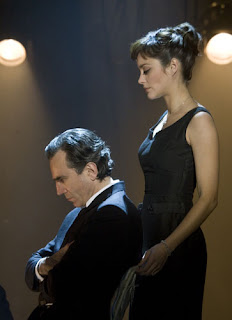 In contrast, Nine is sluggish and deadly dull. The scenes -- musical, comedic or dramatic -- have no oomph, and many of its master thespians look lost. Day-Lewis understandably wanted a break from heavy-lifting roles, but he's just coasting here. It's not a lazy performance: he empathizes with the character, a world-famous though creatively-blocked Italian filmmaker with the nearly unrhymeable name Guido Contini ("He drove a...Lamborghini"?); yet I suspect he was more committed to cobbling shoes during his sabbatical a few years back. As for the actresses, each playing a woman with a prominent role in Guido's life -- Marion Cotillard (estranged wife), Penelope Cruz (high-maintenance mistress), Nicole Kidman (unattainable muse), Kate Hudson (song-and-dance challenged journalist), Sophia Loren (mommy dearest), Stacy Ferguson (whore), and Judi Dench (M) -- the nicest thing to say is their flattering costumes make Nine the hilliest movie this side of Vertical Limit. As is often the case in her films, only Cotillard makes an impression. She broke out of Michael Mann's wax-museum Public Enemies to resemble a human being, and here she emerges from Marshall's dim lighting in the film's best (and most Chicagoesque) sequence, a striptease where Guido's button-down wife reveals her sexuality. It's as bad a song as the rest, but Cotillard lends it conviction.
Unfortunately, her director has none whatsoever. For a film set in vibrant 1960s Italy, adapted from a popular stage musical that was itself based on Fellini's 8 1/2, Nine is an indoor movie ensconced in shadows. (As usual, Marshall has zero sense of mise-en-scene.) And evidently the sound designer thought that the best way to make the music tolerable was to amplify the volume: I came out Avatar 3-D without problems, but Nine left me with a splitting headache. Marshall must have known the material was rank and so relied on smoke and mirrors in a desperate attempt to slip it past us. Too bad this time he lacks the ol' razzle-dazzle.
Posted by Craig at 1:10 PM

I couldn't agree more. I just came back from this and was utterly amazed by how abysmal it is. And, like you, I knew I was in for it within 5-10 minutes.

There are only two winners here. The first is Cotillard -- her face in that terrific casting scene. Wow! And her voice is terrific, too, although she -- like everyone else -- doesn't have a song worth singing. The second winner is Chicago, which looks absofuckinglutely tremendous in comparison -- better songs, better choreography, better editing, better story, better, better, better.

Whereas in Chicago Marshall cleverly jumps back and forth from singing to standard dramatic dialogue, this time he seems confused. He cuts away from the singing just when I was settling into it, and he cuts away from the drama just when I'm settling into that. It's not a good sign when you're at a musical -- and I like musicals -- and the notes kick up for a new song and you think, "Not again!" But the low point -- when I actually mumbled "Jesus Christ!" -- is when Judi Dench comes on for one of those a song-with-almost-no-singing numbers. And a repetitive one at that.

Though I didn't feel assaulted by the audio in my theater, I was assaulted by all the unnecessary cuts. The visuals are more disorienting than the shakycam in portions of The Hurt Locker. That's the thing ... In Chicago there's a great energetic rhythm and all the quick cutting suggests a rush to keep up with it all. Here Marshall looks to be adding motion to the motionless. It doesn't work. And he can keep putting people under a spotlight or dollying the camera behind obstacles all he wants, but it still isn't interesting to look at.

Great final minute though. I'll give him that.

Ever since they were going to make this movie, I asked myself who did they think was the audience for a musical about Italian cinema from the '60s? I rewatched "All That Jazz" a couple of weeks ago and consider that the unofficial musical remake of "8 1/2" which makes this movie redundant for me. I actually prefer Fosse's film to Fellini's.

I just came back from this and was utterly amazed by how abysmal it is. And, like you, I knew I was in for it within 5-10 minutes.

After the opening number, somebody in my theater said "Uh-oh" out loud. I heard him say it because it was me.

Whereas in Chicago Marshall cleverly jumps back and forth from singing to standard dramatic dialogue, this time he seems confused.

I'm struck by how cocky so many bad movies are these days. It's rare to see something like Nine that plainly reeks of desperation, which may be why I resist piling on as much as I'd like to. Also why I stuck around through the whole thing.

Agreed, the audio and editing both contributed to my head throbbing. Rarely do they feel in synch with each other.

And he can keep putting people under a spotlight or dollying the camera behind obstacles all he wants, but it still isn't interesting to look at.

If Saturday Night Live had any verve (which it hasn't in, you know, about thirty years), it would do a spoof, preferably with Daniel Day-Lewis as guest host, where his singing and dancing is repeatedly obstructed by other characters carrying objects back and forth onstage. I envision a ladder, tables and chairs, and a large fern.

Ever since they were going to make this movie, I asked myself who did they think was the audience for a musical about Italian cinema from the '60s?

An audience might have emerged had Marshall any ability to immerse us in this world. It's Italy but it could be anywhere, there's so little cultural flavor or period color. Even Under the Tuscan Sun got that part right. (Give me Tuscany and Diane Lane and I'll put up with almost anything....)

I couldn't believe there was a song about the Folies goddamn Bergère. I even know what that is and I was flabbergasted (Dench deciding suddenly to use a French accent was just the cherry on the shit sundae). And what the hell was that opening number? If you don't want to have words in the first song, fine: make it an overture. DON'T just have a bunch of women singing "la-la's" for five minutes.

I recently reviewed Almost Famous and talked about how revisiting that film always makes me fall in love with Kate Hudson, only to watch something else and remember that she's awful. Once again, she obliterates the love that my latest rewatch recreated.

I must say, though, that Penelope Cruz is like the Little Crush That Could; I've been underselling her for years but a recent Almodovar binge, the memory of her vital performance in Vicky Christina Barcelona (which along with Bardem's turned a boring ass movie into one of Allen's more surprising features) and now this are proof that she's just fantastic.

Jake, thanks for weighing in. I enjoyed your review of this movie a lot. Dench's bit seemed to be a misguided attempt to give her a bosomy number along the lines of Queen Latifah's in Chicago. Only, um, yeah, you said it.

I love Almost Famous too. Hudson's introductory scene is one of the most memorable of the decade. That film and Nine make a good textbook comparison of a director who's looking out for his actors and one who leaves them stranded.

I didn't care for P. Cruz in this picture: she veers from sexually assured dynamo to pathetic neurotic without warning. I'm with you, though, that she's improved dramatically over the last few years, her post-Tom-Cruise era. Maybe, with Cruz and Kidman already in the cast, they could have turned Nine into a story about women who have escaped -- or are trying to escape -- Tom's clutches. Add Mimi Rogers to the mix, star Katie Holmes as the tragic heroine who may or may not make it, and you've got yourself one hell of a movie: Scientology: The Musical!

Now there's a thought: career suicide by court. The sheer audacity might even stun Scientology's litigation wing into inaction.

As for Cruz, I think her part is awful, don't get me wrong. I absoluely hated how they immediately reduced her from this blinding sexpot to this needy, suicidal weakling. But that fleeting moment of pure sensuality was the closest this ever came to Fellini, or even the musical genre. Cotillard is the only one who had the chance to act, but Cruz walked away with the whole show for me, dubious achievement that it is.