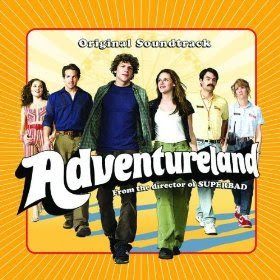 Two questions, separate but related:
Q1: Any good reason why the soundtrack to Adventureland hasn't been released? Will it be released? I've been to Best Buy and Borders several times since the film's opening, and it hasn't surfaced. It's not even available on Amazon.com.
Q2: Would it have killed HBO and the creators of In Treatment to add some Special Features to the DVD release of Season 1? Would it have killed them to have added any? Nine discs featuring 43 episodes with no extras seems a little ridiculous, particularly with a show that practically invites a dialogue on its performances, production design and subject matter.
I realize the economy is in no great shakes, to the point where perhaps production companies have been eliminating entire marketing departments. And, I realize that some products can be hard sells. Adventureland is a heartfelt coming-of-age story, my generation's Dazed and Confused, so it's no surprise that Miramax's half-assed PR campaign suggested that "the director of Superbad" had made another raucous raunchfest instead. HBO's In Treatment is a different kind of oddity altogether, a half-hour drama airing five nights a week, one with operatic bursts of emotion and long stretches of quietude. It's a difficult commitment at times, but one that can also be wildly addictive.
Adventureland's box-office ($14 million) has been a disappointment. However, an overwhelming majority of those who have seen it appear to like it quite a bit. And a big selling point of the picture is its filled-to-the-brim soundtrack of 80s pop hits. Never underestimate the power of nostalgia, Miramax. It's the Generation X drug of choice.

As for you, HBO, we're only too aware of your general post-Deadwood cluelessness on the potential market for your shows, so let me fill you in. Yes, In Treatment's ratings have been low, but those that are watching are inescapably hooked and want more, more, more. Did it occur to anyone that the devoted fan-base might like to see an extra about the original Israeli series on which the show is based? Or what real psychiatrists think about the show? Or that your star, Gabriel Byrne, has a following of swooning middle-aged women prepared to rend their garments with a zeal that would give Zac Efron's teenyboppers pause? Did it occur to anyone that a carefully packaged DVD set might help increase a show's following -- not to mention actual sales as opposed to Netflix rentals -- as it enters its second season?
I don't mean to sound harsh. It's a miracle when movies or TV series like these see the light of day at all, so those of you involved deserve at least some credit for that. Nevertheless, if you've got the balls to get the product out there, wouldn't it make sense to spend a bit more to get the word out there as well? It's too late to do anything for Adventureland's theatrical run, so I hope a soundtrack (and more) will be ready for the DVD release. I also think it wise to renew In Treatment for a third season (and pay Byrne whatever he wants), and have a special DVD "on-the-couch" edition choc-a-bloc with extras at the ready. I think you owe that much to the fans of both. For what it's worth, I'll say it again: Adventureland is a beautiful movie, and In Treatment a beautiful show.
Posted by Craig at 2:33 PM

I get the sense that "In Treatment" is shot on such a spare budget that there is nothing at all left on the cutting room floor for the DVD. Also hard to see what a commentary would add. I agree the show eminently deserves a third season, however.