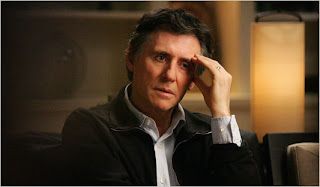 The flawed yet astonishing HBO series In Treatment features a lead character for whom the same adjectives apply. Dr. Paul Weston (Gabriel Byrne) is a psychotherapist with a knack for blurring the lines between the professional and the personal. He conducts his practice not in an office building but rather (in Season 1, now on DVD) the comforting study of his Washington D.C.-based home. He falls in love with one patient; he attacks another when provoked. He helps a teenage girl mend fences with her parents while growing estranged from his own daughter; he guides a bickering couple through marriage counseling as his own 22-year marriage is coming apart. He claims that he has to find something to love in all of his patients before he can treat them. He insists that all of them call him Paul. He joins Al Swearengen and Don Draper as one of the all-time great, fascinating, complex characters in the history of television.
No actor unravels as elegantly as Gabriel Byrne. In earlier screen roles, like the ones in Miller's Crossing and The Usual Suspects, he wielded his persona -- soft-spoken, haggard, with a glimmer of menace -- like a swiftly cutting blade. In Treatment reveals a Byrne who has aged gracefully into middle-age, still as handsome as his eyes are haunted. He also shows something new -- a warmth that burbles up from his deep Irish brogue. At first this staple of modern gangster thrillers seems like an unusual choice for a therapist until Byrne quickly establishes why he's exactly right: he's a great listener. (Ironically, Mark Wahlberg, who shares this quality, is one of the show's producers.) On In Treatment, Byrne makes listening the stuff of great drama.
Adapted from the popular Israeli series Be'Tipul, In Treatment has a premise that's innovative even by HBO's standards. Season 1 follows Paul through nine weeks of sessions with four sets of patients: Laura (Melissa George), a neurotic doctor, arrives on Monday mornings; Alex (Blair Underwood), a troubled Iraq War bomber pilot, shows up Tuesdays; Sophie (Mia Wasikowska), a preternaturally gifted teen gymnast, on Wednesdays; and the dysfunctionally married Jake (Josh Charles) and Amy (Embeth Davidtz) brighten the end of Paul's day every Thursday. Each week climaxes with Paul's own session with his therapist, Gina (Dianne Wiest), whom he semi-affectionately dubs "The Spider." Paul and Gina share an affectionate yet somewhat tumultuous professional history together (he was originally one of her proteges); and as his unbridled devotion to his patients clashes with her prickly emotional detachment, it doesn't take long to glean that that's about all they share.

It's hard not to make In Treatment sound like a soap opera, perhaps because it partly is. Yet each episode -- all of them only between 20-30 minutes long -- embodies a breathtakingly wide range of topics and genres, colors and tones. The deceptively simple staging represents elements of the theater -- at times, it's like watching a one-act play -- as do many of the performances. (Byrne, Wiest, Underwood and others are accomplished stage actors.) There is a literary layering of characterization via the emotional barriers that Paul and his patients have to break through, in how they reflect each other, or how, in a way, they serve as manifestations of Paul's psyche. A pointillistic quality comes through in the brief prologue that opens each show, or the seemingly trivial knickknacks in Paul's study that often come to serve as totems during the therapy process. And there's Hollywood drama in many of the show's big moments, in the overall thrust of the main plot, in the obstacles that Paul must confront.

Occasionally there is a little too much Hollywood dime-store psychology, mainly in the Laura-centered episodes that kick off each week. I get the idea behind the character, a rational-minded physician in her work who is a self-loathing and reckless in her personal life, a damaged beauty meant to draw out Paul's savior complex. But the two sides never come together (a brief scene on the job might have helped); and Melissa George, among the most mannered of actresses, never met a tic she didn't like. George aims for merely unstable and instead comes across psychotic; whereas Blair Underwood suggests a decent person behind Alex's aggressively unreflective facade. As the mismatched Jake and Amy, Josh Charles (who has come a long way from Dead Poet's Society) and Embeth Davidtz (far from Schindler's List) build an effectively jarring discord, sitting farther apart on Paul's couch the further their relationship deteriorates. 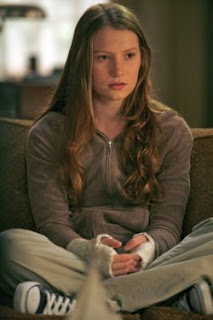 The most magical sessions, though, are between Paul and Sophie. The extraordinary young actress Mia Wasikowska doesn't quite have the physique of a gymnast (the actress actually studied ballet), but she's every inch the troubled teen. A child of divorce who idolizes her distant father while loathing her fragile mother, Sophie's problems appear to be rooted in a particularly sordid social issue; so it's a surprise that the truth, when Paul uncovers it, turns out to be more complex and mysterious. Sophie is an insecure person who feels in control only while on the high beam, and Byrne and Wasikowska pull off a remarkable balancing act between scenes of enormous emotional intensity and passages so quiet you can hear the actors breathing.
By now Dianne Wiest could probably be nominated for something by sitting on a toilet seat, so it was fairly predictable that she took home an Emmy for playing Gina. Wiest is fine, if a little overstudied (as she often is); she has good moments now and then that don't quite add up to a complete character. I was far more impressed by Michelle Forbes as Paul's disaffected wife, Kate. Forbes is a stunner (whose high eyebrows have unfortunately typecast her in sci-fi fare like Star Trek and Battlestar Galactica), yet she's a mix of low self-esteem and percolating fury when Kate joins Paul for sessions with Gina, with a barbed spontaneity that produces some well-timed laughs. (After Paul confesses his feelings for Laura with bunglingly pompous yammerings about "erotic transference," Kate takes this in and blurts out, "Did you fuck her?") But the most acclaimed (as well as justifiably Emmy-winning) performance from last season came from Glynn Turman as Alex's angry, guilt-ravaged father. We had been well-prepared for the character from Alex's sessions, and within one thirty-minute episode Turman conveys a whole personality -- ingratiating, remorseful, terrifying -- that encompasses an entire lifetime. It's a breathtaking turn, one of the finest pieces of acting I've seen in any medium. 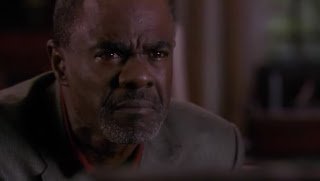 With In Treatment struggling in the ratings (Season 2 is currently in progress on HBO), I probably should emphasize more just how funny the series can be at times, such as Sophie's priceless reaction when she learns Paul knows nothing about the Harry Potter books. (For a minute, she becomes a little girl again.) Moments like these provide a respite from the drama, which builds almost imperceptibly until Paul, when his mojo is working, brings it to the surface. In Treatment's creator, Rodrigo Garcia, hasn't received enough credit for how (mostly) seamlessly the show weaves together so many disparate elements -- from humor to pathos -- or for the sublime quality of its direction, music and production design. The miniature wave-machine on Paul's desk also functions as the image over the opening credits, its gentle rocking a lovely metaphor for the sensation one feels at the end of an episode. I've always loved TV shows (and films) that create the illusion of a world that exists beyond the frame, and In Treatment achieves this feat and more. It enables us to see our world with new eyes.
Posted by Craig at 2:24 PM