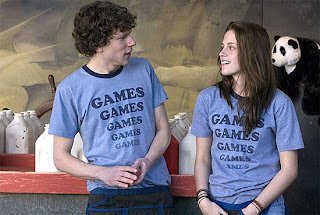 Early in Adventureland, the best movie in years about the travails of growing up, a twentyish Oberlin College graduate named James (Jesse Eisenberg) begins his first day on the job at the titular amusement park in his hometown of Pittsburgh (the year is 1987). An all-around bright guy and sensitive soul (read: virgin) whose parents' economic fortunes have taken a Reagan-era downturn, James desperately needs to make some summer cash before starting graduate school at Columbia in the fall, and finds himself at the one establishment willing to look past his overqualifications. He learns that Adventureland's dispirited young working stiffs, who spend most of their interminable days drinking booze and smoking pot, are divvied up into operating either "Rides" or "Games." Although James angles to join the ostensibly sexier "Rides" division, his new boss (Bill Hader) sizes him up and says, "You look more like a 'Games' guy to me."

It's no overstatement that Greg Mottola, who wrote and directed the picture, knows this terrain the way John Ford knew Monument Valley. He doesn't push the pop-culture references, instead allowing the elements (clothes, music, language) to build organically, and he skillfully weaves the social frictions of a blue-collar town (between rich and poor, Catholics and Jews) into the amusement park's fragmented environs.
Yet Pittsburgh is also a city linked by bridges, and James finds a tenuous connection with Em (Kristen Stewart), a lovely but troubled "Games" girl and NYU undergrad who is having a surreptitious summer fling with Connell, Adventureland's slightly older -- and slightly married -- maintenance man (and I never thought I would write these words) well-played by Ryan Reynolds. James's emotional directness and vulnerability simultaneously lures and frightens Em, and unwittingly attracts the interest of the park's reigning Madonna-wannabe, Lisa P. (a wild breakthrough performance by the former Russian Olympic gymnast Margarita Levieva). 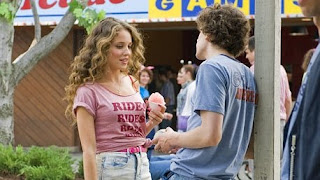 Like all good filmmakers, Mottola understands that the way to make a predictable set-up seem fresh and surprising is to emphasize the journey more than the destination, and to give the audience capable guides leading the way. I've seen Eisenberg in three films now, and he's been remarkable in each of them. In Roger Dodger, his fresh-faced naivete effortlessly won over the babes his ladies-man uncle labored in pursuing, whereas in The Squid and the Whale he fearlessly portrayed an obnoxious teen intellectual who couldn't get a grip on his own pretentions. His James in Adventureland is a deluxe combo of the two, a young man whose innocence has some rough edges (he becomes the park's unofficial marijuana distributor) yet whose cynicism is undercut by a kind of dogged hopefulness. Eisenberg finds an ideal partner in the raven-haired Stewart. I missed her big splash in last year's teenage-vampire smash Twilight; but here, as a darker version of Linda Cardinelli's Lindsay Weir from the also-'80s-set 1999 TV series Freaks and Geeks (at one point even wearing an identical green Army flak jacket), she makes Em's conflicting emotions achingly tactile.

At least one other review has compared Adventureland to early Cameron Crowe, and if Mottola can't seem to flesh out his grown-up characters beyond caricatures (as Crowe did with Frances McDormand in Almost Famous and John Mahoney in Say Anything), his sensibility is just as warm, his worldview as expansive. This is evident in a deeply funny scene where James takes Lisa P. on a date to a fancy restaurant (a clear homage to a similar set-piece in the Crowe-scripted Fast Times at Ridgemont High) and both fumble to a near-connection despite their disparate backgrounds and interests. Mottola also has Crowe's virtue (and occasionally a weakness) in refusing to pass judgment on a character who would normally be the bad guy. Reynolds' Connell is a kindred spirit to Matthew McConaughey's Wooderson, the fading football star in Dazed and Confused (and that film's director, Richard Linklater, another obvious influence on Mottola), but who comes to embody even more pathos when we learn that his mystique is largely unearned. (Connell is an aspiring musician who claims to have once jammed with Lou Reed.) Unlike Jeremy Sisto's tiresome cartoon of an adulterous husband in Waitress, Reynolds never pushes for effect. There's pain and disappointment etched across his face, and the uneasy friendship he establishes with James -- a serious competitor for Em's affections -- is genuine in a way that I Love You, Man's facile depiction of male-bonding never comes close to reaching. 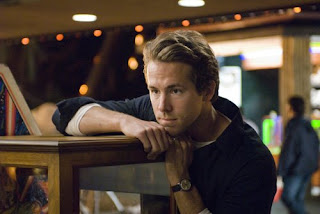 As Crowe and Linklater eventually accomplished, Mottola is growing more skilled behind the camera. I wasn't a big fan of the non-McLovin passages of Mottola's Superbad, but it's clear that he used the success of that picture as cache to make a more personal film here. (One which, like Say Anything and Dazed and Confused, may not be an initial hit, but I predict will build an ardent following over time.) He creates an authentic theme-park locale, finding beauty behind the gaudy surface tackiness. There's a gorgeous image of James and Lisa P. lounging hopelessly stoned on a Teacups ride with the city fading to dusk on the horizon behind them, and another where Em and James watch fireworks burst overhead on a Fourth of July evening. In scene after scene Mottola evokes emotion without sentiment, memory without nostalgia. And he has enough confidence not to oversell the movie's theme: that one can still come to find a place in life, even with the games rigged and the rides dangerous.
Posted by Craig at 1:30 PM

Nice review. I finally got to this movie today. A few comments ...

* "He doesn't push the pop-culture references..." That's exactly right! The music, the cars, the clothes, it all fits, but the movie isn't held together by these things the way that so many flashback films are. It's all so organic here.

* "I predict will build an ardent following over time." I think that's a great call. This is one of those movies that I predict won't finish in my top 10 of the year but will probably be among the top 5 movies from 2009 that I want to watch in the years to come.

I think this is my "Generational Movie." It finally arrived.