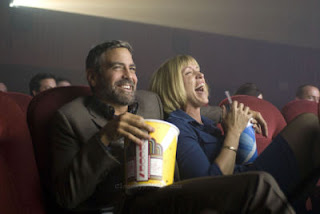 Well, what can one say about Burn After Reading, the latest oddball head-scratcher from the Coen brothers? Is it a good movie? No, but it has its moments, several from Brad Pitt as the dim-bulb naif who works at a Washington, D.C. fitness center, a handful from Frances McDormand playing against type as his selfish colleague desperate for cosmetic surgery and a romantic relationship, and a choice few from John Malkovich as the hot-headed CIA analyst the pair foolishly attempt to blackmail. Is it a comedy or a thriller? Like most of the Coens' films, it occupies a netherzone between the two: comedies are typically funny and thrillers try to be thrilling, and Burn After Reading is mostly neither. As the neurotic, sexed-up federal marshal who gets involved with both McDormand and Tilda Swinton as Malkovich's ice-queen wife, George Clooney is fitfully amusing but generally fails to register. That seems to be the point, as much of the important action occurs offscreen, with a pair of exposition-heavy CIA bureaucrats (J.K. Simmons and David Rasche) filling in the blanks for us. No Country for Old Men was the first Coen movie (okay, maybe Fargo too) where I felt as though the characters had lives outside the frame, and Burn After Reading, in its own peculiar way, continues this trend. Perhaps, like Wes Anderson's The Darjeeling Limited, it'll be a transitional film that moves its makers out of their own hermetically-sealed film-nerd existence and into something resembling how real people think, act and live.
Posted by Craig at 1:26 PM