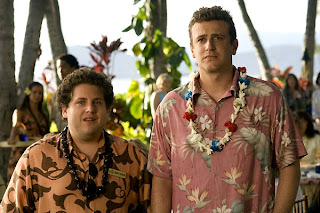 Repeat after me, Hollywood: the key to screwball comedy is speed. Speed in length and structure, speed in snappy dialogue, speed in a nimble central character. Jason Segel, who had an appealing presence within the ensemble of Freaks and Geeks, is the dumpy lead in Forgetting Sarah Marshall, harmless and flaccid, as is the script he wrote for it. Segel's Peter Bretter goes through what is on the surface a prime screwball farce, getting dumped by his blonde-bunny actress girlfriend (Kristin Bell, playing the titular character), then running into her while on the rebound during a Hawaiian vacation. A variation of this plot was accomplished in a classic two-part Frasier episode about ten years back. The writers of that show were obviously students and fans of jerry-rigged comic contraptions from the diverse likes of Noel Coward, Billy Wilder, Preston Sturges and heyday Hepburn and Grant.

In contrast, the Judd Apatow gang has created a new kind of comedy that slows down the pacing in order to open up room for its performers to improvise. This worked liked gangbusters in Knocked Up, which showcased Seth Rogen's scuzzy charm and stentorian voice. Segel's speciality on Freaks and Geeks -- abject humiliation -- gets the full workout in Forgetting Sarah Marshall, and he certainly gets points for equal-opportunity nudity; but he isn't dynamic enough of a performer to hold the film together, and most of the surrounding actors -- especially Bell and Mila Kunis's comely hotel clerk, who form the other two sides of an unconvincing triangle -- have little to play with. Only Russell Brand as the unapologetically epicuran British rock star Aldous Snow, who first steals Peter's girl then later befriends him, has the mischief and high spirits of true farce. 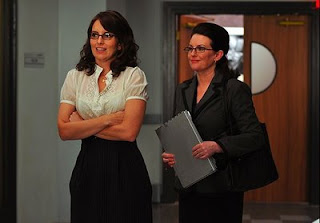 As previously Frasier and now 30 Rock have shown, screwball comedy has migrated to TV sitcoms, which have no time or need for tedious exposition and interminable explorations of their characters' "feelings." Last season 30 Rock became increasingly surreal, climaxing in a dizzying finale that featured Jack Donaghy (Alec Baldwin) and Matthew Broderick's hapless head of Homeland Security inadvertently detonating a "gay bomb." Disappointingly, this season's premiere -- now available on Hulu and airing officially on NBC next Thursday, Oct. 30 -- barely addressed any of the events that preceded it.

The episode, appropriately called "Do-Over," had its moments, mainly involving Jack's return to NBC and speedy rise from mailroom clerk back to upper management within a day's work. Yet the show had more predictable beats -- Liz (Tina Fey) wants to adopt a baby, the adoption agent (the always amusing Megan Mullaly) sternly disapproves, everyone at the office behaves unwittingly at their worst while Liz is under review, hints of a burgeoning Liz-Jack romance -- and both that and the lack of political satire carried the suggestion of network meddling, a misguided attempt to make the show more familiar and "likable." While a hard-to-peg, abysmally low-rated series like 30 Rock has always been something of a hard sell, Tina Fey's recurring run as Sarah Palin on Saturday Night Live has pretty conclusively demonstrated the actress's ability to offer up charm without sacrificing bite. It's unclear whether NBC should have more balls or more faith.
Posted by Craig at 1:04 PM