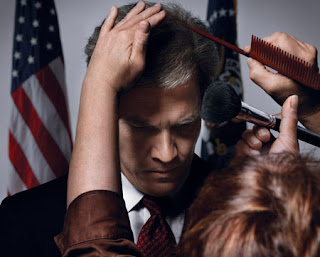 Oliver Stone's astonishingly entertaining W. is a film that shouldn't work. Its main character, our standing president (played by Josh Brolin), is callow and shallow. The ensemble surrounding him -- familiar faces Dick Cheney (Richard Dreyfuss), Donald Rumsfeld (Scott Glenn), Condoleeza Rice (Thandie Newton), George Tenet (Bruce McGill), Colin Powell (Jeffrey Wright), Laura Bush (Elizabeth Banks), and of course George "Poppy" Bush Sr. and "Barb" (James Cromwell and Ellen Burstyn) -- isn't fleshed out with any shocking revelations. The screenplay, by Stanley Weiser (who collaborated with Stone on Wall Street) hits the expected marks -- from Dubya's Yale binging to the Iraq War -- while bypassing potentially meaty subjects altogether, both election victories and 9/11 among them. Arguably W.'s biggest flaw, brought up by some critics, is that it's simply too soon to get enough perspective on the impact of the incendiary Bush Presidency. That's a valid point: Stone's Nixon (1995) benefited from two decades of distance from its controversial subject, and looks even stronger today. Yet Stone and Weiser attempt something with George W. Bush that is quite canny: knowing how much of the man has already been reduced to easy caricature, they bring us closer to him than we might like, forcing us to confront our prejudices without letting him off the hook.

That's the crucial element. Critics of Bush, myself included at times, typecast him as either a buffoon or one of the evildoers he often speaks of with squinty-eyed loathing (or, nonsensically, both simultaneously); defenders of Dubya, even when acknowledging his mistakes, like to pin the blame on Cheney and Rumsfeld, viewing the President as though he were basically a good boy who got into detention because he fell in with the wrong crowd at school. An early scene in W. depicting a booze-fueled fraternity hazing at first appears to suggest this until we see just how cunningly Bush panders to his Yale peers, remembering not only all their names but their nicknames as well. Yet unlike Bill Clinton, he's never desperate to be liked. Seething resentment against his father -- and being compared unfavorably to his slicker younger brother Jeb (Jason Ritter) -- is ultimately what propels him: to drink; to rebel; to be born again; and to invade Iraq.

Expectedly, this Oedipal conflict is driven home a bit too hard. Like Steven Spielberg, Oliver Stone's cinematic product suggests strong daddy issues; unlike Spielberg, whose recurring motif is paternal abandonment, Stone's theme from Wall Street through Alexander has been about the claustrophobic shadows that fathers cast over their sons. The memorable scene in Wall Street where Bud Fox is confronted by his father (an ingeniously cast Charlie and Martin Sheen) in an elevator shouting match is effectively replayed in W. as a brouhaha between a drunken Bush Jr. having it out with Poppy in the latter's living room. Yet if Dubya's motives are explained a little too simplistically, the relationship between the Bushes is given the complexity it deserves. James Cromwell, who can either be a bad actor or a terrific one, finds the exact balance between love and exasperation that I recall seeing in the real George Herbert Walker Bush on the 2000 election night: When asked by a reporter how he was feeling, Bush Sr. replied in his characteristic singsong, "Nervous....nervous and proud."

The infamous Florida debacle of that occasion is afforded only a cursory mention in W. While it's a relief that the film doesn't descend into the kind of left-wing smugness Hollywood is often accused of by Red State America, and on display in HBO's Recount which I caught up with recently on DVD, it does leave a gap in our understanding of how much Dubya is a pawn of his advisers and how much of his decisions are of his own making. Karl Rove (Toby Jones), depicted in W. as a cross between Iago and a leprechaun, is instrumental in mentoring Bush on how to not be "out-Texased and out-Christianed," but more details on their dynamic, such as how it applied to the 2004 campaign -- where Bush, a National Guard deserter, was widely regarded as a paragon of machismo while his opponent, a decorated war hero, was smeared as a wimpy fraud -- would have illuminated the central question of both the man and the movie: How much of W. is indeed "The Decider" he claims?

We don't get an exact answer, though Cheney, Rumsfeld, et al are depicted pushing the case for war against Iraq, each with different aims. Nor, on a less significant note, is it entirely clear why ESPN and Hardball are inexplicably given pseudonyms in the film ("Sport Cam" and "Spinball," respectively). For everything that happens in W., enough of it occurs in interiors to suggest that the filmmakers had a relatively small budget to work with. Yet whatever limitations they had may have become assets in terms of forcing Stone to pare down his famously overheated style. Gone are the multimedia excesses (however much I enjoyed them) of JFK, Nixon, and Natural Born Killers; in W., Stone employs deceptively basic set-ups, alternating between unobtrusive hand-held cameras for the wayward early Bush and plants the camera on a tripod for the more dangerously sure-footed presidential years. It's telling that the film's one foray into surrealism -- a recurring dream sequence of Bush in a baseball stadium -- doesn't work.

It would be tempting to hail W. as a sign of "maturity" if it weren't for the fact that, beneath his reputation as a drug-fueled hothead and propagandist, Oliver Stone has always been a thoughtful artist. Only slightly less ridiculous than the still-present media dismay that a filmmaker like Stone might now and then take dramatic liberties with facts is the chorus of surprise about his "sympathy" for somebody as despised as Bush. Stone's body of work shows deep empathy for a vast array of subjects (if admittedly not always for women or foreigners, though his troubling misogyny and xenophobia have tempered over time); look beneath the visionary technique and rabble-rousing and he's as square as Frank Capra, at times overly respectful and idealistic, a true believer in the American Way. In interviews and on director's commentaries of his movies Stone conveys an encyclopedic knowledge of history and is generous with praise for his actors. (W.'s cast, as in all of his films, appears to be having a grand time.) In W., what has been largely obscured is now nakedly evident, no less than in the remarkable scene of Bush's born-again conversion, where he collapses while jogging, and subsequent passages that take his faith seriously rather than depicting it mockingly or cynically. Through pointed yet low-key metaphors -- a blind dog, a funny scene where Bush leads his staff down a wrong turn along a country road -- the film captures the myopia of unreflective religious zeal, how the path to hell, as they say, is paved with good intentions. "Compassion for the man, yes, but a greater compassion for our country," Stone has written in an ongoing debate. Eloquent words from a director who portrays an ineloquent man with calm and grace.
Posted by Craig at 1:01 PM