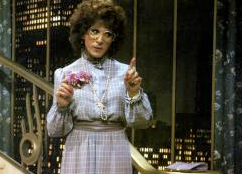 Never work with an Oscar winner shorter than the statue.--Larry Gelbart

Ah, but thank goodness Larry did, or he wouldn't have given me my purest comedy moment.

It wasn't just him, of course. Half the WGA is rumored to have worked on Tootsie--Gelbart, Elaine May and Barry Levinson among them. And Sydney Pollack, a director with a previously undetected sense of humor (the laughs of Random Hearts and Harrison Ford's stud earring came later), kept the pacing crisp and the camera jumping for the gag, as Pauline Kael put it. Add to that a phenomenal supporting ensemble--Jessica Lange, Teri Garr, Dabney Coleman, Charles Durning, George Gaynes, Doris Belack, Bill Murray, Geena Davis, and Pollack himself--each actor at the top of his or her game. And last but not least, Dustin Hoffman himself, in one of the most astonishing magic acts of his career, playing essentially three characters: Michael Dorsey, boorish unemployed actor; Dorothy Michaels, charismatic soap-opera star; and Emily Kimberly, popular character on the soap whom Michael-as-Dorothy portrays.

Nothing against Judd Apatow's freewheeling, semi-improvised, eye-of-the-hurricane style, but Tootsie is the greatest modern showcase of the strengths of classical comedy structure. The transformation of Michael Dorsey into Dorothy Michaels, laboriously set-up and overexplained if had been made today, is streamlined through a funny, no-frills jumpcut early on. (The more implausible the scenario, the better it is to get through it quickly.) Jokes are set up in the first half of the film that pay off in the second. And the tension that tightens inexorably around Michael's keeping his secret identity as Dorothy comes to a catharisis in an ingenious moment of revelation.

The moment comes when the soap that Michael is on (and by this point, desperate to leave) is forced to shoot a major scene on live television--a dinner party in Emily Kimberly's honor--and he seizes the opportunity to break from his scripted lines and improvise his way to revealing Dorothy's true identity.

EMILY KIMBERLY: Well, I cannot tell you all how deeply moved I am. I never in my wildest dreams imagined that I would be the object of so much genuine affection. It makes it all the more difficult for me to say what I'm now going to say. Yes. I do feel it's time to set the record straight. You see, I didn't come here just as an administrator, Dr. Brewster; I came to this hospital to settle an old score.

The beauty of Michael's solution is that he reveals himself in character, by giving Emily a secret which, however absurd, works within the tradition of soap opera conventions. What makes it even funnier is that he hasn't thought it through in advance and so has to fumble his way forward, to the horror of cast and crew.

EMILY KIMBERLY: Now you all know that my father was a brilliant man; he built this hospital. What you don't know is that to his family, he was an unmerciful tyrant - a absolute dodo bird.

RON CARLISLE: (the show's director, played by Dabney Coleman, in the booth) Oh, no. Not live!

"Emily" continues with her tale, which develops into a convoluted backstory: how her father drove her mother to drink before she died in a tragic drunken horseback riding accident; how her parents had two children, a reclusive son named Edward and a daughter who got pregnant at fifteen, fled into exile, and raised the girl as her sister before dying of a hideous disease; how the girl's daughter came to work at the hospital, where she was despised for being a do-gooder.

By now the audience with which I first saw Tootsie on its initial release was laughing so hard you couldn't hear half the lines. And, the fact that I was only twelve years old, I didn't really understand everything that was happening either. But no matter: I laughed my ass off anyway. I crack up every time I see it. It's my favorite comic moment in a movie.

At this point I will stop transcribing the scene and let you enjoy the rest of it yourself. Only note how each character has a distinct reaction to Dorothy's big reveal, how all of them are given their moment. Finally, I should add that the scene below cuts off before Julie's (Jessica Lange's) moment. I always hated William Goldman's dismissal in one of his books of Lange's performance. Far from a "little cameo," she creates the most genuine human being in the movie. She gives Tootsie its sweet embrace--but not before a slug to the stomach.

I atually cracked up reading this post, even before I got to the video. I've seen Tootsie about five times and I end up crying with laughter every single time. My other favourite scene is when Lange finally confronts "Dorothy" and tries to pick up the phone to call her dad.

After reading your excellent review of the movie Tootsie I was reminded how enjoyable it was. Until now I didn't realize that the picture was an inside view of the workings of a soap opera. At the time, I felt Dustin Hoffman was the best female impersonator, and that hasn't changed. Thanks for adding the movie to your The Man From Porlock because now I want very much to see it again

The entire evening of Dorothy babysitting, "coming out" to Julie, receiving a marriage proposal from Les, being accosted by the old drunk actor, and yelled at by Sandy is a brilliantly funny nightmare.

I wasn't really aware of the soap opera stuff first time I saw it. I've never watched soaps, so I still don't, but I get the overwrought plot twists that come with them.