To the Last Drop 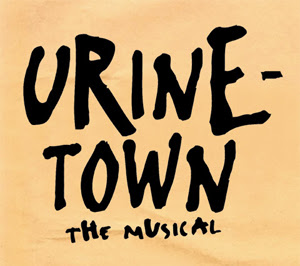 Pity that Stanley Kubrick didn't live long enough to adapt Urinetown for the screen--the Master of the Bathroom Scene would have had a field day with the subject matter and its ultimately pessimistic, satirical edge. Such is life, I did catch my local university's stage version, and it holds up to a high standard of quality. Other recent productions--Shakespeare's The Winter's Tale (helmed by guest director Vincent Dowling) and Stoppard's Rosencrantz & Guildenstern are Dead--were wonderfully performed and imaginatively staged in our small interior theater-in-the-round, but both clocked in at just under three hours, a long time to be sitting in a squeaky chair. Urinetown, is, at approximately two hours, a swiftly paced account of a power struggle between the pees and the pee-nots in a town facing a twenty-year drought. (The former force the latter to pay to use regulated toilets.) While not particularly memorable, the musical numbers are lively and funny; and while not particularly deep, the characterization of the "revolutionaries" who attempt to overthrow the Draconian rule of the proprietors of the town's water supply is pretty biting. I'm a sucker for the kind of vaudeville humor in the scenes within archvillain Caldwell B. Cladwell's office. And I choked out a laugh during the final scene, when a dying-of-thirst old lady begs for a glass of water and the delusionally idealistic female protagonist smiles sweetly and replies, "There's a glass of water in your heart."
Posted by Craig at 7:37 PM

Craig,
"To the Last Drop" is a very funny title for this topic...

I have a question about your comment here about Stanley Kubrick being the Master of the Bathroom Scene. And you said in another post that a thesis could be written about Quentin Tarantino's use of bathrooms in his films. Is this a theme these two directors share?

Kubrick and Tarantino don't have much in common, but both have shot pivotal scenes inside bathrooms for many of their movies. I can't recall the source, but somebody once wrote that it was too bad Kubrick never made a film with Tom Hanks, the latter being, I believe still, the record-holder for the longest cinematic pee (in A League of Their Own). "Think of the magic they could have made together," the person wrote.

I promise I'm not as fascinated by this subject as it may appear. Really.