Oh, Brother (Warrior and The Trip) 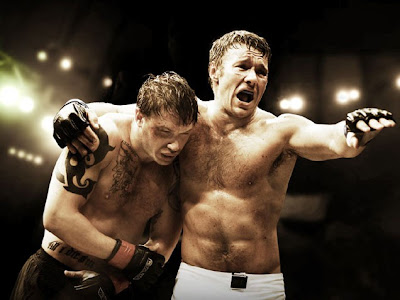 The Deer Hunter of Rocky movies, Gavin O'Connor's 140-minute pseudo-epic Warrior (2011) makes grandiose claims to the meaning of America: Imagine Stallone and Dolph Lundgren taunting each other in the ring with Russian roulette trigger-pulls rather than punches and you have an inkling of this film's self-regarding machismo. (Hmmm, Russian roulette: such a Franco-Commie ring to it; let's call it "Freedom spins.") O'Connor's twist on the go-for-it inspirational sports genre follows not one character or team but estranged brothers - the Conlons - on parallel tracks toward duking it out in the ring (or cage) for a cool few million that each desperately needs. We know Warrior is a serious film because it's always telling us it is, as sure a sign of trustworthiness in cinema as in life.

As the older Brendon, Joel Edgerton gives a good performance, bringing a few incongruous personality strands (talented high school physics teacher, happily married husband and father) into an aging bruiser who, for all his intellectual proclivities, likes to pummel and get pummeled. As younger Tommy, the ripped, tattooed Tom Hardy gives a good pose. Tommy is your standard tough-guy screw-up head-case prodigy played by an actor who's taken too many rides at A Streetcar Named Desireland. A veteran of the Iraq War, it's revealed that the seemingly self-centered Tommy heroically saved the lives of fellow soldiers, no easy feat when you're constantly admiring yourself in a hand-mirror.

Because complications are the mulch in which cliched narrative grows, it's eventually revealed that secretly sensitive Tommy is an AWOL coward too, though somehow this crucial piece of news fails to faze his cheering throngs in the slightest. (The military police whom we are told are waiting to take Tommy to the stockade after the championship bout - why wait? - are also conspicuously off-camera.) Also included is a Burgess Meredith/Pat Morita trainer/mentor in the form of their father, Paddy Conlon, an alcoholic on the wagon. As always, Nick Nolte transcends stereo-typecasting. Hints of abusive parenting abound: Brendon won't let Paddy see his grandchildren; Tommy rejects him as a father but lets Paddy train him again because "You were always good at that much." Actually, it's not clear exactly what makes Paddy good at training, especially since the strategy-free Tommy, who knocks out his opponents within seconds, doesn't seem to need any help. But Nolte sells the character's savvy (he has a great scene where he guesses the number of pill containers stashed in Tommy's jacket based on sound), his hope for reconciliation with both sons (and that they reconcile with each other), his fear of failing them again (giving the same number of days he's been sober even though more time has elapsed).

Yet another filmmaker who assumes shaking the camera automatically creates an atmosphere of grit and authenticity, O'Connor sells much harder than Nolte and far less convincingly. I know nothing about the movie's phenomenally popular "sport," which I believe is called Chop-Sockey Hit-Hockey, but like video games, Kim Kardashian, and The Big Bang Theory, I'll give the benefit of the doubt that millions of people are into it. Where Warrior fails is persuading me why I should be into it. Rather than genuinely take us into the world of its subject, the movie offers a very superficial rendering, coming on hot and heavy to body-slamming the audience until it acquiesces its love. 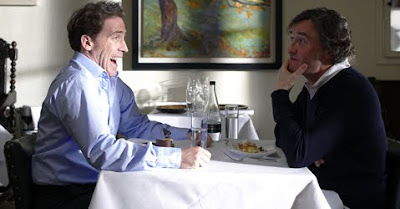 Steve Coogan and Rob Brydon aren't siblings, but in The Trip (2011) they convey a sense of exasperation laced with affection that feels lived-in, the product of a friendship-cum-rivalry extending over several years. In Michael Winterbottom's mischievous funhouse comedy Tristram Shandy: A Cock and Bull Story (2005), Coogan and Brydon played versions of themselves, a relatively famous British comic actor and his less-famous sidekick, working together - and with a larger cast - on an adaptation of "an unfilmmable novel." (The novel's unfilmmability became the movie's subject.) In The Trip, a comic road-movie (edited from a multiple-part BBC series) wherein the principals sample the best restaurants in England, Winterbottom deepens the implications of the Coogan-Brydon relationship from the earlier film into ruminations on aging and belonging. It's a light venture, and while I wouldn't assume that their portraits are strictly autobiographical - they're too cagey as performers for that - the contrast between Coogan's haggardness and Brydon's content becomes sneakily affecting.

Now in his mid-40s, Steve Coogan plays himself as an egotistical bad-boy unable to shake the Alan Partridge persona that made him (in Britain) a star. He also can't rid himself of more self-destructive attributes - drug-addiction, womanizing - that surface during his tour through the English countryside. Although the same age as Coogan, the Rob Brydon of the film is emotionally stable, happily married, and fairly well-known in his own right, a sidekick who won't be pushed aside. Coogan's competitive insecurities inevitably flare up around Brydon: his face falls hilariously when the latter is recognized instead of himself; or when Brydon, a dazzling impressionist, reveals that one of his "voices" has become an iPhone app.

One of the funniest moments in Tristram Shandy occurs when Brydon, apropos of nothing, launches into a Pacino riff. ("FFFFffffuck YOU!") Much of The Trip - perhaps too much - is devoted to Brydon's impressions (Michael Caine, Sean Connery, Roger Moore, and others) and Coogan's attempts to one-up him. Beneath these deceptively casual bull-sessions is a festering jealousy, yes, but also genuine admiration and a spirit of creativity and play. Winterbottom has that same spirit: He stages a couple of inspired dream sequences (one with an American movie star got all the attention from critics, but I preferred a more subtle yet revealing fantasy involving a newspaper headline), and his visual sense remains as acute as ever. An image from Tristram Shandy that has stuck with me in the years since I first saw it features an ensemble of bit players dressed like Ancien Regime soldiers running with sparklers at a late-night party. From the interiors of the restaurants to the food on the tables to the expansive settings in nature, The Trip is equally gorgeous. Also, in moments like one where Brydon keeps a respectful distance on a couch from a young female fan, Winterbottom conceives his shots to convey information about his characters. And he does it again at the end, in a scene reminiscent of the conclusion of Local Hero, when Coogan, alone in his spacious apartment, and affected by his journey more than he realizes, makes a decision, places a phone call, tries to connect.
Posted by Craig at 4:10 PM