The Eyes of Others (Mysteries of Lisbon and Young Adult) 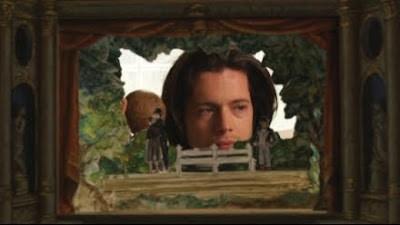 It's a shame that my first encounter with Raoul Ruiz is his last movie, Mysteries of Lisbon (2010), but then again that's something the legendary Chilean director might have approved of, what with his elastic concept of time. Ruiz passed away a year ago, and his final film can be viewed as the fever-dream of a child or the memory of a dying young man. Those aren't nearly the only interpretations. A 254-minute 19th-century historical epic edited from an original six-hour Portuguese miniseries, Mysteries of Lisbon has the sweep expected of elaborate costume dramas yet practically none of their formality. It's a remarkably casual, liberating film, with a narrative riddled with hidden pockets and trap doors. It's easy to get lost along the way, but Ruiz makes your occasional puzzlement worthwhile: every frame is beautiful.

Echoes of Dickens (orphaned boy inherits wealth, reunites with mother) have been thoroughly examined by others, as has Ruiz's longstanding fascination with Proust. If I'm focused more on the latter it's for having just read Swann's Way (a.k.a., Vol. I of Remembrance of Things Past). Mysteries of Lisbon (based on a novel by Camilo Castelo Branco) leaps repeatedly to the past through flashbacks recounted by bit players, featuring characters that the protagonist has never met, but whom he gradually learns have had an indelible influence on his life. A countess obsessively in love, a priest with a shady past, a licentious aristocrat who may be more noble than he seems - these are just a few of the film's massive ensemble, all of whom are watched (by servants, by others) in nearly every scene.

What's refreshing about Ruiz's approach is that he makes the theme of watching or being watched not about what you would expect from the genre. Mysteries of Lisbon is less concerned with the stifling need of the upper-class to keep up appearances (a topic, I must confess, I'm getting tired of) than it is with the idea that our appearances, regardless of class, are in constant flux. He underlines this in playful ways: at least a couple of actors play apparently different roles at different times; another performer, in comic relief, directs his double-takes toward the camera. The movie is about mannered behavior without being mannered itself; even the obligatory climactic duel departs from expectations. Raoul Ruiz may be gone, but he has left us a movie that breathes. 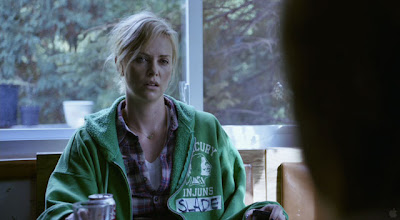 I've panned plenty of films since the start of this blog, but few have overtaken me with the urge to claw at the screen quite like Juno, the first collaboration between screenwriter Diablo Cody and director Jason Reitman. A comedy about a pregnant teenager who gives up her baby for adoption, wisecracking all the way to the cutting of the umbilical cord, Juno was applauded by many and won Cody an Academy Award, but for me the the movie's tone - which could be described as "tragic cutesiness" - along with its endlessly snarky dialogue, were about as heartfelt as toxic waste. Since then Reitman has built an unearned rep as a modern-day Billy Wilder with Up in the Air, while Cody - the progenitor of a Showtime series (The United States of Tara) and a disastrous horror-comedy (the Reitman-produced but wisely not-directed Jennifer's Body) - became a self-anointed media phenomenon, with enough of a martyr complex in response to criticism to rival Kevin Smith.

The dynamic duo returns - as calculating as ever - with Young Adult (2011), a shallow poseur's notion of a confessional. The semi-autobiographical elements of Cody's schema click into place: a Minneapolis author of YA fiction (Charlize Theron), unhappy with work and life, receives news of her high-school boyfriend's newborn baby, then returns to her hometown of Mercury, MN to win him back. The parallels between fact and fiction aren't completely literal: whereas Diablo Cody is the rare screenwriter with name recognition - even a brand-name - Mavis Gary (Theron) is actually a ghostwriter, which seems like a needless layer of complication until you realize that the movie is bizarrely underpopulated and jam-packed with lack of incident. Mavis tries to steal Buddy (her married ex) back, and that's it; the fact that he's played by Patrick Wilson, go-to-guy for male suburban malaise since Little Children and the most boring actor in America, yields no compelling developments.

The filmmakers have been lauded for creating an unlikeable protagonist in Young Adult, but that kind of bravery is admirable only when there's integrity behind it. Time and again, Cody shows no interest in comic logic or consistency. Mavis is portrayed as a languid drunk, yet somehow has the discipline to write a popular series of books. (Plenty of published authors have been alcoholics, but none had the sloth-like qualities of this one.) She's also a narcissist - one, whom we learn, looked at herself in the mirror in high school more than at anybody else - yet inexplicably is an astute enough listener to accurately capture teen patois. (This is Cody at her most self-flattering: the unvarying voices of her characters are entirely her own.) David Edelstein pointed out another head-scratcher: When Mavis reunites with Matt (Patton Oswalt), another high-school classmate and Mercury denizen, she fails to remember who he was even though (she then recalls) he was the victim of a highly publicized hate crime. Matt, who suffered serious physical injury from the assault and walks with a cane (and isn't gay, as his attackers assumed), is the patented Reitman-Cody feint at sincerity, borderline offensive yet achieved anyway thanks to Oswalt's authenticity. His is the best performance in the movie by a mile, outclassing Theron's hard-working yet miscast turn.

Theron can be a good actress; even in more commercial fare she never comes across as lazy like, for instance, Ashley Judd. But she can't bring the character's contradictory elements together, and other than Oswalt, she has nobody to play off. Young Adult is populated by the same breathtakingly uninteresting fringe characters who occupied Juno: whether former classmates or hotel and store clerks, they exist to either punch the protagonist or get punched back. (For a comedy writer, Cody is much more judgmental than observational.) The movie dawdles for ninety minutes before ending with a public confrontation between Mavis and her adversary, Buddy's wife (Elizabeth Reaser), who has insisted that Mavis stick around for no plausible reason. That's not completely true: the explicated reason, in front of Mr. and Mrs. Buddy's friends and neighbors, is they all feel sorry for her; the subtext, proposed afterwards by Matt's sister (Collette Wolfe), is they're all jealous of her success and wish that they could skip town too. (Reitman evokes Mercury with his customary professionalism - he keeps the camera usually still, a quality I'm growing to appreciate - yet the Staples and Chili's chains are trotted out as if to condemn small-town life, when I'm pretty sure Minneapolis has them too.) Either way, Young Adult may have made more sense had Mavis been the credited author of the YA series that was being ghosted for her: Mavis as insecure phony, then, would have been the film's subject, instead of an insincere portrait of an alleged genuine article.

I haven't seen Mysteries of Lisbon, but I think, respectfully, that you are a bit harsh on Young Adult. I found the film's dawdling and aimlessness to be refreshing. You do admit that Theron is good, and her work here is comparable to that of Linda Fiorentino's in The Last Seduction. Both characters are monstrous studies in citified self-involvement, but I couldn't help liking them and their movies for exploring such repulsive leads. Matt bothered me more because he seems more schematically damaged (in spite of Oswalt's excellent performance). I also liked Cody's willingness to take on such a doomed enterprise as Gary's attempt to undo her mistakes since high school.

I think you'll enjoy Mysteries of Lisbon, Film Doc. We'll have to disagree on Young Adult and Theron's performance; I thought she worked hard at the role but wasn't right for it. Since you brought up The Last Seduction - if only Mavis's schemes were half as interesting as Fiorentino's! That was a fun film noir and a fascinating character study. Fiorentino simultaneously plotted out all her moves and improvised brilliantly. Mavis's machinations go nowhere, the small-town rubes a step ahead of her at all times. Where's the fun in that? I never ask that a main character be likeable; I ask that she or he be compelling. Mavis doesn't seem particularly clever or talented, so why should we bother with her? It's The Half-Assed Seduction.

* "Mavis as insecure phony, then, would have been the film's subject, instead of an insincere portrait of an alleged genuine article."

Oh! You're onto something there!

And I think many of your analyses of Cody and Reitman are spot on, at least broadly speaking.

This, for sure, is true: "the Staples and Chili's chains are trotted out as if to condemn small-town life, when I'm pretty sure Minneapolis has them too"

And, now that I think of it, Patrick Wilson really might be "the most boring actor in America."

But I thought Theron gave the best female lead performance of last year, and where you read that she fails to bring the character's contradictory elements together, I think that's why she succeeds.

Which is to say that I don't have enough confidence in Cody and Reitman to say for sure that this was their intent, but what I found interesting about Young Adult is that it's impossibly contradictory and messy, and I thought Theron boldly explored all of those directions, embracing a character who is totally full of shit (which is easier said than done), and creating something that, true enough, didn't seem cleanly conceived but that as a result felt all too real, even in spite of her playfully exaggerated Norma Desmond meltdowns.

(BTW: Fuck blogger and how difficult it has become to get comments to publish these days; and yet more spam gets through than ever.)

But I thought Theron gave the best female lead performance of last year, and where you read that she fails to bring the character's contradictory elements together, I think that's why she succeeds.

You all give her a lot more credit than I do. Although, most of the problems I have with Theron's performance start with the script. Whether I'd have thought her better, who knows, but she's definitely game. She did teach me how to use saliva in a toner cartridge; unfortunately, that was within the first five minutes.