Color Lines (One False Move and Devil in a Blue Dress) 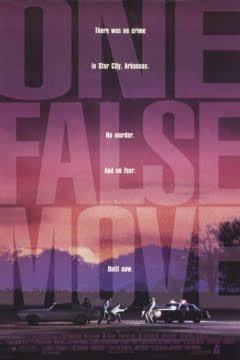 "Franklin had a mystical control in his first two movies, One False Move (1991) and Devil in a Blue Dress (1995); he knew when to draw the moment out and when to compact it mercilessly. (The climax of One False Move -- one of the most intense I've ever seen -- lasts all of thirty seconds and reverberates for hours.)" -- David Edelstein
***
Carl Franklin, a fine director, has had a hard go of it following a relatively celebrated debut twenty years ago. In a recent IU Cinema podcast on film criticism, I mentioned One False Move as perhaps the finest example of Roger Ebert and Gene Siskel's advocacy for below-radar films. Franklin's first movie certainly qualified: Without Siskel and Ebert's support, it likely would have been lost forever in straight-to-video limbo. As it happened, One False Move put its star, Bill Paxton, and co-star/co-screenwriter Billy Bob Thornton on the map, and garnered its director the prize of adapting to the screen Devil in a Blue Dress, the first novel of Walter Mosley's celebrated mystery series featuring post-WWII African-American detective Easy Rawlins. Despite good reviews, Devil was a box-office bust, and Franklin has worked along the margins ever since: the mediocre One True Thing and High Crimes; the breezy yet inconsequential Out of Time; and a string of TV credits (including "Peleliu Landing," one of the better episodes of HBO's disappointing The Pacific) all to his credit. Not a bad filmmaking career in all, especially considering how scant the opportunities are for African-American directors in Hollywood, yet nonetheless somehow unfulfilling of his early promise.
One False Move opens with a pair of violent thugs, Ray and Pluto (Thornton and Michael Beach) aided by Ray's girlfriend Fantasia (Cynda Williams), stealing a pile of cocaine and cash from some drug-dealing friends in Los Angeles. The sequence is initially disarming, then horrifying: the dealers, all African-American, live in a nice apartment rather than a stereotypically scuzzy bottom-dwelling, and are first seen videotaping their own buoyant party; after their uninvited guests tie them up and find the money and drugs, Pluto, a quiet, bespectacled, college-educated black man whose weapon of choice is a knife, casually stabs each of them to death. Franklin shows not a single drop of blood, and lets the videotape of the party -- with its participants dancing happily only minutes earlier -- play on the television in the background of the murder scene. Viewers of One False Move never forget this opening movement, yet it's astonishing how unexploitive it is. Franklin is unusually sensitive in depicting the loss of life, and his respect carries over through the rest of the movie. 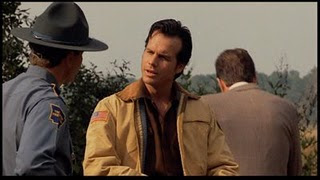 As Ray, Pluto and Fantasia hit the road, a pair of hardened LAPD detectives, Dud Cole and John McFeely (Jim Metzler and Earl Billings) crack grim jokes about killers with Disney names and quickly learn from the tape that the trio are headed for Star City, Arkansas, where Fantasia's family and infant son live. Cole and McFeely contact Star City chief of police Dale Dixon (Paxton), an excitable go-getter who goes by the name "Hurricane" and leaps at the chance to work on a big case. The LAPDers size up Dale as a yahoo and blowhard, yet Thornton and Tom Epperson's layered script never settles for surfaces. At a family cookout, Dale thoughtlessly utters a racial epithet and is kicked under the table by his wife. (McFeely, who is black, lets out a knowing smile.) Yet we also see him deftly handle a domestic dispute involving an irate husband wielding an axe. Later, in a poignant scene, Dale struggles to keep his dignity when he overhears the urban pair mocking his dream to join the force in Los Angeles. Paxton is an actor I've often been on the fence about; at times, in other performances, I think he overplays. Here, though, as the killers (and a very big secret) come closer to Star City, it's clear that the Hurricane's bluster is partly an act. There's a frailty and fear to the character, yet a core of strength reveals itself too.
One False Move is not the type of thriller that tightens like a vise. The further the characters head South, the more leisurely (though never sluggish) Franklin's pacing becomes. Thornton and Epperson open up their narrative in unexpected ways: as with their scripts for A Family Thing and The Gift, (and Thornton's script for Sling Blade), One False Move is fascinated by Southern cultural mores and the unspoken blurring of color lines. Interracial romance (Ray and Fantasia) and interracial partnership (Ray and Pluto, Cole and McFeely) are never just devices in their framework; they couch sociopolitical concerns that harken back to the great noirs of the 1940s and 50s (and anticipated the Clinton presidency). The movie feels so loose for the majority of its running time that its climax becomes even more stunning. As David Edelstein suggests, the close of One False Move sets off seismic tremors that few films can rival. 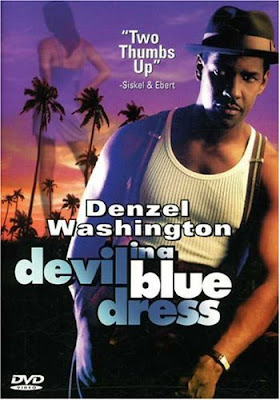 Racial blurring is also entwined thematically in Devil in a Blue Dress, a movie whose arrival to the screen was in itself miraculous. A period piece set in 1948 Los Angeles and populated by a predominantly African-American cast, the movie is a Chinatown-style thriller starring Denzel Washington as Ezekiel "Easy" Rawlins, an unemployed black man struggling to pay the mortgage on the house he owns and loves, who takes up a missing-persons case offered by a pencil-mustached hood (Tom Sizemore) that leads him into a treacherous political labyrinth involving the titular mystery woman (Jennifer Beals) and an imminent mayoral election between the conservative incumbent Todd Carter (Terry Kinney) and self-proclaimed "friend of the Negro" challenger Matthew Terell (Maury Chaykin). As Easy discovers that his case is more complicated than it appears, he calls in a wildcard: his childhood Texas friend Mouse (Don Cheadle), a loyal yet trigger-happy thug with a glittering gold tooth, a gun the size of a crossbow, and a penchant for ignoring moral niceties.
In his review of Carl Franklin's High Crimes, Charles Taylor wrote that "the commercial failure (of Devil in a Blue Dress) robbed us of what might have been an adult franchise of mysteries starring Denzel Washington." Indeed, early last week, in an exchange of emails with Steven Santos, I recalled this movie fondly and couldn't wait to see it again. On second viewing, however, I have to admit that its dismal box-office was somewhat deserved. In addition to directing, Franklin wrote the script (adapting Mosely's novel), and while I'm ordinarily an admirer of any filmmaker who can streamline his own narrative (Devil clocks in at a swift 100 minutes), this is a rare instance of a movie with a richness of theme and character that needed to be longer to do them justice (at least 20-30 minutes). Beals strikes a vivid pose but isn't given enough time to register; her relationship with Washington, which should be crucial, dissipates. Even the real love story, the tense friendship between Easy and Mouse, is blunted by keeping the latter character offscreen until two-thirds into the movie. (This may have also kept Cheadle's breakout performance from contending for awards that year.) 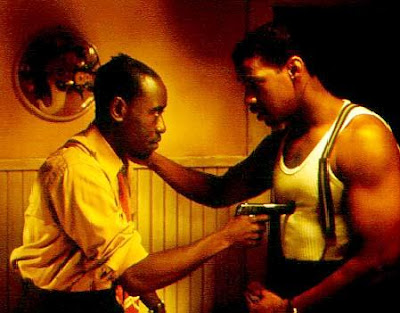 Unlike One False Move, the first half of Devil in a Blue Dress wades through some sluggish patches (and features a line uttered by Washington --"Where are all the white women at?" -- that unwisely recalls Blazing Saddles). Yet the movie hits its stride when Cheadle appears, and once again Franklin sticks the landing: the climax, another explosion of violence that builds on everything that comes beforehand, is vividly staged. It's a shame that the movie's failure prevented Franklin from taking another crack at the material (not least of which it may have kept Denzel Washington out of the clutches of Tony Scott). Yet he's also partly to blame.
Posted by Craig at 3:07 PM

ONCE FALSE MOVE was a powerful film as I recall, though at the time I thought Roger Ebert's startling #1 year-end placement was overkill. Still, as you note at the outset here he (and Siskel) were champions of the off-the-radar film. Some have subsequently accused Ebert of embracing films with African-American themes and/or characters, but I never found much stock in such an argument. At the time I remember commenting that the film was a kind of "tv" movie, much like THE LAST SEDUCTION, but I didn't say that is a negative sense at all. I'd say it's held up even better than DEVIL, though I respect that film as well.

I haven't seen both of these movies in awhile, though I still vividly remember all of "One False Move" with its terrific script and performances, as well as Franklin's choices in showing violence.

I did remember liking "Devil" when it came out although I am a bit hard-pressed to remember the story, as much as I do the Easy Rawlins and Mouse characters. It seemed more like the start of an interesting franchise than a great film. Still, I would want to see it again to remember Denzel before the likes of Tony Scott turned him into such a predictable actor.

Thanks, Sam. What I love about "One False Move" -- and what struck me seeing it again last week -- is it embraces race in a truly forward-thinking way. I hadn't even thought of Clinton before, but the movie (released in 1992, the year the Gov. of Arkansas would be elected president) truly does anticipate the polyethnic American culture that would emerge (or at least be unveiled) in the later half of the 90s. I also know what you mean about the "TV" vibe, which is most prominent at the start, but Franklin does some interesting things with the camera over the course of the movie: The scene with the Highway Patrol officer predates and rivals a similar scene in the Coens' "Fargo" a few years later.

Steven: You're right, "Devil" is sort of an "origins" story, and I suspect a sequel would have eliminated some of the problems inherent in that kind of movie. Like I said, I would have welcomed a longer film and I think one would have resonated more. Still, it has a lot going for it and is well worth watching again.