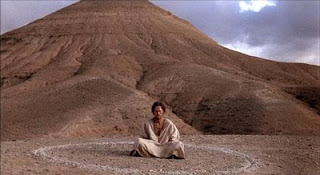 When The Last Temptation of Christ came out in 1988 I was a freshman at Marquette University, a Catholic institution in downtown Milwaukee, WI. By then I was the height of my movie-buffdom, binging on as many of the "auteurs" as possible and Martin Scorsese was one of them. I had liked most of his movies up to then and was anticipating Last Temptation all the more due to the notoriety the film had acquired even before its release. For Scorsese, a screen adaptation of Nikos Kazantzakis's controversial novel was a longstanding passion project that had unraveled in pre-production before, but the success of his previous film, The Color of Money, gave him enough clout (barely) to make the movie on a near-shoestring budget and get it released in the face of overwhelming outrage. Milwaukee is a large city with little public transportation and without a car I fretted that I'd be unable to see it. Yet an arts organization on campus offered a free bus ride to the lone art cinema that was showing it. Al McGuire, the legendary college basketball coach, was still Marquette's deity of choice, but the university remained open to other faiths.
In their outstanding current "Conversation," Ed Howard and Jason Bellamy convey the same response to the film that I had then and now: It's a very good movie that gets stronger as it goes, with a final "temptation" sequence that brings together its disparate ideas and tonal shifts. Seeing it in my teens, I was struck by how different the movie seemed to the stiff Biblical epics of yore. Compared to The Greatest Story Ever Told, Ben-Hur following the chariot race, and countless other 1950s-era religious films, The Last Temptation of Christ was blessedly intimate, informal, and as Ed and Jason point out, not afraid to look ridiculous on occasion. Pauline Kael said she admired Scorsese's "passionate thrashing around" in the picture, as did I. On the face of it, I could see what bothered the protesters, a handful of whom picketed our theater a lot more politely than reported elsewhere. Yet the film before my eyes was clearly the work of a sincere, questioning artist, as would be Kevin Smith's Dogma about ten years later; unlike the latter movie, however, Last Temptation was also the work of a filmmaker who knew how to stage a scene. 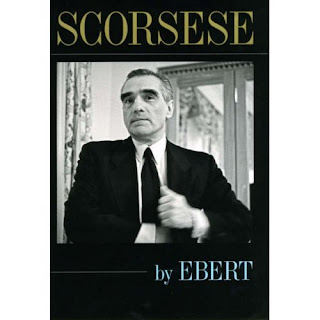 Also around ten years later, my dad and I attended a "special evening" with Martin Scorsese, recipient of the Wexner Prize for creative achievement from the Wexner Center for the Arts at The Ohio State University. Roger Ebert, longtime friend and champion of Scorsese and his work, hosted a lively Q&A discussion with the director that included clips from several of his films. (This was prior to Ebert's health difficulties, when he could still speak.) Many of the black-tied attendees, it seemed to me, were hermetically-sealed stuffed-shirts who were there only for the sake of being seen and had little idea of what was in store. On a humongous screen above the stage, some of the most violent scenes from Scorsese's films battered the audience senseless (Taxi Driver, Raging Bull, et al). And when the extremely intense crucifixion sequence from Last Temptation appeared, a woman in the audience passed out.
It's not hard to see how, devoid of the rest of the film's context, that scene could seem needlessly brutal. (Much like the entirety of The Passion of the Christ, the other movie that Ed and Jason discuss in their piece.) Scorsese is infamous for his violence yet less known for his rich sensuality. They go together for him, as in Goodfellas (made right after Last Temptation) when every Joe Pesci outburst is offset by images like the one of Paul Sorvino cutting garlic with a razor blade. The scene from The Last Temptation of Christ that was particularly out-of-contexualized -- the heart of the furor -- was the hallucinatory passage where Jesus has sex with Mary Magdalene. This, of course, is the "last temptation" of the title: having rejected wealth and power, Jesus is seduced with the offer of living a normal life. The movie depicts this temptation seriously, tenderly, an understandable flight from responsibility that ultimately fails (depending on how you look at it): Christ returns to the cross and fulfills his destiny. Then again, it may be disingenuous to expect any context would have appeased the larger and angrier crowds than the one in front of the theater I attended.
Yet Jason and Ed's discussion triggered my memory of a true curiosity in relation to this film, something that happened from a completely unexpected source. 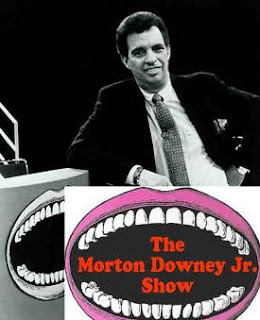 In the late-80s, one of the most popular, infamous and irredeemably tasteless syndicated "talk-shows" was The Morton Downey, Jr. Show. A forerunner to a lot of what passes for television today, Downey was an ultraconservative trash-talking blowhard who chain-smoked through every episode, had a knack for a good pull-quote ("pablum-puking liberal" being a favorite among my friends) and enjoyed stirring up his all-too-easily riled guests. The topics were generally sordid, the conversation degenerate. Yet unlike his current-day media grandchildren (Beck, O'Reilly, Hannity, Coulter), a knowing intelligence would occasionally flicker across Downey's face, an amused self-awareness that he knew that what he was doing was only shtick. (He had shifted shape in his career before, initially as a singer following in the footsteps of his father.) Downey would ultimately self-destruct, professionally at first (his TV show was cancelled in 1989), then succumbing to lung cancer in 2001. Before any of that, though, he aired an episode debating The Last Temptation of Christ. 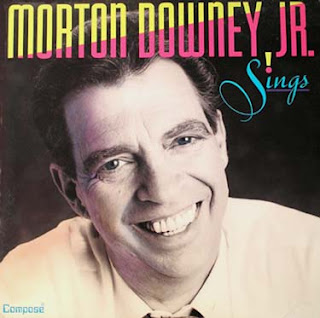 I've no idea what compelled me to watch it. I only remember having my expectations confirmed by the hysterical drivel from the opponents of the movie, as well as the meek, easily shouted-down support from its defenders. The "debate," such as it was, went on like this for awhile, with promises from the host prior to each commercial break that he had seen the movie and would weigh in with his assessment. At last the moment came, and I braced myself for the worst.
"I was filled with such a love for Jesus!" Downey exclaimed. To the shock and dismay of his fans in the audience, he went on to declare that Scorsese's movie had inspired him, that its critics were ignorant and out-of-bounds. Downey would do this from time to time -- turn against the demographic to whom he would usually pander. (I've been reminded of a later episode where he introduced his gay brother.) Savvy performers are known for this tack (see any of Chris Rock's stand-up routines), yet there was no doubting Downey's sincerity: The Last Temptation of Christ had moved him.
What's the moral of this story, you ask: Sleazy talk-show hosts are people too? No moral, no point. Just memories of a moviegoing experience that stick with me today. 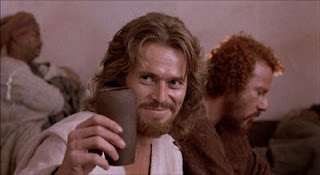 Great piece, Craig. Never thought I'd see Morton Downey tied to "Last Temptation" in any way or even brought up again long after most of us had forgotten him. "Last Temptation" is a movie that tends to inspire stories from those who saw it in 1988.

I was 15 and saw it by myself at the Ziegfeld theater in New York about 2 weeks after it opened. If you didn't know, that theater was ground zero for all the picketers and protesters. From the news reports, it was clearly a chaotic scene. The movie had actually been booked in the theater at the last minute with minimal advertising during August in the hopes no one would notice, despite it being the biggest theater in the city.

When I saw it long after the protesters were gone (they coincidentally left when the television cameras did), there was a barrier at the front of the theater with two ushers who stood there for the first 15 minutes of the movie. I have to admit, "Last Temptation" did not affect me that great a deal that first viewing, probably due to myself not being mature enough to deal with what it was wrestling with. I remember digging more on Scorsese's shots than the emotion of the film.

It was a viewing about 4 years later in another theater during a Scorsese retrospective that was a revelation. It was probably also the time when my religious beliefs were changing and I began to relate to the Jesus in Scorsese's film than the one taught me when I went for "religious instruction" classes once a week. And now, every couple of years, I usually watch it around Easter time (as I do with "The Rapture"), which shows where I fit into this holiday.

Didn't know that about the Ziegfeld. Based on these photos, looks like it was quite a madhouse. Those of us who attended the Milwaukee screening were nervous about what might await us, but the 20 or so of us outnumbered the protesters -- who were, as I said, relatively subdued.

For those too young to remember, words cannot describe the fear and anger in the air at that time. (One needn't look far, however, for a modern-day comparison.) Ironically, without all the hullaballoo, "Last Temptation" may not have done as well at the box office as it did. While not a smash hit, it grossed something like $20 million, not bad at the time for a "religious film" (though certainly paling in comparison to what the canny PR blitz behind "The Passion" achieved), easily recouping its $7-8 million budget. Still, it took a lot of courage for Scorsese to make the movie, for the studio to back it, and for any theaters to book it.

As for Downey, his show was a piece of shit, his life bizarre and finally tragic. (A few years after it was cancelled, Downey made news with a dubious claim he'd been attacked by neo-Nazis who had marked a swastika on his face.) Yet even a scumbag can have a moment of grace.

Craig: I love stories of moviegoing, and, like Steven, never expected the Downey tangent (to be honest, I'd forgotten about that guy).

Maybe it's because I'm reading this on a plane (highspeed internet in the sky = awesome), but it made me wish I had a better memory for the release of The Passion. A few days before it opened I was on a flight into DC, as I am now, and two women behind me were loudly debating the movie they had not yet seen. I can't remember anything they said; I just remember the frequency with which I shook my head.

I was working at a community college when "The Passion" was released, and the Monday following its release everybody on campus except me had seen it. I mentioned the controversy at the time to my boss, who promptly dismissed it. "They're being hysterical," she said. Well, maybe a tad. It's a less convincing argument now, though.

Another anecdote about "Last Temptation." I had mentioned the movie to a friend from high school who was attending Vanderbilt while I was at MU, and he snorted. "Those two guys on TV hated it!" he replied. "They said it was one of the worst movies of the year!" At first I was baffled, as he seemed to think he was talking about Siskel and Ebert, both of whom had loved the film. Then I realized that the "two guys" he meant were actually Medved and (Jeffrey) Lyons, who had indeed panned it on Sneak Previews. We lost touch soon after that.