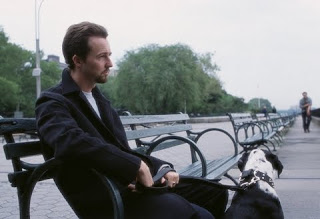 25th Hour (2002) is one of those movies that shoehorns a real-life tragedy onto a work of fiction, only with a fundamental difference: It works beautifully. Hurricane Katrina blows into Benjamin Button for no purpose other than to give the picture an unearned patina of awards-season relevance. Even though the aftermath of 9/11 has, on the surface, nothing to do with a pulpy tale about a drug dealer's last day of freedom before a prison sentence, it renders 25th Hour a movie haunted by squandered opportunities and the fragility of life.
Spike Lee is a filmmaker accustomed to cramming square pegs into round holes. With varying success -- ranging from masterpieces to stinkers -- he has made heavy-handed dramas that contain elements of slapstick farce, and whimsical musical comedies that explore socially conscious themes. He also has made documentaries like When the Levees Broke, a far most honest and artistic depiction of Katrina and its ramifications. His blowhard public persona continues to capture more attention than his films, which have become increasingly inconsequential and ignored. (Inside Man 2 -- really?) 25th Hour came and went fairly quickly from screens seven years ago, and I only caught up with it recently; but I think it's one of the defining films of the decade, warts and all.
Based on the novel by David Benioff (who adapted his own screenplay), 25th Hour stars Edward Norton, in one of his few performances in recent years where he gives a shit, as Monty Brogan, the aforementioned heroin dealer who chooses prison rather than rat out his Russian mafia employers. His two pals, Jacob (Philip Seymour Hoffman) and Frank (Barry Pepper), are grinding their way through more reputable professions. Jacob is a nebbishy high school English teacher who finds himself tempted by a flirty-skanky student (the fearless Anna Paquin); Frank is a cocky Wall Street trader blithely unaware that the Gordon Gekko era is long gone. Monty's younger girlfriend, Naturelle (Rosario Dawson, charmingly awkward), he suspects may have turned him over to the cops. His bar-owning father (Brian Cox, proving he can do straight and understated) fumbles at a belated attempt to reconnect. 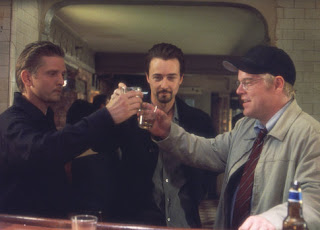 These people, who all care for Monty, nevertheless hover around him like constellations -- solitary while he's in perpetual orbit. Monty's only constant companion is his beloved dog, Doyle, whom he rescues in a prologue that conveys the tenderness beneath his bravado. (In a burst of typically colorful dialogue, Monty's Russkie sidekick inadvertently gives the dog his name when he confuses "Doyle's Law" with Murphy's.) 25th Hour is deceptively aimless for much of its running time: at times it plays like an inverted Last Detail with Meadows hauling Buddusky to the brig. Jacob and Frank take Monty (or does he take them?) to a strained nightclub party that spills into the dawn. Norton very effectively shows time closing in on Monty -- how, despite his deceptively cavalier attitude, he will never have enough of it.
All of this would add up to a moderately entertaining B-movie, like Before the Devil Knows You're Dead with Hoffman unwisely hitting on Anna Paquin rather than Marissa Tomei. What takes 25th Hour to another level is how it captures the mood of New York City in the days following the fall of the towers rather than pretending the horror didn't happen. 2002 was a year when Hollywood digitally removed the World Trade Center from some of its movies. Spike Lee evokes the memory head on, in a stunning opening credits sequence that features the Tribute In Light, and conjures it again later in a scene played above Ground Zero from Frank's high-rise apartment.
These are moments where Lee communicates visually everything that needs to be said, moments that earned him praise from a few critics who normally can't stand him. Charles Taylor's laser-precision review hits all of its marks except the implication that the director has a newfound maturity here. Lee has always been sensitive and observational beneath the off-camera bluster. In Do the Right Thing, Mookie's racial harangue is just one of many tirades from the movie's representative ethnic groups, no more enlightened than the rest. (Also, Charley, John Savage's character isn't new to the neighborhood; he's lived there for years.) Monty has a superficially similar monologue in 25th Hour that starts by singling out everything he hates about New York before boiling down that loathing to his family, his friends, and finally himself. Like Quentin Tarantino, Spike Lee often invites being misunderstood from moviegoers who take his words and images at face value. In truth, he's a filmmaker with a gift for attaining perspective outside of his characters even as he's deep inside them.
I could trot out a list of plenty of things wrong with 25th Hour, scenes where the tone is off, the tempo falters, or the performances fail. (I've seen Barry Pepper in about ten movies now, and I still have no idea if he's a good actor or not.) I couldn't care less. What matters for me about the movie is what matters for Lee -- how the little details add up to the big picture following September 11, another time the levees broke. In Unweaving the Rainbow, his tribute to Carl Sagan's ability to find the poetic in the scientific, Richard Dawkins wrote, "We're all going to die, and that makes us the lucky ones. Most people are never going to die because they are never going to be born." You get a sense of what Dawkins means in the astonishing conclusion of 25th Hour -- which Mike D'Angelo brilliantly described as the climactic dream-vision of The Last Temptation of Christ "compressed to 10 minutes" -- where Lee sifts out hope from horror, poetry from rubble, culminating in a line of stirring force: "This life came so close to not happening."

Nice review. I haven't seen this since it came out, and it deserves another look, if for no other reason than I want to see how the September 11 stuff has aged.

Loved this line: "I've seen Barry Pepper in about ten movies now, and I still have no idea if he's a good actor or not." So true!

I love this movie. One of the best films of the decade and to this day, still one of the few films to really capture the uneasy post-9/11 vibe without seeming exploitative or manipulative. The ending, a long dream of a happy resolution that will never take place, is especially masterful and deeply moving.

25th Hour must be enjoying some kind of karmic convergence.

I'm not a big Spike fan, but I remember liking this one quite a bit when it was released, and being moved by the fantasy sequence Ed mentions... until the friend I was seeing it with turned to me and whispered, "Dude that's the Raising Arizona ending." I couldn't help bursting out laughing.

Raising Arizona crossed my mind, too. All it needed was Ed Norton to say, "Maybe it was Utah."