Beasts Within (Fantastic Mr. Fox and Observe and Report) 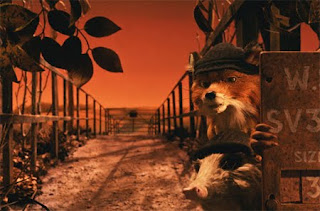 Some actors are so right for their roles the two become inseparable; ditto their voices in certain animated films. Once you've seen Wes Anderson's delightful Fantastic Mr. Fox, it will be impossible to hear anybody but George Clooney's deep, smooth vocals coming out of the titular character, a chicken-stealing fox who's almost as clever as he thinks he is. Clooney has played variations of this fast-talking slickster before -- notably in live-action cartoons like the Coen brothers' O' Brother, Where Art Thou? -- where his charisma is sometimes trumped by smugness. Yet animation, as it did for Robin Williams in Aladdin, brings out Clooney's strengths while negating his shortcomings. He is every inch this Mr. Fox, whose stop-motion herky-jerkiness only adds to the movie's charm.
I'm sure the original Roald Dahl book is one of those I read as a kid without remembering anything about it, but this screen adaptation weaves the author's subversive spirit into what is still in essence a Wes Anderson film, drawing out his strengths as a filmmaker while keeping his flaws at bay. The script, by Anderson and Noah Baumbach, retains Dahl's relatively straightforward story about Mr. Fox's struggle for survival vs. the three nastiest farmers in Britain -- Boggis, Bunce and Bean. Yet they also add, as one character says, "subtext" in the form of Anderson's recurring obsession with familial dysfunction and dynamics. Mr. Fox has a tenuous relationship with his wife Felicity (Meryl Streep), who wants him to give up a life of crime, not to mention with his eccentric adolescent son Ash (Jason Schwartzman, who manages to be as strange and offputting as he is in the flesh). Many Anderson alumni -- Bill Murray, Michael Gambon, Owen Wilson, an especially memorable Willem Dafoe -- lend their voices here, which has probably helped prompt agnostic critics like Owen Gleiberman to claim that the director "has always been making cartoons; he just confused the issue by putting real live actors in them," and to hope that he continues foraying into animated films.
I'm not convinced by either point. For me, Wes Anderson has made one classic comedy (The Royal Tenenbaums) fueled by the tension from the characters' longings to burst out of the trappings in which they are framed. (Violence -- or the threat of it -- is an oft-undiscussed element to his movies, one that's made more palatable by a whimsical tone than George Miller's relentless intensity approach in the flawed but brilliant Babe: Pig in the City; but it's always there, from Richie Tenenbaum's suicide attempt to the severing of Mr. Fox's tail.) And I think there's an even greater live-action film in him yet. Fantastic Mr. Fox is invigorating, lively and filled with high spirits -- adjectives I would not apply to his inert "road" pictures The Life Aquatic and The Darjeeling Limited -- and his melancholy sensibility, akin to Charles Schulz, is a refreshing tonic to the exhausting mania whipped up by Pixar (which has branded "quality" more than actually delivered it) or Mr. Motion-Capture Bob Zemeckis. Yet like Zemeckis, I think there's a danger of Anderson becoming a prisoner of the medium. Whatever his predilection for irony, it's clear that he longs to make a connection with an audience. Whether or not Fantastic Mr. Fox succeeds (and the slow roll-out is as usual, I think, a mistake), here's hoping he keeps trying. 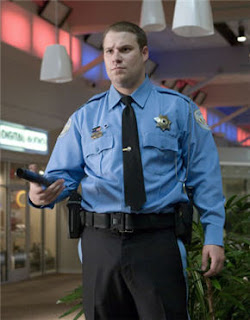 For a brief shining moment last spring, Observe and Report was that rarity, a talk-about lightning rod of controversy, a dark comedy about a mall cop with delusions of grandeur that mined shocking violence and sexual depravity for humor. First dates were ruined, vitriolic screeds (and the occasional defense) were posted, tempers flared. Then, a week later, Crank: High Voltage and 17 Again came out and moviegoing returned to comforting doldrums. I'm not out to make a big case for the movie; it's too calculatingly unhinged and cinematically inept to win me over. Yet the young writer-director Jody Hill works with a kind of feverish incompetence. (Glenn Kenny memorably wrote that he "makes Kevin Smith look like Otto Preminger," but Smith is far too much the slacker poseur to be as invested in his characters or story as Hill is here.) And he's aided considerably by the fierce conviction of Seth Rogen's performance, easily the finest of his career. Rogen's mentally troubled Ronnie falsely sees himself as a gun-toting sheriff in a lawless town; yet he asswhupps drug-dealers and develops a touching rapport with the wheelchair-bound mall employee Nell (Collette Wolffe), so he's not a total dunderhead. Hill's problem is he doesn't distinguish between Ronnie's reality and everyone else's -- the former bleeds (literally) into the latter without logic or irony. In sum, Observe and Report puts me a quandary: it's a bad movie that's got something.
Posted by Craig at 2:30 PM

In total agreement with you about Observe and Report. I like Hill's sense of humor...I think his HBO series "Eastbound and Down" with Danny McBride -- not to mention contributions from John Hawkes, Will Ferrel, David Gordon Green, and Green's DP Tim Orr -- is some kind of strange masterpiece that exists in the alternate universe he is trying to create with Rogen's mall.

However, like you, I think that Hill's failings are that he doesn't take his Taxi Driver homage to its fullest. This could have been a really funny, dark, twisted movies...but I think Hill is at a point in his career where certain ideas are funny to him, but he doesn't think about how those scenes affect the film as a whole.

I actually thought that Rogen was all wrong for this role. I think he needed someone who could be nasty, and Rogen -- who is trying to play against type -- is just too likable as an actor to play Ronnie.

I sure did love that sequence at the end -- for all it's uneven absurdity -- where Ronnie chases the flasher around the mall to the tune of The Pixies.

Great thoughts here, Craig. You're about this film being pretty bad, but strangely memorable because there does seem to be something going on beneath the surface.

Great to hear your thoughts, Kevin. And very good point about Rogen. With other likable actors like Anna Faris and Michael Pena playing pretty disreputable characters, I think I was glad to have Rogen in the movie, even if, as you said, on some level he's working against it.

So, yes: I don't think it's a good movie, but I can't dismiss it out of hand. It has a weird energy I found fascinating, like that climax you mentioned. I haven't seen Hill's other work -- "Eastbound and Down" or The Foot-Fist Way -- but based on this I'd say he does have a great black comedy in him. Whether he ever delivers we'll just have to see.

Excellent review of Fantastic Mr. Fox. I checked out the book version yesterday, and learned that Felicity approves of Fox's thieving there. That's the family's sole source of income. Also, the book ends soon after the banquet scene, with Boggis, Bunce, and Bean still waiting for Fox to come out of his hole indefinitely. Anderson added the explosions, Fox's quaint career as a newspaper columnist, and the emphasis on pollution via the sewer scenes.

Good thoughts on Fantastic Mr. Fox. I was mostly unaffected by the movie, and I'm puzzled by that. I didn't go in with high expectations, and yet I suppose I was disappointed that the film didn't seem to have the verve or magic of its own trailer. At times during the film I was something I never expected to be: bored.

I still liked the film more than I disliked it, but it didn't stir me. And it's interesting that you make reference to Zemeckis, because for all the charm of the stop-motion figures, and for all the ways that Anderson's live-action films have always had a storybook illustrator's style, I've always felt his films work best when we look beyond those paper-doll outfits and see something deeper ... and when I looked deeper into the eyes of Mr. Fox, I didn't see anything. I'd rather have been gazing into George Clooney's eyes. (He's dreamy, after all.)

This is one of those times that I would never doubt the sincerity or the richness of anyone moved by this picture. But I just didn't feel it.

Nice thoughts, Jason. (You cuss!) I suppose that's true about the characters' eyes (save the running gag involving the possum's), but for me their body language more than made up for it. I loved the goofy dance they did during the thieving montage. And quite a few scenes (e.g., the mineral deposit) were just plain beautiful to look at.

I'd be curious what those unacquainted with Wes Anderson's work think of this movie compared to those who are. I was surprised how personal it ended up being, how much richer it seemed when compared to Rushmore, Royal Tenenbaums, et al. (They're all of a piece.) As I've been keeping score, I would now rate his movies at 3-2-1. The funny thing about Wes Anderson is nearly everybody thinks some of his movies are good and others are bad, yet nobody agrees which is which.