Brinks of Madness (Little Murders and Phantom of the Paradise) 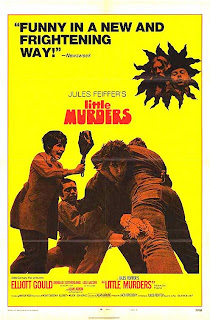 Alan Arkin's Little Murders (1971) and Brian De Palma's Phantom of the Paradise (1974) are more than a pair of near-forgotten relics from the 70s; they're what Bill Ryan might call "Well, then" movies. Each teeters on the edge of insanity and seem impossible to evaluate in rational terms, to the point where "Well, then" is the only proper response.
Little Murders, Arkin's directorial debut, is adapted from Jules Feiffer's darkly comic play about random violence and urban paranoia. I wouldn't say Arkin has opened up the production so much as he brings the city to the stage. Muggings, burglaries, black-outs and stray bullets occur at frequent intervals and bring together a mismatched NYC couple. Alfred (Elliot Gould) responds by closing in on his own shell, while Patsy (Marcia Rodd) stays relentlessly upbeat and determined to change things -- especially Alfred himself. "I love the man I want to mold you into" is one of her funnier lines, and like the best of Feiffer's dialogue it contains more than a few grains of truth.
I can't say I loved Little Murders as much as Ed Howard did. Like most actors who venture behind the camera, Arkin fares better with the performances than staging, though the latter isn't bad. (He had just starred in Catch-22, and this movie seems heavily influenced by Mike Nichols's flair for surrealism.) Rarely have I seen a leading man say and do as little as Gould says and does here: he's an immobile object. Yet it's an amusing performance, not a lazy one; and he has one moment of genuine pathos, when he responds to another character's death by crawling into a corner. Donald Sutherland, Gould's co-star from M*A*S*H, has a hilarious cameo as the hippie-minister who performs Alfred and Patsy's wedding ceremony that takes a few unconventional turns. While a few of the actors shout their lines, Sutherland puts a wry spin on his. Watching him here made me re-appreciate what a unique and subtle actor he is, a master of the change-up pitch while everyone else is trying to throw heat.
Surprisingly Arkin himself, one of our greatest comic actors, gives a poorly calibrated performance as a high-strung detective. But the trio playing Patsy's deliriously chipper, unhinged family -- Vincent Gardenia, Elizabeth Wilson, and Jon Korkes -- are the highlight of the film, a forerunner to the lunatic Schlichtings in David O. Russell's Flirting with Disaster.  Gardenia is as grand a ham as always. But special mention goes to Wilson, who was Benjamin Braddock's mother in The Graduate and here gets a showcase for her mastery of repressed hysteria. She's remarkable. 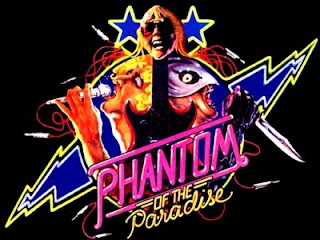 I didn't participate in Tony Dayoub's De Palma-thon for a fundamental reason: I'm not a fan. While I like a handful of De Palma films (Blow Out, Carlito's Way, Mission: Impossible, the entertainingly sleazy Femme Fatale), the bulk of his work either leaves me cold or has me ducking for cover. The excellence of the entries on Dayoub's site prompted me to give some of De Palma's earlier films another look, and while there are elements to admire I'm not convinced he's the master satirist his admirers make him out to be. For a supposed control freak, there's often something out of whack with the tone of his movies, as if he's unaware of his own effects.
Case in point, Phantom of the Paradise, De Palma's update of The Phantom of the Opera by way of Faust, is all over the place between those two poles. Its hero, the songwriter Winston (William Finley), has his musical compositions stolen by evil record producer Swan (Paul Williams) and is horribly disfigured, but returns to haunt the "Paradise," Swan's lavish musical palace set to open. Winston dons a cape and what appears to be some kind of bedpan, which understandably repels the woman he falls in love with (Jessica Harper), a singer who becomes the main attraction at the Paradise.
Phantom of the Paradise has the high energy of a well-made shoestring production. (It will be interesting to see if De Palma can repeat it if his planned bigger-budget remake comes to fruition.) There is a sense of mischief as well as an indication of mass quantities of drugs consumed behind the scenes. What I don't detect is a deeper statement or even a real purpose for the movie's existence, which is perfectly fine. Phantom of the Paradise didn't leave me cold. It just made me say, as it reached its over-the-top end, "Well, then!"
Posted by Craig at 4:21 PM

I regard The Phantom of the Paradise as one of De Palma's most perfectly constructed films: Finley's Phantom is an antihero to root for, Paul Williams makes for an icy little schmuck, and Jessica Harper's final showstopping song soothes the nerves. De Palma makes radical use of split-screen and even sneaks a little bit of Oscar Wilde into his Beauty and the Beast story. As a De Palma masterwork, I'd put the film right up there with Hi, Mom!, Carlito's Way and, yes, Redacted.

If your taste in humor leans toward the demented, you might enjoy "Little Murders." Arkin directs about as well as Jack Nicholson, i.e., not very well at all. But Feiffer's satire is sharp and the performances are generally inspired. It's an interesting, quirky little black comedy.

Interesting. Thanks for the nod, Craig. I actually wouldn't disagree that Arkin's direction in Little Murders is nothing special. He does very little to get beyond the stagey nature of the source material or to make it truly cinematic. Usually, that drives me nuts, I admit, but in this case the original material is so strong, and the performances so uniformly stunning, that it seems like a wise decision to just let the characters talk and otherwise stay out of the way. I come to the film mainly as an admirer of Feiffer, from his cartooning, and the darkly comic satire of this film's dialogue and monologues is some of his fiercest and funniest writing.

Also interesting that you mention Nichols, whose own film from a Feiffer screenplay, Carnal Knowledge, is undeniably more cinematic and interesting than Little Murders, and yet somehow I find myself slightly preferring the ragged, straightforward Arkin film.

Ed, thanks for recommending this movie, one I may have seen in my teens but was too over my head to appreciate then. I prefer this to "Carnal Knowledge" as well.