A Break for This Basterd 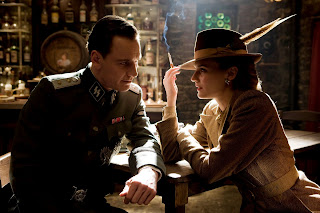 It's been a stimulating (in some ways overstimulating) few weeks of conversation about Quentin Tarantino's magnificent opus, here at Porlock and elsewhere. I'm going to spend Labor Day weekend in what Bill R. might call blogger's "detox" and start fresh sometime around the weekend after. I'll be traveling and hope to get a beer or two with friends, preferably at a better choice of rendezvous than the cellar tavern where Mr. Hicox and Ms. von Hammersmark ended up above. Poor basterds.

UPDATE: One last piece of stimulation: Fernando's review is up.

UPDATE #2: I promise I wrote the words "magnificent opus" before reading Mr. Croce's review, which includes a sentence that begins: "The first of the five chapters in the filmmaker’s new opus, the magnificent Inglourious Basterds...." Matt Groening's Life in Hell comic strip once featured "The Movie Critic's Guide to Adjectives" where you randomly matched words from one column to another ("powerfully haunting," "hauntingly powerful," etc.). It's time for a new language.

Enjoy the break, Craig. I told myself I would do the same thing this weekend before I have to go back to school and teaching on Tuesday.

What's a couple of words between friends? ;-)

Thank you for the link, and enjoy your break.

Thanks for the well-wishes all! I've scattered one or two comments elsewhere and should be cranking out fresh material here soon. I promise I'll try not to write about anything with the words "Inglourious" or "Basterds" in the title for awhile.

I'll leave that to the likes of Chris Stangl, whose excellent essay on the film is recommended for the insatiable. None other than Jim "Yojimbo" Emerson has responded in the comments. It's always an honor to hear from Mr. E, though it was disconcerting to compare his response to Mr. Stangl ("Chris, the eloquence and articulateness of your words radiates from none other than the throne of heaven itself") to his curt reply to yours truly. ("Whachootalkinbout?") I like to think I'm clear of what I write, but if that's not the case please let me know.