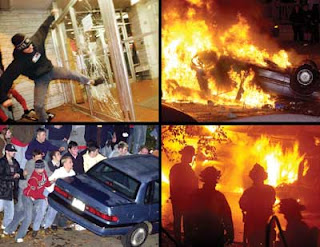 BY A.W. MERRICK
The Daily Renko

DECEMBER 1, 2007--Fisticuffs, fires, property damage and demands for refunds broke out in select movie theaters across the United States following the wider release of the new Joel and Ethan Coen existential thriller, No Country for Old Men. The level of violence on a national scale was unprecedented since the premiere of Stuart Little.

Immediately following the 7:25 Friday evening showing of the film at the Regal MegaMetaMultiPlex in Darrow, IN, an enraged audience of approximately 35 individuals ripped out their seat cushions, beat up an usher, then charged the screen and shredded it to bits. The mob was eventually subdued by National Guardsmen armed with batons, tear gas and complementary boxes of Dots.

Despite such efforts to placate them, many moviegoers remain vocal with displeasure over several points of confusion in the film, including the deaths of certain key characters, a motel room scene involving the sheriff and the villain, and most of all the abrupt climax that ends the film.

"One minute the movie is going along fine, then the next--boom! it's over," said audience member Douglas Fidrych, describing the final scene of Tommy Lee Jones recounting a dream. "I haven't been this bummed since the conclusion of The Village."

With reports of incidents similar to the one in Indiana spreading across the country, military leaders have expressed the need for a "call to arms" involving the most powerful coalition at this country's disposal--film critics.

"We are doing all we can, but advanced weaponry just isn't enough," said Chairman of the Joints Chiefs of Staff Adm. Michael G. Mullen. "History teaches us that if anything can vanquish the masses, it's sarcasm and rhetoric."

Leading the surge has been Gen. James "Yojimbo" Emerson, veteran of the infamous Barton Fink Fracases of 1991 and long-time defender of the Brothers Coen, and Lt. Col. "Glengarry" Glenn Kenny, recently pulled from his command of the interminable Wes Anderson Wars. Together, Emerson and Kenny have formed what has been dubbed a formidable "Alliance of Intolerance."

"We are not saying that individual critics and laypersons are unentitled to their own opinions," said Emerson, who recently toured the front in full battle fatigue while chomping on a cigar. "All we want is universal confirmation that, in a purely objective sense, No Country for Old Men is a masterpiece."

To attain this goal, the classically-trained Kenny initially targeted those confused by the film with the well-worn battle tactic of condescension. Meanwhile, the more visionary Emerson has gone beyond the standard critical arsenal with the controversial deployment of a deadly new weapon called "screen grabs."

While Emerson's degree of success is as yet unclear, Kenny's recent offensive against the skilled field commander Fernando Croce, one of only a handful of critics who has crossed over to the resistance, was violently repelled. Indeed, following Kenny's public mea culpa, rumors have surfaced that Emerson has privately questioned his colleague's stomach for combat. Despite lack of official confirmation of these reports, Capt. Ryland Walker "Texas Ranger" Knight has dismissed questions regarding his youth and inexperience and offered to fill Kenny's shoes.

"The Coen brothers are talented, if foul, filmmakers who make provocative, if foul, films" said the erudite Knight. "The vituperative reaction against their unmitigated genius is actually exceedingly complimentary....if foul."

While opponents of the surge point to high ratings at both Metacritic and the Internet Movie Database as indications that No Country for Old Men already enjoys a strong majority of support, that it would be better to address questions concerning a complex and challenging film as healthy to the interest of critical discourse, and that continuing the war as it is presently being waged is tediously unnecessary, Emerson remains undaunted by the task ahead.

"This war isn't just about our current moviegoing experience," said Emerson. "This is about the experience of our children's--and our children's children's--moviegoing future." Emerson added that the Coens' next movie "is an even more amazing masterpiece, filled with bravura performances and innovative technique. I can't wait to see it."
Posted by Craig at 10:53 AM

Sounds like earth is having a martian type invasion with the anti No Country critics.

Yeah, but there's so few of them, I think we can all live together.

A few is too many. Any critic that doesn't like No Country should hang up their spurs and retire.

I'm honored to have been cast in this conflict, Craig. It's always a thrill to find myself mentioned by a writer I have long loved.

Me, I'm relishing my own Jack D. Ripper role in this rather Dr. Strangelovean turn of events. As for the folks who are demaning my spurs for not liking No Country, well... I do not avoid them. But I do deny them my essence. ;-)

I've been remiss the last few days on replying to the kind folk who have posted here. In brief:

Shamus: Thanks. Getting a compliment from you always feels earned. By the way, I've lost the link to your site. Is there a new one?

Fernando: Agree or disagree, I enjoy your stuff. Your taste is somewhat similar to Ed Gonzalez's but your writing style has a lighter touch. Unlike with Ed, I don't feel like I've been disembowled. Always a nice feeling when reading film criticism.