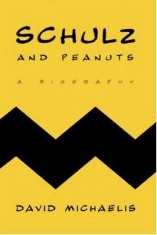 (Note: Much of the following is from an email I wrote a few weeks ago to Matt Zoller Seitz, critic and publisher of The House Next Door. Originally our plan was to collaborate on a discussion about the book and what Peanuts has meant to us, but as this is the busy season for film critics I have decided to post my thoughts here, with the hope that we can continue at a more opportune time.)

If you want to get a conversation going with strangers (or if you don't, in which case consider this fair warning), you needn't go any further than to your nearest coffee shop with a copy of the new Charles Schulz biography setting on your table. The first day I read it, the weekend before Halloween (or the rise of the Great Pumpkin, whatever your beliefs), an affable, prematurely balding gentleman appropriately dressed in an iconic yellow shirt with black zigzag matching the eyecatching dust-jacket on my book, stopped in his tracks where I was sitting and we did a mutual doubletake--me staring at his costume, him gaping at the book. ("I'm going to have to read this," he laughed.) Later that same day, at a different coffee hangout, the fellow at the table in front of me turned and asked if the bio was any good. "I have mixed feelings about Peanuts," he said anxiously, as though revealing a heretical thought. "It always left me" -- he paused -- "depressed."

These exchanges are a telling indication of just how deeply ingrained Peanuts remains within our culture. Having grown up in the 70s, I don't remember the first time I read the strip. Like water and air, it always seemed to be there, not only in the daily paper but in anthologies and knicknacks and advertisements and songs and stage productions and televised Christmas specials. As a child, I enjoyed Schulz's work, most certainly took it for granted, then let it submerge into my subconscious for a number of years. Only now, having read David Michaelis's biography, have I realized that as a child it probably wasn't meant for me in the first place.

The central thesis of Schulz and Peanuts is so simplistic it's automatically suspect: Schulz channeled his life into his art. This is a seductive "Schulz in Love" approach to his work that I was primed to reject from the start, when Michaelis trots out Citizen Kane, Schulz's favorite movie, for a specious comparison: "Like Welles's hero, Charles Foster Kane, who got everything he wanted, and then lost it,' Charles Monroe Schulz would succeed on a scale beyond the grandest of his childhood dreams, and yet he would struggle to love and be loved." Playing a variation of William Alland's reporter from the movie, Michaelis uncovers not one "Rosebud" but several: Schulz's headstrong first wife, who became the prototype for Lucy; his colleagues at Art Instruction, Inc., who included one named Linus and another named Charlie Brown; a cousin who was the template for Peppermint Patty; his experiences as a squad leader in World War II, reimagined in Charlie Brown's camp misadventures and Snoopy's flights of fancy; his religious convictions, which provided the stirring climax for "A Charlie Brown Christmas"; his unrequited love for a "little redhaired girl" while growing up in St. Paul; and most of all his mother, who on her deathbed left "Sparky" (as Schulz was known to family and friends) with a gut-punch of an epitaph: "We'll probably never see each other again."

And yet, by the end of the book, a funny thing happened: I thought Michaelis made a pretty convincing case. Indisputably aiding his agenda are the multitudinous excerpts from the strips he weaves throughout the narrative (and which the family reportedly sold to him for five cents each -- the same fee Lucy charged Charlie Brown for his therapy sessions). If as a kid I found storylines like Snoopy''s crush on a girl beagle with "the softest paws" nothing more than amusing and a tad odd, rereading it now in my late 30s, with the background info that it may have been based on Schulz's affair with a young telephone company executive (whom he met at the Warm Puppy, a coffee shop in his family-owned ice arena), is a surreal experience, like stumbling on a family secret while watching Dr. Phil.

Which brings me back to the initial pair of encounters I mentioned at the start of this post--the first comical, the second melancholy. If I think more deeply about it, I recall often having both reactions at once to Peanuts, laughing at Lucy pulling away the football from Charlie Brown because their contractual agreement wasn't notarized while simultaneously hating her guts for it. And, if I'm honest with myself, hating Charlie Brown too for his gullibility, his refusal to learn from past experience. As I grew older the characters remained inertly unchanged, but looking back I wonder how much of Schulz's attitudes (toward women, sports, religion, war, life in general) stuck with me, whether I agreed with them or not. Taking a broader perspective, I wonder what it means when a country disparaged for being buoyantly optimistic, shallow and naive (I'm talking culturally, not politically, in this context) would have for its Cartoonist Laureate a home-grown depressive with extravagant artistic gifts, contradictions and complexities.
Posted by Craig at 7:03 PM

As an artist, I can appreciate Schulz's immersion in his craft. Unlike him, though, I've never had to bring a cast of characters to life by putting words in their mouths. Maybe, after hundreds of hours at the drawing board he didn't know they weren't real.

I recall after Schulz's death his biological children revealing to his fans that the comic strip had been their father's family. If true, then Schulz's time spent with his imagined clan must have been more lucrative for his heirs than five cents a session.

As you stated, Craig, Schulz seems a complex personality --depressed and depressing, staid but artistic. By channeling his life into his strips wasn't he also a master of manipulation, forcing us, his readers, into group therapy?

Chase and Allen: There's a part in the book where an interviewer asks Schulz "How are the kids?" When Schulz starts talking about Charlie Brown this and Lucy that, the interviewer says, "No, I meant your real kids."

Tyler: I agree that in an odd way it may have been a form of group therapy, but if it was Schulz wasn't particularly interested in what the rest of us were thinking or feeling. Peanuts was all about him, and there's nothing wrong with that. It reminds me of a remark somebody once made about filmmakers, that some portray the real world while others create worlds of their own. I would put Schulz in the latter category, but I admit--as the book shows--that it's tricky. It's not that simple.

Don't all artistic works -- novels, paintings, cartoons -- inhabit their creators' minds? Schulz might have been practicing self-therapy, or an exorcism, but he was adept at including the readers on his journey.