Paris, Oklahoma (To the Wonder) 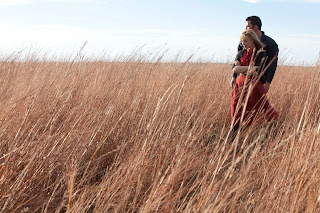 For a man accused of having his head in the clouds, Terrence Malick has maintained an earthbound understanding of how human beings think and behave. I didn't hammer The Tree of Life for its creation-epic extravaganza the way some did, because I thought the sequence worked in the context of Malick's aims. But I sympathized with the sense from the film's detractors that it threatened to overshadow the vividly-realized heart of the story -- a boy's life in 1950s small-town Texas.

With considerable help from his actors, Malick penetrated deeply into adolescent Jack's growing infatuation with his mother, a love borne of conflicting platonic ideals and carnal desires. (Those who insist it's only the former need to revisit the scenes where Jack becomes acutely aware of her physicality, leading to his sexual panic upon stealing a neighbor woman's dress.) Hunter McCracken's intuitive acting (undoubtedly guided by his director) kept young Jack's emotions achingly on the surface in every scene (as the older Jack, Sean Penn floundered a bit), while Jessica Chastain managed the near-impossible by suggesting that a real person existed beneath her son's idolatry. Best of all was Brad Pitt, whose physical performance, Tom Carson observed, came through "in his duck-to-water understanding that acting in a Terrence Malick movie is all about conveying personality via demeanor, not Malick's evanescent dialogue." For all the awardage bestowed on actors who play historical figures and the physically challenged, there is nothing more difficult for a movie star than portraying an ordinary human being. I mean it as the highest compliment to Pitt that when I watched his festering resentment toward his wealthy neighbors, or his memorable explosion at the dinner table (climaxed by grabbing a corner and moving the entire table closer to him), or the way he put a meaty paw on his son's shoulder in an awkward display of affection, I thought: I know this man.

Everything in The Tree of Life - even the cryptic parts - felt lived-in and real, so it's a bummer to report that Malick's surprisingly quick follow-up, To the Wonder, is a ludicrous, aimless dud. It's the kind of folly I can't hate, though: I can respect a director trying new things (or tweaking old things), even though almost none of them work. The Tree of Life's psychological nuance has transformed into this film's opaqueness, Brad Pitt's sturdiness replaced by Ben Affleck's puzzlement. As far as I can gather from the five shots of his face and three lines of dialogue, Affleck is supposed to be playing a studly ladies-man, a character which, Lord knows, should be right down his wheelhouse. Yet not since his J-Lo heyday has Affleck looked anything less than a hostage with an eye cast furtively toward the exits. His character - whose name is "Neil," we learn from the closing credits, but let's call him "Ben," it's as good a name as any - threatens to spring to life during a resplendent middle section where he canoodles with a local rancher played by Rachel McAdams. She isn't given much to do either, but McAdams has always been an actress with a flair for interacting. She often brings out the best in her co-stars, no easy feat here amid scenes among patented Malickian distractions like buffalo herds and wheat-fields. (As always, Malick's camera functions like the dog in Up whose own attention is diverted constantly by squirrels.) Her blonde hair glistening in the sun, his broad back in handsome repose, Rachel and Ben cook up a pleasing rapport.

As Richard Brody reminds us, however, this is not a film for "viewers with expectations, or rather, prejudices for what constitutes a movie," a more eloquent way of saying that for Malick a stock cinematic element like chemistry simply won't do. Rachel gets jettisoned in order to herald the return of Ben's original love, whom we meet at the beginning of To the Wonder, a Gallic Pixie Dream Girl* played by Olga Kurylenko, who becomes the most tiresome character in recent movies. She's the type of flighty free-spirit Jack Donaghy warned against on 30 Rock ("Never follow a hippie to a second location"), with a lust for life so monomaniacally insistent it's easy to understand why Ben might harbor misgivings. Yet Malick lavishes attention on her in a manner uncomfortably reminiscent of Matthew Weiner's propping up of Jessica Pare's limited charms on Mad Men. Along the margins of the onscreen abstraction in To the Wonder is the whiff of a familiar offscreen subtext: a male authority figure playing Charles Foster Kane to an ingenue's Suzan Alexander. (At least Kane offered Suzan an actual opera. Malick gives Kurylenko nothing to work with. She cavorts like a band-camp refugee who lost her baton.)

In Paris, Texas, Wim Wenders, no doubt drawing from personal experience, depicted the clash and collusion of Euro-American culture in oddly resonant ways: Aurore Clement and Bernhard Wicki looked appropriately out of place (and Nastassja Kinski, in a stunning example of counter-intuitive casting, remarkably in place) in a movie about the dislocation of Americans in their own homeland. Malick's real-world experience, undoubtedly enhanced by his shunning of Hollywood lifestyle, somehow fails to register in To the Wonder. His Gay Paree in the early passages possesses neither an insider's knowledge nor a foreigner's wonderment. While it's refreshing to see an avoidance of the usual landmarks, the dazzling architecture on display in The Tree of Life's contemporary Austin is sadly missing in Malick's Paris, with its drab concrete statues and amusement parks.

Where Malick fares surprisingly little better is in what should be his natural habitat - rural Oklahoma, where Ben takes soil samples (or something) as part of his job, Olga plays hopscotch, and Javier Bardem's despondent priest (the third main sort-of character) half-heartedly visits the poor and the imprisoned and questions his faith. (Whereas Tree of Life features a memorable scene where young Jack silently encounters black people for the first time, To the Wonder shows Malick taking a stab at creating an actual African-American character - the jarring stereotype he comes up with making you long for his previous respectful distance.) Oh, how Javier questions. Only his character isn't interesting and the questions aren't compelling. This is unfortunately true of the whole film. Besides McAdams, the only person who makes an impression is Tatiana Chiline as Kurylenko's daughter, whose dislocation in the Heartland is nicely rendered. Chiline holds the screen as naturally as Linda Manz in Days of Heaven. And then Malick shoos her out of the movie, too. All that's left in To the Wonder is a God-sized hole.

"As always, Malick's camera functions like the dog in Up whose own attention is diverted constantly by squirrels."

We're actually pretty close on this one. I still appreciate that Malick is following his instincts. By my reasoning, if he did anything less we wouldn't have enjoyed the singular brilliance of his other pictures, and if that means a dud every six films, I'll take it. But, yeah, this is a dud, and as you suggest it's because until now all of Malick's movies have indeed felt "lived in" and this one hardly even feels alive for the most part.